For his brave work in the field of documentaries, director Oliver Stone was the 2016 recipient of the Gary Webb Freedom of the Press Award, which he received from Consortiumnews.com’s editor Robert Parry on June 3.

Robert Parry: Everyone knows Oliver Stone is a great screenwriter, director and producer. He’s done famous movies. But I also thought people should recognize that he has done very significant support for documentary projects. He has been involved in them, he has helped fund them. 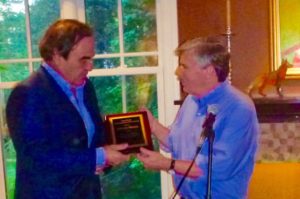 What he’s done, which is almost unique at this moment in American history, is he tries to deal with people who are often leaders of other countries that are under attack by the United States, or being harshly criticized. Some of these leaders are being demonized and they’re being turned into cardboard characters that can be easily denounced and dismissed.

And what Oliver Stone has done, like in his documentary about some of the leaders of South America [South of the Border], is to show this from their side, what they’re thinking, what makes them tick. And that is so important at a time when the United States can engage in horrible wars. We’ve seen the effects of demonizing leaders. And it’s not to say these leaders are great guys, no one’s suggesting that, but that when we demonize and make them not into human beings anymore, then it becomes very easy to go to war with them and their countries. We saw this happen with Saddam Hussein for instance, in Iraq, and to the horrible cost to the people of that region and to the American soldiers who had to execute this war.

So we’ve seen the consequences of not dealing honestly and fairly with people and not trying to explain to the public that these are multi-dimensional leaders. They are people that you may end up not liking, that you may disagree with, but you should at least know what drives them.

Oliver Stone is really one of the very few people with the courage to say, “I’m going to do this, I’m going to present these people as real people, and we can factor that in to how the American people want to feel about this issue.”

He supported a documentary project that I was interviewed in regarding Ukraine [Ukraine on Fire], trying to offer a more subtle, more nuanced view of what happened there and now he’s doing a program for Showtime, which will deal with interviews with Russian President Vladimir Putin, another person who, even more importantly than some of the others, we have to understand [The Putin Interviews].

Because the idea of rushing into a conflict with Russia in this kind of blind way that we did in Iraq and have done in other countries, dealing with a nuclear-armed Russia, is even more dangerous. Not just for the American people, but for all people. So this is why we wanted to honor Oliver Stone with this award.

I want to thank him for coming and accepting it.

Oliver Stone: Thank you very much. I’m very honored. I know who Gary Webb is and that’s a great story. That’s how I look at it as a dramatist, I suppose I’m a little cold that way. But it was a sad story. They made a movie, it died at the box office, it wasn’t happy, but it was a pretty good movie [Kill the Messenger]. Jeremy Renner played Gary Webb.

It just shows you how movies that go against the American image sometimes just don’t make it. First of all they don’t get made, it was very hard for those people to make that movie, it took many years, it died at the box office. I’ve been there. And you can make a movie that somehow is pro-American, put Tom Hanks in it, and you do pretty well, judging from the last Clinton Eastwood film about the pilot [Sully], which made a lot of money. 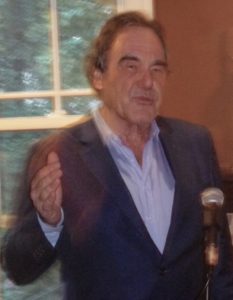 Oliver Stone speaking at the award ceremony after receiving the 2016 Gary Webb Freedom of the Press Award on June 3, 2017, in Arlington, Virginia. (Photo by Don North)

Making a film about Edward Snowden was another lesson for me in disappointment. It’s like making a film about [NSA whistleblower] Tom Drake. It took three years, actually, and when we finished all the work and had been talking to Ed, getting his side of the story, in fact it was his story, it was his point of view, it was not NSA in anyway, they wouldn’t cooperate.

But many people helped us, and Ed approved it and so on, [and then] we couldn’t get any financing out of America at first. We got everything to get started out of Germany and France and some other European countries. We made the movie with a limited budget, we got a small American distributor and the film died here.

We didn’t want to distribute it here first. We wanted to distribute it in France and start there. They wouldn’t let us because it was an American production and they wanted to stick to America first. But those are the kind of problems you have.

I’m even worse on this than Bob because Bob is tempered. It pisses me off sometimes, the arrogance of us, and the way we see the world. We so rarely are able to step outside of ourselves and have any empathy for “the other.” The other is what terrifies us, the other is always “the other.” There’s always the Creature from the Black Lagoon, the Red Planet.

I grew up in the 1950s, I was born in ’46, I still remember the first Cold War and it was horrifying. I was telling someone earlier that was younger than I that in the 1950s my father was social and he had many liberal friends from the 1930s who were socialists, Democrats, sometimes even ex-communists or communists.

They were in that society, the businessman, the “grey flannel suit society,” but there was no future for them. They could not really say what they meant because it would be noted. It would be noted they were a pink-o, or whatever they called it at that time, and then promotions would not come to them. They always were on the lower-income side of the equation.

We — Peter [Kuznick], I, all these people here — we suffered in the American school system for that. I didn’t know history until [I started researching] the Untold History of the United States in 2008, I really started to study American history and all the sources.

Peter Kuznick, my co-author, [and the research], they gave me a college education at the age of 60. I needed it. Americans have no idea [of] their history, no idea. It’s really stunning. And we have taken this book and this documentary everywhere and we’ve made progress. Progressive people have supported this in reviews. The mainstream ignored it completely, completely. So these documentaries, going back to Castro, have been a struggle but they give me, sometimes, the best satisfaction I’ve ever had from my work.

I worry about Bob [Parry] very much. I’m a big supporter of his but I’m scared for him. I always say, “How can you say that and walk around your neighborhood?” This is Arlington, Virginia. Maybe he’s safer here than he would be somewhere else. We need Bob’s voice. He writes beautifully, first of all, which is important for a journalist. And he’s compelling and he tells a narrative. And what’s better is he repeats it, because you have to repeat as a teacher, for people to really start to memorize and remember. It’s a sad narrative and it’s so pathetic that we have reached this place of lying to ourselves. The lies do get bigger, more dangerous.

Our fear is everywhere. It’s in our souls. And as long as we’re outwardly motivated to find an enemy, it’ll be terrorism, it’ll be Noriega, Hussein, Gaddafi, and Syria, of course, Mr. Assad. And now it’ll be, “the Russians are back.” It doesn’t end.

I’ve never seen it so personal as the demonization of Mr. Putin. In the old days we never insulted “Khrushchev’s Russia” or “Chernenko’s Russia.” Now it’s always Putin. There’s a death here, a gay person is killed there, it’s “Putin’s Russia.” It’s really crazy and bad journalism on top of that. Very bad.

So, we’ve got to hope for some of these young people to pick up the slack and start really investigating the news because you can get lazy very easily in this country. There’s a lot of consumerism, you can be happy and try to escape from this century. How long can we keep it up? I really don’t know. I think our karma is due. You can’t kill too many million people and get away with it forever. I’m surprised we got away with the Vietnam War, the way we did. And the reason I think we did was because we fought very hard against that reputation.

Mr. Reagan turned things around in his way and then of course Communism collapsed, so we always had a narrative to go. We ran out of a narrative from ’91 to about 2001, but we certainly made up a lot of lies. The kids don’t know this. So to them this is a new enemy.

I can tell you this from personal observation from being in Russia many times, is that the Russian people are not pushovers, at all. They did fight to the bitter end during World War II. They gave their lives in enormous quantities, they gave everything. They don’t give up. We can’t insult them and insult them and batter them like we have been doing and expect them to concede things that we expect. They won’t do it.

They will go to the end on this and it will be a big mistake for us. We will lose so much more than they do, because we’re so much richer. And I don’t understand why we can spend ten more times on our military than they do and still have this fear of them. It’s a fear that never goes away.

So, to the destruction of fear and to the enlightenment of the species, I salute you too [Robert Parry], for spreading the word. Thank you very much.

[To read Parry’s announcement of the award in May, click here.]