The Founders sought to shield the U.S. government from foreign influence via the Emoluments Clause, which is now being tested by President Trump’s financial conflicts, as ex-CIA analyst Paul R. Pillar explains.

A lawsuit filed by Maryland and the District of Columbia is the second such suit alleging that President Trump is violating the clause in the U.S. Constitution that prohibits officials from accepting emoluments from foreign states. 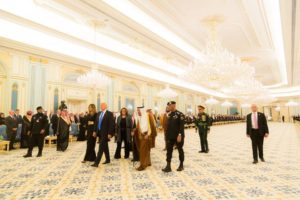 The principal focus of the suits is the Trump hotel that occupies the Old Post Office Building a few blocks from the White House (and is the subject of yet another irregularity, in that government officials are supposed to be legally barred from leasing that publicly owned property).

The new suit may have a better chance than the first one of establishing standing to sue, given that the plaintiffs represent jurisdictions with business interests that may lose customers to the Trump hotel because of its connection to the presidency. Earlier this year, for example, the Kuwaiti embassy, which for many years had held its national day celebration at the Four Seasons Hotel, held the event instead at Trump’s hotel.

The lost business is legally significant regarding standing to sue, and when a public official gains a commercial advantage because of his position, there is a fairness issue regarding businesses competing on an uneven playing field. But which Washington hotel gets to host embassy parties is hardly the most important question involved.

We can get a sense of the relevant concerns of the Founding Fathers by noting that the Emoluments Clause is part of a broader prohibition in the Constitution (in Article I, Section 9) that bars the granting of any title of nobility and the acceptance “of any present, Office, Emolument, or Title, of any kind whatever, from any King, Prince, or foreign State.”

Emolument may be an Eighteenth-Century word that is not in many active vocabularies in the Twenty-first Century, but the concern about the effects of flattery and favor are at least as relevant today as they were when the Constitution was written.

In fact, with the current President, the concern is more relevant than ever. The role of flattery in the Trump presidency was in full display in the public portion of a cabinet meeting this week, in which the self-congratulation from the man in the center and the sycophancy from nearly everyone else at the table was what one might expect from a meeting of the North Korean cabinet.

Foreign governments have concluded that flattering Trump is one of the best ways to influence his policies. The Saudis pulled out all the stops to do so during Trump’s recent visit to the kingdom, including projecting a five-story image of Trump’s face on the side of the Ritz-Carlton Hotel. In view of the output of the visit, including Trump quickly taking Saudi Arabia’s side as it subsequently lowered the boom on Qatar, the Saudis no doubt consider their efforts to have been worthwhile.

Another all-too-obvious strand of Trump’s presidency, and one at least as relevant to his ownership of unfairly advantaged hotels, is his throwing of ethics into the trash. A shameless mixing of public business and private financial interest has been a major feature of this presidency (and such steps as letting his sons manage his business day-to-day do nothing to remove the conflict of interest stemming from his ownership of businesses that profit from presidential actions).

That disregard for ethics also has set a terrible example for people around that Cabinet table and others in this administration who also have conflicts of interest. All this is a major problem even when no foreign governments are involved. Many aspects of domestic policy are being shaped by people who have private interests at stake, which often point in a different direction than the nation’s interests.

The writers of the Constitution were concerned about this broader problem of keeping public business separate from private pecuniary interests. Another place in the document where the term emolument comes up is in Article II, which is about the presidency and the Executive Branch. Section 1 says that the president’s salary should not be changed during his term and that “he shall not receive within that Period any other Emolument from the United States, or any of them.”

In contrast to Barack Obama, whose respect for the Constitution, including the Emoluments Clause, led him to request a formal legal opinion from the Department of Justice to determine whether he should be permitted to accept his Nobel Prize, Trump gives no indication of having even passing thoughts about such things, or about government ethics. His conduct in that regard is the opposite of what the writers of the Constitution sought in trying to erect a strict divide between private interests and the nation’s business.

When a foreign government is involved, in violation of the Emoluments Clause in Article I, the fundamental problem is that U.S. foreign policy may be influenced by the President’s private financial interests and thus may be shaped in ways different from what is in the national interest. The shaping need not entail a specific quid pro quo with a foreign state; general affinities or preferences, or a natural inclination to favor those who have bestowed favors — or profitable business — in the other direction may be sufficient to shape policy in ways detrimental to U.S. interests.

Moreover, the ability of foreign states to influence U.S. policies in this way is not an equal opportunity matter. Governments that are better able to do things such as holding expensive receptions at high-priced Pennsylvania Avenue hotels have more of an opportunity to play this game than do governments that are less well-heeled. Favoring the former over the latter is not necessarily in U.S. interests.

There can be a further detriment to U.S. interests that involves how other foreign governments perceive the drivers of U.S. policy, and their willingness to conform to or cooperate with that policy. If foreign leaders are left to wonder whether a U.S. president’s policies reflect the president’s private pocketbook rather that U.S. national interests, let alone interests that the two countries share, U.S. credibility suffers.