Exclusive: Despite resistance from the oil industry and Team Trump, the transition to electric vehicles is accelerating, with key foreign countries and some U.S. states taking the lead, writes Jonathan Marshall.

Even as the Trump administration scrubs federal web sites of data about climate science and clean energy and appoints coal industry lobbyists to senior policy positions, other nations are responding vigorously to the reality of global warming. 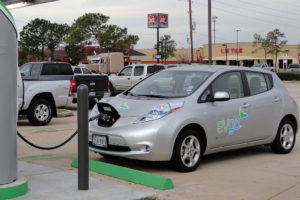 The Nissan Leaf, an electric car at a charging station.

Great Britain and France have recently announced ambitious timetables for phasing out fossil-fueled cars by 2040. Even bolder are Norway, which expects all new cars sold by 2025 to be electric, up from 37 percent today, and India, which set 2030 as its target date for going all-electric.

Together with the rising domestic popularity of all-electric and hybrid electric vehicles, the potential political contagion from such foreign programs is spurring major U.S. fossil fuel producers into spending millions of dollars to kill clean transportation alternatives.

The stakes, both financial and environmental, are high. The U.S. transportation sector currently consumes 14 million barrels of petroleum products every day. Transitioning away from all that gasoline and diesel to cleaner electric transportation will be critical to lowering carbon emissions before global warming wreaks havoc on human civilization and natural ecosystems. It will also help alleviate vehicle air pollution that kills an estimated 50,000 people each year in the United States alone.

Unlike the power sector, where the renewable energy revolution is well underway across the nation, transportation remains largely stuck in the last century. In my car-friendly state of California, for example, thanks to a boom in solar and wind energy, electric power today accounts for only about 20 percent of statewide greenhouse gas emissions. Transportation, by contrast, contributes 36 percent, far more than any other sector.

When charged by clean solar, wind, hydro or nuclear power, electric cars and trucks contribute almost no greenhouse or toxic air emissions. Even in states with a high proportion of coal-fired generation, efficient electric vehicles (EVs) account for fewer emissions than the average new gas-powered car.

With coal-burning plants increasingly giving way to cleaner natural gas-fired plants and renewable generation of energy, more than 70 percent of Americans now live in areas where EVs cause fewer emissions even than the cleanest conventional cars, according to recent research by the Union of Concerned Scientists (UCS). On average, across the country, EVs create as little carbon pollution as gasoline-powered cars that get 73 mpg — if such cars even existed.

Critics, like the Koch-funded Fueling U.S. Forward, complain that it takes more energy to manufacture an electric car than a gas-powered car, mostly because of the need for big batteries. But those manufacturing emissions are more than offset by the reduced emissions from driving a mid-sized electric car after just 5,000 miles, the UCS report notes.

Electric Vehicles on a Roll

Electric vehicles today number only about 2 million, or just 0.2 percent of all light passenger vehicles in use globally today, according to the International Energy Agency (IEA). The good news is that their numbers are growing about 60 percent per year. In the United States, customers bought 53,000 electric and plug-in hybrid vehicles in the first six months of 2017 — not counting Tesla sales — up from 33,000 in the same period a year ago.

Momentum is growing in the EV industry. Tesla briefly this year enjoyed the highest market cap of any U.S. automaker. In July, Volvo announced that it plans to produce only hybrid or all-electric vehicles by 2019. China, which now leads the world in EV sales, has tough incentives to increase them further. A multi-nation coalition called the Electric Vehicles Initiative — including Canada, China, Finland, France, Germany, India, Japan, Korea, Mexico, Norway, South Africa, Sweden, United Kingdom, and, for now, the United States — is encouraging the global deployment of 20 million EVs by 2020.

IEA cites estimates that the global stock of electric cars will range between 40 million and 70 million by 2025, if governments continue to support R&D, purchase incentives, and charging infrastructure. The transition to EVs may accelerate if, as some experts forecast, they become fully cost competitive with gasoline-powered cars within a decade.

Bloomberg New Energy Finance projects that “cars with a plug [will] account for a third of the global auto fleet by 2040 and displace about 8 million barrels a day of oil production — more than the 7 million barrels Saudi Arabia exports today.”

The Trump administration can be counted on to do what it can to slow this revolution, but 10 states have aggressive programs to promote the adoption of electric vehicles: California, Connecticut, Maine, Maryland, Massachusetts, New Jersey, New York, Oregon, Rhode Island and Vermont. Just as with renewable energy, their success may pave the way for similar programs in other states, even “red” ones.

Fiscal conservatives should applaud their efforts to jump-start the EV market. A study by the American Lung Association in California last year documented health costs of $24 billion a year — for lost work days, respiratory illnesses, and premature deaths — from vehicle emissions in just those 10 states. The report estimated an additional $13 billion in climate-related costs (agricultural losses, flooding, fires, etc.). Converting two-thirds of cars on the road to electric vehicles by 2050 would save those states about $21 billion a year, well worth the effort.

And if they succeed, proponents may also prove instrumental in helping U.S. automakers like Tesla, GM, and Ford remain world leaders in the fast-growing market for electric vehicles. The United States can’t afford to be stranded in the slow lane of adapting its economy to climate change while the rest of the world speeds ahead.

48 comments for “The World’s Shift to Electric Cars”