While it’s impossible to precisely calculate the costs from global warming, they range from macro threats such as massive shore erosion and mass dislocations of people to micro ones like lost sleep, writes ex-CIA analyst Paul R. Pillar.

Resistance to arresting human-caused warming of Earth is politically entrenched in personnel and policies of the Trump administration. This makes the United States a conspicuous delinquent among advanced industrialized countries, as highlighted at the recent G-7 summit meeting, and among the community of nations generally, as highlighted by Trump’s refusal to commit to adherence to the Paris climate change agreement and by the United States surrendering leadership to the likes of China and even India.

The reasons for such resistance are multiple, and even uncovering all of them would not stop perverse refusal to help save the planet. Reflecting on what appear to be the main reasons, however, may help point to strategies for overcoming the resistance.

Probably the principal belief — a mistaken belief — that accounts for the absence of what ought to be a groundswell of condemnation of the administration’s climate policies by earthlings who live in the United States is the notion that there is a zero-sum trade-off between economic well-being and action to curb global warming. Even if the notion were true, there still would be ample grounds to condemn the selfishness and short-sightedness involved in much of the resistance to action.

And even though the notion is false, politicians will exploit the notion, as Trump does in trying to reduce the issue to a question of coal-mining jobs in Appalachia. He does so even though the jobs in question were lost to technological change and will not be coming back, even though those jobs always will be a relatively small part of employment in the parts of Appalachia Trump is politically targeting, and even though economic growth in the United States would be helped much less by clinging to retrograde burning of fossil fuel than by being in the forefront of developing and implementing advanced forms of renewable energy generation.

Notwithstanding such political exploitation of misbelief, it would be wise to highlight the falsity of the notion that mankind faces a choice between economic well-being and preventing a further rise of a few degrees in global temperatures. The prospects for economic well-being worsen with that temperature rise. This is a matter not only of the economics of energy generation but of far broader and greater consequences. 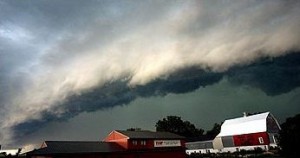 The positive consequences (longer growing seasons at the higher latitudes, new opportunities for maritime transportation in the Arctic) are vastly outweighed by the negative ones, which are centered on, but not limited to, the impact on agriculture of drought and desertification, huge displacements caused by rising sea levels, and damage from increased extreme weather.

The enormity of the consequences, and the multiplicity of ways in which they will be felt, make it difficult for even the most diligent analysis to come up with an accurate translation of those consequences into dollar costs. Don’t expect something like a Congressional Budget Office scoresheet. But to use this difficulty as a reason not to embrace understanding of the consequences would be no more justified than is the posture of Scott Pruitt, the eviscerator (a.k.a. the administrator) of the Environmental Protection Agency, that the reality of climate change should not be accepted because it cannot be calculated with “precision.” The very enormity of the likely consequences is all the more reason to focus on them.

It behooves us to consider and to highlight all the likely consequences having economic impact (which is not to suggest that consequences that are at least as political and societal as economic, such as ones stemming from mass migration from increasingly uninhabitable areas, aren’t just as important), to chip away at the main misbelief about the economic trade-offs.

Here’s a recent bit of research to add to the mix. It’s a study of how climate change is increasing sleep deprivation in the United States. Using large-scale data collected by the Centers for Disease Control and Prevention about self-reported sleep habits, and correlating the data with weather records, the researchers calculated that every increase in nighttime temperature of one degree Celsius leads to an additional three nights of restless sleep per 100 people per month.

The impact on productivity and thus on the economy of the United States, from having so many more groggy and sleep-deprived people going to work the next day, cannot be calculated with precision but surely is substantial.

This is just one more reason, among many, not to let economic concerns be an excuse for inaction about climate change. And we shouldn’t have to sleep on that.

← Trump: The Narcissist with Haters
Libya’s Link to Manchester’s Tragedy →