Exclusive: In many ways, President Trump is a classic case of the paranoid with enemies, except he also is the narcissist who rejects any criticism and lacks the discipline to disarm an array of haters, writes David Marks.

If for a moment we step away from the dynamic of political forces at play in Washington and consider the strange psyche of the President, we see that Donald Trump is emerging as the chief architect of his own demise. 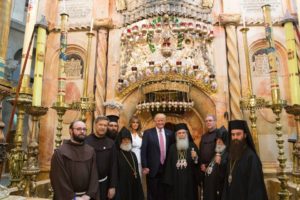 President Donald Trump and First Lady Melania Trump pose for a photo with religious clerics, May 22, 2017, inside the Church of the Holy Sepulchre in Jerusalem. (Official White House Photo by Shealah Craighead)

Whether there is any truth to the allegations of Russian interference in the U.S. election or collusion with his campaign, the controversy has served to highlight Trump’s limitations as a political leader in the high-stress environment of the White House.

In that sense, Trump’s troubling personal and business practices from his private life have only become more troubling – and more glaring – as he adapts them to the presidency and its immense power. It seems that he doesn’t realize that his old methods are incompatible with his new office.

Indeed, since his inauguration, Trump’s words and behavior have reflected an intensification of his dogmatic thinking and narcissistic personality. Disturbing reports from the White House shed further light on the mismatch between Trump’s way of operating and the demands of the presidency.

The President’s self-righteousness against any criticism and his unwillingness to compromise is indicative of a leader who believes he is above the law and the norms of society. But unfortunately for Trump, like every President of the United States, he is under scrutiny at all times. In Trump’s case, however, he lacks the seasoned advisers who can restrain him. Instead, his arrogance is supported by his staff and congressional allies. His confidants seem incapable of contradicting his perspective.

No one seems to be able to stop him from blurting out damaging comments, often in early morning Tweets; so he repeatedly has contradicted White House statements designed to support his position. His reactions to damaging news reports are reminiscent of his campaign, often managing to be both self-serving and self-destructive.

In his most vulnerable moment last year, Trump defended himself after a recording was released revealing his crude approach to seducing women. His explanation of words that included “grab them by the pussy,” gives insight into more than his misogyny. He asked that we forgive his comment with the explanation, “This was locker room banter, a private conversation that took place many years ago.” At the time of his comments in 2005, Trump was 59.

Trump, now 70, wants us to trust that he’s changed since uttering those words, although the opposite appears to be true. Now as President, Trump’s use of unrepentant excuses for his words and behavior is expanding concurrently with his narcissism.

Trump recently discovered that as president, he can declassify almost anything on a whim. At a White House meeting, he shared sensitive intelligence about ISIS with the Russian Foreign Minister and the Russian Ambassador. After press reports complained that Trump provided enough detail so the Russians would know that the likely source of the intelligence was Israel, Trump essentially confirmed the speculation by volunteering during a trip to Israel that “Folks, folks, just so you understand, just so you understand, I never mentioned the word or the name Israel during that conversation.”

President Trump meets with Israeli Prime Minister Benjamin Netanyahu in Israel on May 22, 2017. (Screenshot from Whitehouse.gov)

Trump’s inability to understand the weight that a presidential remark can have – when compared to, say, a businessman making some off-hand comment to colleagues on a golf course – was further revealed in his apparent attempt to dissuade FBI Director James Comey, from investigating former National Security Advisor Michael Flynn.

Comey reportedly recounted Trump’s words in a memo to the file — “I hope you can let this go” — but Trump, although not confirming the precise language, insisted that it was entirely appropriate to make that sort of general suggestion. Trump didn’t understand how his comment could be construed as an attempt to influence the FBI director in his official duties.

Trump would like us to once again be assured that this is the kind of talk that men have when they are alone. Before Trump made the reported suggestion to Comey, the President had dismissed everyone else from the room, so in his view it was a private encounter. But the impression of impropriety was reinforced when Trump fired Comey, judging him not a team player but rather “a showboat” and “a grandstander.”

In the four months since his inauguration, Trump has shown that he hasn’t absorbed the gravity of the office that he holds. He still acts like a freelancing businessman or a privileged celebrity, skating toward and sometimes beyond the edge of acceptable behavior.

As the controversies around him grow, he may soon learn that his ability to twist arms, negotiate questionable deals or use his position to protect friends is limited by the laws and the Constitution. When that happens, he is likely to get angrier and look to his attorneys to find ways out of his predicaments, much as he would when — as a businessman — he exploited bankruptcy statutes to extricate himself from dangers due to financial over-extension.

It’s also undeniably true that Trump has political enemies who are looking for his most vulnerable actions in order to weaken or destroy him. He is the classic case of a paranoid with enemies, but he is making it easy for them by repeatedly falling into whatever trap gets set.

If self-pity is what a narcissist feels when criticized, Trump proves the point. He paints himself as a victim of historic dimensions. During the presidential campaign, Trump claimed at a rally he was “a victim of one of the great political smear campaigns in the history of our country” – apparently not aware that the United States has a long and dispiriting history of political smear campaigns dating back to the Founding era.

In his Coast Guard Academy commencement address, Trump felt even sorrier for himself declaring that “No politician in history – and I say this with great surety – has been treated worse or more unfairly.” It’s hard to believe that Trump would be unaware that four U.S. Presidents have been assassinated, including Abraham Lincoln and John F. Kennedy, not to mention many foreign political leaders who have met very grisly fates.

There’s also the likelihood that we only know a small fraction of Trump’s bizarre behavior in office and the resulting White House dysfunction. Presumably, if this pattern continues and his staff disintegrates, there will only be more revelations about how the President continues to contribute to his own crises.

Trump’s worsening troubles will also likely lead him to tighten the circle of trusted advisers, some of whom – such as his son-in-law Jared Kushner – are already finding themselves in legal jeopardy which, in turn, is forcing them to “lawyer up” and listen to advice on how to save themselves.

While it’s true that much of Official Washington was always gunning for Trump because his bizarre behavior and his jumble of policies were seen as a threat to the way things are done, it’s also true that Trump was his own worst enemy. He never demonstrated any grace toward his opponents; he resisted reaching out beyond his enthusiastic base; he picked silly and unnecessary fights such as claiming falsely that his inaugural crowd was bigger than President Obama’s; he squandered the crucial first days in office with an ill-conceived anti-Muslim immigration ban and other acts that were offensive to millions of Americans.

Now, just four months into his presidency, Trump is behaving like a wounded animal and it is unnerving to leaders around the world what he might do if the vague allegations against him and his inner circle harden into criminal indictments and articles of impeachment.

But one thing appears certain: he will not go quietly. However, if that moment comes, it is likely that he will have precipitated his downfall less from his erratic policies than from his egotistical personality.

79 comments for “Trump: The Narcissist with Haters”