Like his predecessors, President Trump made nice with the rich royals of Saudi Arabia, despite damning evidence that they have supported Islamic terrorists, including the 9/11 attackers, notes 9/11 widow Kristen Breitweiser.

President Trump has cut a $110 billion arms deal with the Saudis. As someone who is trying to hold the Kingdom of Saudi Arabia accountable for the mass murder of 3,000 on 9/11 (of which my husband Ron was an innocent victim), I’d think President Trump would be up in arms with the Saudis, not selling arms to them — especially given the information set forth below.

Many people know the explicit evidence found from 2009 that Saudi Arabia was, “a critical financial support base for al Qaeda, the Taliban, LeT and other terrorist groups.”

Just like many know the more recent and far more damning 2016 revelation that Saudi Arabia continues to provide “clandestine financial and logistical support to ISIL and other radical Sunni groups” in the Middle East.

And, anyone who cares about women’s rights and human rights should also know about the latest human rights report produced by Rex Tillerson’s own State Department that details, “Saudi Arabia’s restrictions on universal rights, such as freedom of expression, including on the internet, and the freedoms of assembly, association, movement and religion, as well as the country’s pervasive gender discrimination.”

Indeed, according to Wikipedia, the Kingdom of Saudi Arabia is consistently ranked among the “worst of the worst” in Freedom House’s annual survey of political and civil rights, among the 11 least free nations in the world giving the country a score of 10 out of 100 on its freedom index. Interestingly, Iran is ranked better on human rights issues than Saudi Arabia; Iran’s Freedom House ranking is 17.

But perhaps what many — including President Trump and his advisers — might not know about Saudi Arabia is the information surrounding the capture and interrogation of Al Qaeda’s Abu Zubaydah, who currently remains in custody at the Guantanamo Bay prison. I’d like to share some of that information — chronicled in Gerald Posner’s Why America Slept: The Failure to Prevent 9/11 — with the hope that learning this information might further crystalize why the 9/11 families are so driven to hold the Kingdom of Saudi Arabia accountable for its alleged role in the 9/11 attacks. 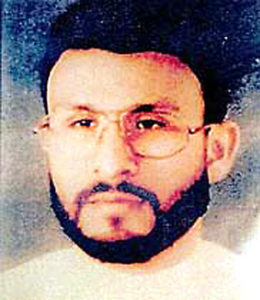 As Posner reported, Abu Zubaydah “was long considered to be a key member of al Qaeda’s inner circle. He was born in Saudi Arabia in 1971 but grew up in the Palestinian refugee camps in the Gaza Strip. After early involvement with Hamas, he was recruited by al Zawahiri’s Islamic Jihad and when al Zawahiri fused his group with bin Laden’s al Qaeda in 1996, Zubaydah was appointed chief of operations. Zubaydah was in charge of the eastern Afghanistan camps responsible for training thousands of Muslim radicals. Bin Laden trusted Zubaydah, and put him in charge of the Millennium plot to bomb the Radisson Hotel in Jordan and Los Angeles International Airport on New Year’s Day, 2000. Zubaydah also served as the field commander for the USS Cole Attack.”

Thankfully, Zubaydah was captured by U.S. Special Forces in 2002. During the capture, Zubaydah was severely injured and required medical care. He was given medical attention and placed on intravenous fluids including pain killers — and sodium pentothal.

At the time, U.S. intelligence decided to play a trick on Zubaydah. This trick entailed leading Zubaydah to believe that the U.S. was ready to hand him over to Saudi intelligence officials for further (even more severe) interrogation since Zubaydah wasn’t “fully cooperating” with U.S. interrogators. The Saudis’ reputation for interrogation was rather severe — it included extreme torture and sometimes death. U.S. intelligence surmised that in facing the threat of being handed over to the Saudis, Zubaydah would want to stay with the U.S. interrogators who were giving him medical attention and, therefore, Zubaydah might be more willing to “talk.”

What happens next is what few people know. When “handed over to the Saudis” (who were really just U.S. intelligence agents pretending to be Saudi intelligence), Zubaydah was actually relieved and started demanding to talk to his contact within Saudi intelligence — in addition to several members of the Saudi Royal Family.

According to Posner’s account, “when confronted with men passing themselves off as Saudi security officers, Zubaydah’s reaction was not fear, but instead relief. The prisoner, who had been reluctant even to confirm his identity to his American captors, suddenly started talking animatedly. He was happy to see them, he said, because he feared the Americans would torture and kill him. Zubaydah asked his interrogators to call a senior member of the ruling Saudi Royal family. He then provided the home number and cell phone number from memory. “He will tell you what to do.”

Upon further questioning by his “Saudi interrogators,” Zubaydah raised his voice and unleashed a “torrent of information that one investigator refers to as the Rosetta Stone of 9/11” or what he claimed was his work for senior Saudi and Pakistani officials.

According to Posner, Zubaydah said, “he was present in 1996 in Pakistan when bin Laden struck a deal with Mushaf Ali Mir, a highly placed military officer with close ties to some of the most pro-Islamist elements in the Pakistani ISI. It was a relationship that was still active in 2002 and provided bin Laden and al Qaeda protection, arms, and supplies. And that military deal with al Qaeda was blessed by the Saudis, claimed Zubaydah. Bin Laden had personally told Zubaydah of the early 1991 meeting he had with Saudi intelligence chief Prince Turki, and again, Zubaydah claimed he was personally present several times when Turki and bin Laden met in Afghanistan and Pakistan during the 1990s.

“According to Zubaydah, he was the al Qaeda representative in Kandahar in the summer of 1998 when Prince Turki and Taliban officials struck a deal in which Turki gave assurances that more Saudi aid would flow to the Taliban and that the Saudis would never ask for bin Laden’s extradition, so long as al Qaeda kept its long-standing promise of directing fundamentalism away from the Kingdom.”

Posner reported that Zubaydah “insisted that the Saudis not only sent money regularly to al Qaeda, but that he personally dealt through a series of intermediaries with several members of the Royal family. He then gave more private telephone numbers from memory for a businessman and former military pilot, Prince Sultan bin Faisal bin Turki al Saud, another nephew of King Fahd’s and a friend of Prince Fahd’s, and also for a contemporary to his own age, another distant relative of King Fahd’s, twenty-five-year-old Prince Fahd bin Turki bin Saud al Kabir.”

Posner continues, “The Agency was as interested in monitoring the behind-the-scenes responses of its two allies as in what they officially replied on the record. U.S. officials were already frustrated with the lack of Saudi assistance on the hijackers, fifteen of whom were citizens of the Kingdom. Saudi authorities had released no information about them. And that all of them evaded detection by Saudi internal security forces, who maintain massive domestic files, had puzzled American officials.”

Of course, the Saudis denied all the information, secret deals, and connections put forth by Zubaydah. Soon thereafter, interestingly (and rather unfortunately), all of the individuals named by Zubaydah during his interrogation turned up dead — except, of course, Prince Turki who was removed from his post as head of Saudi intelligence and named as Saudi Ambassador to Britain.

Posner reported, “on July 22, 2002, less than four months after Zubaydah’s revelations, the Saudis announced the unexpected death of Prince Ahmed. He was forty-three. The cause of death was a heart attack, said the official Saudi news agency. The following day, the second man named by Zubaydah, forty-one year old Prince Sultan bin Faisal bin Turki al Saud was killed in a car accident as he was driving from the resort of Jeddah to Riyadh for the funeral of his cousin, Prince Ahmed. According to Saudi police, speed was the likely cause of the accident which did not involve another car.

“One week later, the third person named by Zubaydah, twenty-five year old Prince Fahd bin Turki bin Saud al Kabir was also found dead. He died while on a trip in the province of Remaah, fifty-five miles east of Riyadh. The Saudi Royal Court announced his death, saying the prince who was traveling during the height of the Saudi summer heat had ‘died of thirst.’”

Since that time, the obvious questions raised by the Zubaydah information have yet to be properly and/or publicly investigated and/or answered. All the while, Abu Zubaydah remains in U.S. custody and at least somewhat willing to talk as a prisoner at GTMO. [Similar unanswered questions were raised by another Al Qaeda member in U.S. custody, Zacarias Moussaoui, who testified about his own collaboration with Saudi officials.]

And that’s why President Trump should be up in arms — and perhaps even twisting arms — in Saudi Arabia, not selling them arms. Because the record and facts surrounding the 9/11 attacks (whether provided in the so-called “28 pages,” the 9/11 Commission report and its voluminous footnotes, or other sources like Posner’s book) all point a very strong finger at the Kingdom of Saudi Arabia and its role in the 9/11 attacks. The Saudis should be held accountable for that alleged role in a court of law.

Sixteen years post-9/11, the 9/11 families are still earnestly trying to receive a modicum of justice in a court of law by providing all the evidence we have gathered against the Kingdom of Saudi Arabia. We simply want our day in court.

We certainly hope President Trump and Congress will continue to support us in our path to justice in holding the Kingdom of Saudi Arabia accountable for its alleged financial and logistical role in the murder of our loved ones.

Kristen Breitweiser is a 9/11 widow and activist who – working with other 9/11 widows known collectively as the “Jersey Girls” – pressured the U.S. government to conduct a formal investigation into the terror attacks on Sept. 11, 2001. Follow Kristen Breitweiser on Twitter: www.twitter.com/kdbreitweiser. [A version of this article originally appeared as a blog post at HuffingtonPost.]