Today’s demonization of Russia is especially offensive when viewed against the suffering of the Russian people that Natylie Baldwin recalled in a visit to the monument honoring the defense of Leningrad against a brutal Nazi siege.

We entered the monument to the siege of Leningrad from the back. There is a large semi-circle with eternal flame torches at intervals and embedded sculptures of Lenin’s face, and other symbols of the Soviet era. The monument was built in the post-war period so the Soviet iconography is understandable. In the middle is a sculpture of a soldier, a half-naked woman looking forlorn into the distance, and another woman collapsed on the ground with a dead boy in her arms. 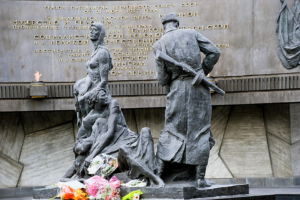 A sculpture commemorating the defense of Leningrad during World War II. (photo courtesy of saint-petersburg.com.)

There are several concentric steps that follow the semi-circle and I sat down on one of them and took in the feel of the area. Classical style music played in the background with a woman’s haunting voice singing in Russian. It was explained to me that it was a semi-circle instead of a full-circle to represent the fact the city was not completely surrounded and ultimately not defeated.

I finally got up and went through the opening in the semi-circle and came out to the front where a tall column with 1941 and 1945 on it stood with a large statue of two soldiers in front of it.

There are several statues on either side of the front part of the monument of figures, from soldiers to civilians, who labored to assist in alleviating the suffering of the siege and defending the city. Soldiers and civilians helped to put out fires, retrieve un-exploded ordnance from buildings, repair damage, and built the road of life over a frozen body of water to evacuate civilians and transport supplies.

The siege lasted 872 days (Sept. 8, 1941, to Jan. 27, 1944), resulting in an estimated 1.2 million deaths, mostly from starvation and freezing, and some from bombing and illness. Most were buried in mass graves, the largest of which was Piskarevskoye Cemetery, which received around 500,000 bodies. An accurate accounting of deaths is complicated by the fact that many unregistered refugees had fled to Leningrad before the siege to escape the advancing Nazi army.

According to Wikipedia, by the end of the siege: “Only 700,000 people were left alive of a 3.5 million pre-war population. Among them were soldiers, workers, surviving children and women. Of the 700,000 survivors, about 300,000 were soldiers who came from other parts of the country to help in the besieged city.”

We decided to go into the small museum attached to the Monument, which consisted of one large room. As you walk in after paying for your ticket, you see a series of glass cases that each contain artifacts from the siege with explanatory panels in both Russian and English.

My Russian friend Mike and I noted the Soviet propaganda-style language used in the panels. He said that if the museum had been done today, the language would be different. In any event, the basic information was readily understandable, if one ignored the glory-to-the-Soviet style wording.

On one wall was a large movie screen on which was projected a constant loop of two films that ran approximately 10 minutes each. One was footage of the siege in general and how it affected the residents and what the soldiers and civilians did to defend against it.

The second film focused on the massive deaths, including era footage of people pulling wrapped up corpses in make-shift sleds through the snow to the nearest mass pit for burial. In the center of the exhibit was a large square sculptured map of the city with the outline of the area that was surrounded by the Germans lit up in red. 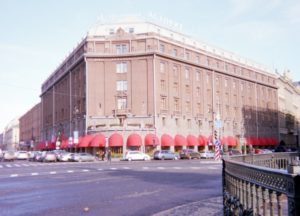 The Astoria Hotel, where Hitler planned to celebrate the taking of Leningrad and had even reportedly sent out the invitations, St. Petersburg. (Photo by Natylie Baldwin)

When we emerged from the darkness of the museum and monument, the sun was bright and it was probably one of the warmest days of the year in St. Petersburg. On the walk back to the car, I told Mike that I didn’t think the average American could even begin to fathom this level of suffering. With the exception of a very small percentage of the population sent to fight our myriad and senseless conflicts, war is something that happens to other people somewhere else. It’s an abstraction – or worse yet, fodder for entertainment.

Mike didn’t respond to my verbal stream-of-consciousness. So we continued on in silence. But it all made me ponder how spoiled Americans have been in this respect, with a vast ocean on either side and weak or friendly neighbors to the north and south.

We have not experienced a war on our soil since the 1860’s and have not suffered an invasion since 1812. I can’t help but think that this, along with our youth, goes a long way toward explaining our lack of perspective and humility as a nation. Only those without wisdom would characterize themselves as “exceptional” and “indispensable.”

Natylie Baldwin is co-author of Ukraine: Zbig’s Grand Chessboard & How the West Was Checkmated, available from Tayen Lane Publishing. She blogs at natyliesbaldwin.com.

37 comments for “The Fallacy of Demonizing Russia”