Hillary Clinton’s explanation for her electoral defeat – putting much of the blame on Russian President Vladimir Putin – clashes with her own chronology of her campaign’s collapse in key Rust Belt states that put Donald Trump into the White House. 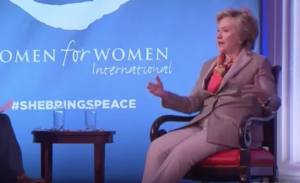 In an interview with CNN’s Christiane Amanpour at the Women for Women International conference on Tuesday, Clinton stated that if the election had been held on Oct. 27, 2016, she would have won, but that her hopes were derailed on Oct. 28.

However, what happened on Oct. 28 wasn’t anything that Putin may or may not have done. It was FBI Director James Comey’s announcement that he was reopening the investigation into possible security violations related to Clinton’s use of a private email server as Secretary of State.

Then, just two days before the Nov. 8 election, Comey again injected the Clinton-server issue into the campaign by announcing that he was once more closing the inquiry.

In other words, Comey delivered what amounted to a double-whammy by reminding voters of a key reason why they distrusted Clinton (the private email server) and then creating the appearance that she was getting special treatment for conduct that might have put a “lesser” person in prison (by absolving her of legal guilt).

However, regarding Clinton’s chronology of her defeat and the supposed role of Russia in exposing Democratic emails, the timing doesn’t fit. WikiLeaks began publishing the purloined emails of Clinton’s campaign chairman John Podesta three weeks before Comey’s Oct. 28 announcement. The first batch was released on Oct. 7 and others were made public over the next couple of months.

Though those emails surely embarrassed the Clinton campaign – because they revealed the contents of Clinton’s paid speeches to Wall Street and some pay-to-play features of the Clinton Foundation – there was no clear correlation between their publication and Clinton’s late drop in the polls.

As Harry Enten reported for FiveThirtyEight, a web site that specializes in electoral predictions, “Clinton’s drop in the polls doesn’t line up perfectly with the surge in Wikileaks interest. When Wikileaks had its highest search day in early October, Clinton’s poll numbers were rising. They continued to go up for another two weeks, even as Wikileaks was releasing emails.”

Indeed, on Oct. 7, The Upshot, The New York Times’ daily tracking of the election’s odds, gave Clinton an 82 percent chance of winning, a prospect that brightened to 92 percent by Oct. 27 before sliding after Comey’s announcement to 85 percent on Election Day.

In other words, Clinton’s chances continued to improve in the three weeks after the WikiLeaks’ publications and only dropped in the wake of Comey’s Oct. 28 announcement of the reopened server investigation.

At a Senate Judiciary Committee hearing on Wednesday, Comey said he disclosed the reopened investigation on Oct. 28 because he had earlier informed Congress that he had closed the inquiry and that saying nothing would have required an “act of concealment.”

Regarding the Podesta emails, there’s also the evidentiary question of whether Russia did, in fact, provide them to WikiLeaks, whose founder Julian Assange has denied getting the material from Russia. One WikiLeaks associate, former British Ambassador Craig Murray, indicated that the Podesta emails and an earlier batch of Democratic National Committee emails came from two different American insiders. 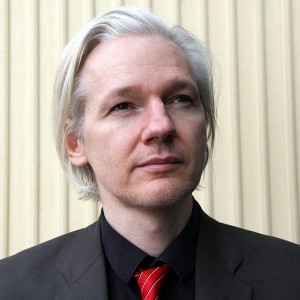 President Obama’s intelligence chiefs, however, asserted with high confidence – but without presenting specific evidence – that Russia was the original source, supposedly having hacked into the email accounts of Podesta and the DNC.

In her comments on Tuesday, Clinton treated the Russian hacking allegations as flat-fact and gave Russia and WikiLeaks top billing in explaining her defeat, even over Comey.

“Every day that goes by we learn more about the unprecedented interference by a foreign power whose leader is not a member of my fan club,” Clinton said in reference to Putin without using his name. “He certainly interfered in our election. And it was clear he interfered to hurt me and to help my opponent.”

But Clinton slid into conspiracy mode by suggesting that Putin, Trump or someone else somehow arranged to have the first batch of Podesta emails released on Oct. 7, 2016, to blunt the impact of that day’s disclosure of Trump’s 2005 hot-mic comments to Access Hollywood host Billy Bush about grabbing women by the “pussy.” (Regarding the timing of that release, NBC explained that a producer recalled the comment and dug the tape out of the archive, before it was leaked to The Washington Post, which published the lewd remark on Oct. 7.)

“Ask yourself this,” Clinton said on Tuesday. “Within an hour or two of the Hollywood Access tape being made public the Russian theft of John Podesta’s emails hit Wikileaks. What a coincidence!”

So, is the former Secretary of State suggesting that there was such direct collusion among Trump, Putin and WikiLeaks that they coordinated the timing of the Oct. 7 release to distract from the release of Trump’s “pussy” comment? U.S. intelligence agencies have cited no proof of collusion between the Trump campaign and Russia regarding the email leaks.

But Clinton went even further, suggesting that Trump was coordinating his public statements with Putin. “If you chart my opponent and his campaign’s statements, they quite coordinated with the goals that that leader who shall remain nameless had,” Clinton said.

Yet, while primarily blaming Putin and Comey for her defeat, Clinton offered no specific examples of her own failings during the campaign. She responded to a question about her supporters’ disappointment and anger  by accepting blame only in general terms.

“I take absolute personal responsibility,” Clinton said. “I am very aware of the challenges, the problems, the shortfalls that we had. … It wasn’t a perfect campaign. There is no such thing. But I was on the way to winning until a combination of Jim Comey’s letter on Oct. 28 and Russian Wikileaks raised doubts in the mind of people who were inclined to vote for me but were scared off.”

While promising more specifics about her mistakes in an upcoming memoir, she avoided any references to problems that other analysts have cited, such as her controversial decision as Secretary of State to use a private email server; her acceptance of six-figure speaking fees from Wall Street and other special interest groups after leaving the State Department; her description of half of Trump’s supporters as “deplorables”; her hawkish foreign policy, including her support for the disastrous Iraq War and her key role in the botched Libyan regime change; her campaign’s lack of an inspirational or coherent message; her heavy reliance on negative advertising against Trump; her association with past scandals involving her husband, Bill Clinton; and her neglect of the traditionally Democratic states of Pennsylvania, Michigan and Wisconsin, which gave Trump the electoral votes he needed to win.

In contrast to President Obama who avoided pinning his political problems on race, Clinton pointed to misogyny as another reason for her defeat and depicted women’s rights as the premier issue facing the world. 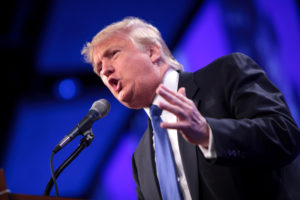 “Women’s rights is the unfinished business of the Twenty-first Century,” Clinton said. “There is no more important larger issue that has to be addressed.”

As important as women’s rights are — and as popular as the line may have been to her audience — Clinton’s statement had a discordant ring since there are many other examples of “unfinished business of the Twenty-first Century,” such as global warming, endless warfare, nuclear weapons, racism, religious bigotry, poverty, lack of health care, etc.

It was also somewhat ironic that Clinton sat before a slogan, #SheBringsPeace, given her militaristic approach toward American foreign policy, including her infamous celebration of Libyan leader Muammar Gaddafi’s grisly murder in 2011, when she declared, “we came, we saw, he died” and clapped with joy.

Despite her off-putting passive-aggressive attitude for much of the half-hour interview, Clinton was at her best toward the end when she began discussing detailed domestic policies and the future challenges to the jobs of Americans from robotics and other high-tech developments.

Only then did the viewers get a sense of Clinton’s greatest strength, her wonky interest in the nitty-gritty of what the government can do for people, a favorable contrast to President Trump’s surprise at how complicated many of the issues are that land on the President’s desk.

But the bulk of the interview focused on blame-shifting her defeat largely onto Russia as she presented herself as a new fighter in the anti-Trump #Resistance. “I’m now back to being an activist citizen and part of the Resistance,” Clinton declared.