As much as Americans like to think of Germany’s Nazism as a foreign evil, Adolf Hitler and his henchmen drew inspiration and guidance from U.S. race laws, as documented in a new book, reviewed by David Swanson.

James Q. Whitman’s new book is called Hitler’s American Model: The United States and the Making of Nazi Race Law. It is understated and over-documented, difficult to argue with. No doubt some will try.

In cartoonish U.S. historical understanding, the United States is, was, and ever shall be a force for good, whereas Nazism arose in a distant, isolated land that lacked any connection to other societies. In a cartoonish reversal of that understanding, which would make a good straw man for critics of this book, U.S. policies have been identical to Nazism, which simply copied them. Obviously this is not the case.

In reality, as we have long known, the U.S. genocide of Native Americans was a source of inspiration in Nazi discussions of expanding to their east, even referring to Ukrainian Jews as “Indians.” Camps for Native Americans helped inspire camps for Jews. Anti-Semites and eugenicists and racists in the U.S. helped inspire those in Germany, and vice versa.

U.S. bankers invested in the Nazis. U.S. weapons dealers armed them. Nazis borrowed from U.S. propaganda techniques developed in World War I. Admirers in the U.S. of Nazi Germany and fascist Italy attempted at least one coup against President Franklin Roosevelt. The U.S. refused to admit significant numbers of Jewish refugees or to help evacuate them from Germany. The State Department turned down Anne Frank’s visa. The coast guard chased a ship of Jews away, sending them back to their fate. Et cetera. We have known all of this.

We have known how the U.S. treated African-Americans, Japanese-Americans and others at the time of World War II, how it experimented on Guatemalans even during the trials of Nazis for human experimentation, and continued to allow human experimentation in the U.S. for many years. And so forth. The good versus evil cartoon was never real.

What Whitman’s book adds to the complex story is an understanding of U.S. influences on the drafting of Nazi race laws. No, there were no U.S. laws in the 1930s establishing mass murder by poison gas in concentration camps. But neither were the Nazis looking for such laws. Nazis lawyers were looking for models of functioning laws on race, laws that effectively defined race in some way despite the obvious scientific difficulties, laws that restricted immigration, citizenship rights, and inter-racial marriage. In the early Twentieth Century, the recognized world leader in such things was the United States.

Whitman quotes from the transcripts of Nazi meetings, internal documents, and published articles and books. There is no doubt of the role that U.S. (state, not just federal) legal models played in the development of the Nuremberg Laws. The 1930s was a time, we should recall, when Jews in Germany and primarily African-Americans in the United States were lynched.

It was also a time when U.S. immigration laws used national origin as a means of discrimination — something Adolf Hitler praised in Mein Kampf. It was a time of de facto second-class citizenship in the United States for blacks, Chinese, Filipinos, Puerto Ricans, Japanese, and others. Thirty U.S. states had systems of laws banning interracial marriage of various sorts — something the Nazis could find nowhere else and studied in comprehensive detail, among other things for the examples of how the races were defined.

The U.S. had also shown how to conquer territories of undesirables, such as in the Philippines or Puerto Rico, and incorporate them into an empire but not give first-class citizenship rights to the residents. Up until 1930, a U.S. woman could lose her citizenship if she married a non-citizen Asian man.

The most radical of the Nazis, not the moderates, in their deliberations were the advocates for the U.S. models. But even they believed some of the U.S. systems simply went too far. The “one-drop” rule for defining a colored person was considered too harsh, for example, as opposed to defining a Jew as someone with three or more Jewish grandparents (how those grandparents were defined as Jewish is another matter; it was the willingness to ignore logic and science in all such laws that was most of the attraction).

The Nazis also defined as Jewish someone with only two Jewish grandparents who met other criteria. In this broadening the definition of a race to things like behavior and appearance, the U.S. laws were also a model.

The Nazis, of course, examined and admired the Jim Crow laws of segregation as well but determined that such a regime would only work against an impoverished oppressed group. German Jews, they reasoned, were too rich and powerful to be segregated. Some of the Nazi lawyers in the 1930s, before Nazi policy had become mass murder, also found the extent of the U.S. segregation laws too extreme. 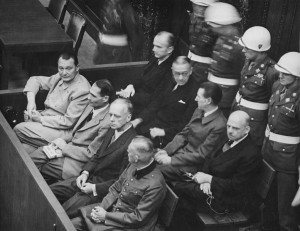 High-ranking Nazis on trial at Nuremberg

But Nazis admired racist statements from contemporary U.S. pundits and authorities back at least to Thomas Jefferson. Some argued that because segregation was de facto established in the U.S. South despite a Constitution mandating equality, this proved that segregation was a powerful, natural, and inevitable force. In other words, U.S. practice allowed Nazis to more easily think of their own desired practices in the early years of their madness as normal.

In 1935, a week after Hitler had proclaimed the Nuremberg Laws, a group of Nazi lawyers sailed to New York to study U.S. law. There, they were protested by Jews but hosted by the New York City Bar Association.

U.S. laws on miscegenation lasted until the 1967 Loving v. Virginia ruling. Vicious and bigoted U.S. policies on immigration and refugees are alive and well today. Whitman examines the U.S. legal tradition, noting much that is to admire in it, but pointing to its political or democratic nature as something that the Nazis found preferable to the inflexibility of an independent judiciary.

To this day, the U.S. elects prosecutors, imposes Nazi-like habitual offender (or three-strikes-you’re-out) sentences, uses the death penalty, employs jailhouse snitches’ testimony in exchange for release, locks up more people than anywhere else on earth, and does so in an extremely racist manner. To this day, racism is alive in U.S. politics. What right-wing dictators admire in Donald Trump’s nation is not all new and not all different from what fascists admired 80 or 90 years ago.

It’s worth repeating the obvious: the United States was not and is not Nazi Germany. And that is a very good thing. But what if a Wall Street coup had succeeded? What if the United States had been bombed flat and faced defeat from abroad while demonizing a domestic scapegoat? Who can really say it couldn’t have or still couldn’t happen here?

Whitman suggests that Germans do not write about foreign influence on Nazism so as not to appear to be shifting blame. For similar reasons many Germans refuse to oppose the slaughter of and mistreatment of Palestinians.

We can fault such positions as going overboard. But why is it that U.S. writers rarely write about U.S. influence on Nazism? Why, for that matter, do we not learn about U.S. crimes in the way that Germans learn about German crimes? It seems to me that it is U.S. culture that has gone the furthest overboard into a sea of denial and self-idolatry.

David Swanson is an author, activist, journalist, and radio host. He is director of WorldBeyondWar.org and campaign coordinator for RootsAction.org. Swanson’s books include War Is A Lie. He blogs at DavidSwanson.org and WarIsACrime.org. He hosts Talk Nation Radio. He is a 2015, 2016, 2017 Nobel Peace Prize Nominee. Follow him on Twitter: @davidcnswanson and FaceBook. [This article originally appeared at http://davidswanson.org/node/5516]

30 comments for “How US Race Laws Inspired Nazism”