President Trump’s platform of “economic nationalism” appears to be crumbling as he seeks to survive his early-term thrashing from the Establishment, but there is a more positive history to his ideas, writes Andrew Spannaus.

With most of the media and political commentators focused on the Republicans’ failed attempt to pass a healthcare bill, some of President Donald Trump’s most significant words appear to have gone almost unnoticed. The President was away from the political fight in Washington on March 20, conducting one of his periodic attempts to sustain excitement among his base. 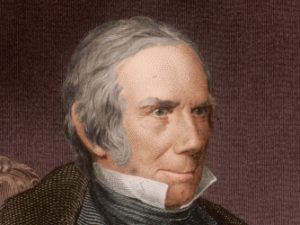 Rep. Henry Clay, a Nineteenth Century promoter of what was called the “American System.”

At a rally in Louisville, Kentucky, Trump repeated his standard lines about putting America first, starting with economic policy. When he got to his push to “Buy American and Hire American”, something new emerged though, a reference to a key figure in US economic history: Henry Clay – who was a member of Congress in the early 19th century.

Trump spoke of the need for a new economic model, and then recalled how protectionism is far from a bad word in US history; rather, it was seen as a means to promote manufacturing and build industry.

Trump said, “Like Henry Clay, we want to put our own people to work. […] “Clay was a fierce advocate for American manufacturing. He said that free trade would throw wide open our ports to foreign production without duties while theirs remained closed to us […] Clay said that trade must be fair, equal and reciprocal.”

Trump then went on to use the term “American System”, associated with the current of economic nationalism promoted by figures such as Alexander Hamilton, Clay and Henry Carey, champions of investment in industry and infrastructure, and protection against the free market claims of European empires, which sought to undermine American economic independence in order to defend their own pre-eminence.

“In explaining his American System, Clay argued that the sole object of the tariff is to tax the produce of foreign industry with a view of promoting American industry,” Trump said. “For too long our government has abandoned the American System.”

The President’s words have been ignored by much of the commentator class, although not surprisingly they were picked up by some websites that wholeheartedly support his agenda, such as Brietbart. Yet the reference to Clay and the American System make it clear that something new is afoot, an attempt to link Trump’s populist rhetoric to some of the most important and effective periods of economic growth in U.S. history. 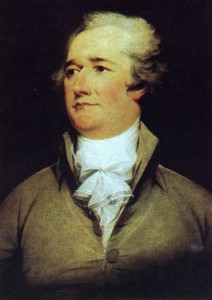 A portrait of Alexander Hamilton by John Trumbull, 1792. Hamilton promoted the growth of an American manufacturing and financial structure that would secure its economic independence from Europe.

In the first half of the 19th century, Henry Clay was the most identifiable promoter of the American System of political economy. His vision was to continue the long-term goal set by the founding fathers Benjamin Franklin, George Washington and Alexander Hamilton: create an independent republic that would break not only its formal ties with the British Empire, but also demonstrate the superiority of a society free from the aristocratic structures present in Europe. The precondition for such a project was the development of a productive economy, which would provide a foundation for lasting independence. This meant the promotion of “internal improvements” – what today we would call infrastructure, manufacturing and strong links between agriculture and industry.

In the early years of the republic, adherence to this vision was certainly not unanimous; there were factions that preferred to live off trade with Europe and strongly opposed decisive actions by the federal government. The mantle of free trade was used then – as it is now – to oppose policies such as tariffs, national banking and other forms of state intervention that granted preference to domestic production as opposed to unrestricted competition.

Henry Clay was one of the great champions of the American System view, a giant in his time who is too often overlooked. A lawyer and state legislator in Kentucky, Clay first came to Washington in 1806 when he was named to fill a temporary vacancy in the Senate. After two brief stints as a replacement Senator, Clay returned to the Capitol in 1811 as a member of the House of Representatives, where he was immediately elected Speaker. Years later Clay would help found the Whig party, in opposition to Andrew Jackson and his so-called “populist” vision opposing big government. One of the great ironies of today’s political upheaval is that those who identify as populists now call for a return to protectionism, a view quite different from the States’ Rights concept promoted in the past, and also by much of the modern Republican Party.

Already from the time he was a replacement Senator, Clay began promoting his vision for the nation. In 1807, in line with the efforts of John Quincy Adams, he worked to obtain passage of a resolution binding the Secretary of the Treasury to prepare a plan for the construction of a national network of canals and roads, subsequently drawn up by Secretary Albert Gallatin.

It was not immediately implemented due to opposition from President Thomas Jefferson, among others, but this approach to internal improvements, accompanied by measures such as the founding of the Second Bank of the United States, and tariffs to protect manufacturing, formed the basis for the American System policy that would last for decades, making the Kentucky statesmen one of the idols of Abraham Lincoln.

It is important to note that the goal of protectionist policies was not to block international trade. Rather, trade conducted on the terms dictated by the British (and the French) was seen as stifling the growth of the United States, and perpetuating the pre-revolutionary condition of colonies whose main vocation was the export of raw materials.

In the first 20 years after the birth of the new nation there had been an initial period of strong growth. However, the benefits were felt principally by the states of New England and a few others that profited from the carry trade of products from the Indies that were then re-exported to Europe.[See Douglass C. North, The Economic Growth of the United States, W.W. Norton & Company Inc., New York, 1966, p. 53.]

Many in the merchant class were content to continue in this mold, despite the restrictions on trade and vexations imposed by Great Britain, but the nationalists bristled at the limits on the growth of domestic industry, seen as thwarting the national mission set by the American Revolution. The result was that Clay and his allies in Congress, known as the “War Hawks”, agitated in favor of again going to war with Great Britain, with the goal of finally obtaining full independence, allowing not only for unrestricted commerce, but also for the expansion of industry and domestic trade towards the Western areas of the country. Clay has been called “the man whose influence and power more than that of any other produced the war of 1812 between the United States and Great Britain.”[Quote from Josiah Quincy in: Quentin Scott King, Henry Clay and the War of 1812, Jefferson, North Carolina, McFarland & Company, Inc., Publishers, 2014, p. 148.]

The American System as defined by Clay has represented a crucial reference point for various periods of economic growth in U.S. history. The approach can be defined as economic nationalism, but it is essential to understand that the enemy of this view is not the expansion of international trade or economic initiative, but rather the attempt by colonial interests to prevent the development of industry and thus the growth of a strong, educated working class able to sustain an independent democratic republic.

Indeed American System economists such as Henry Carey, whose ideas would form the basis for the birth of the Republican Party in the 1850s, demonstrated that protection for American industry actually benefited trade, as “every man is a consumer to the whole extent of his production.”

Modern economic theory does not look kindly on the notion that a nation should promote its own industries at the expense of the efficiency of international markets. The events of recent decades have shown, however, that the basic concepts that emerged in the 1800s still apply today: the search for low costs leads to a race to the bottom, and weakens the economic and social fabric of countries that aim to grow the middle class.

As the Trump administration seeks to develop a coherent policy on global trade and the promotion of American manufacturing, looking to the current of Hamilton, Clay, Carey and Lincoln could, in the best case scenario, lead to an important shift in modern politics; at the least, it should allow for a deeper discussion of what protectionism actually means in U.S. history, beyond the caricature that has dominated the public discussion to date.

The President is clearly picking and choosing his references, not without some confusion; indeed he speaks glowingly of Andrew Jackson, whose economic approach was diametrically opposed to that of Clay and other representatives of the economic nationalist current.

Nevertheless, a serious discussion on how to implement a modern version of the American System’s emphasis on investment and fair trade, would bring an important new element to the debate over how to address the failures of globalization in the past 25 years.

Andrew Spannaus is a freelance journalist and strategic analyst based in Milan, Italy. He is the founder of Transatlantico.info, that provides news, analysis and consulting to Italian institutions and businesses. His book on the U.S. elections Perchè vince Trump (Why Trump is Winning) was published in June 2016. [This article originally appeared as Aspenia online at http://www.aspeninstitute.it/aspenia-online/article/donald-trump-henry-clay-and-american-system]