Donald Trump’s unilateral decision to attack Syria under a preposterous claim of protecting a “vital national security interest” of the U.S. was another case of a President violating the U.S. Constitution, as Daniel C. Maguire explains.

I am old enough to remember the last time the United States declared war in accord with Article 1, Section 8 of the U.S. Constitution. The date was Dec. 8, 1941, and I was ten-years-old. I remember hearing on the radio all the Yay votes and I was jarred to hear one female vote saying Nay. That was Rep. Jeannette Rankin of Montana.

War, by definition, is state sponsored violence. It kills people and animals and savages the natural environment. It is “development” in full reverse, a dreadfully serious undertaking, a power that kings once wielded arbitrarily on their own impulse and authority. But the Founders would have none of that.

So, the U.S. Constitution gave the war power to the Congress, “the immediate representatives of the people.” Congress also received the crucial power of the purse to continue or discontinue war after it starts.

James Madison, the Constitution’s principal architect, wrote: “In no part of the Constitution is more wisdom to be found than in the clause which confides the question of war and peace to the legislature and not to the executive department.”

Yet, in recent decades, the United States has repeatedly trashed that wisdom and done so as recently as April 6, 2017, as President Trump displayed his bully virility and his need to use kill-power to bolster his sagging ratings.

As military analyst Robert Previdi writes: “We have distorted the Constitution by allowing all Presidents since Harry S. Truman to use military power on their own authority. … For more than 160 years, from Washington to Roosevelt, no President claimed that he had the power to move the country from peace to war without first getting authority to do so from Congress.”

But a servile Congress has whittled away its signal prerogative to make war. In the Tonkin Gulf Resolution in 1964, Congress gave President Lyndon Johnson a blank check signed by a responsibility-shedding Congress.

In 1973, with the War Powers Resolution, it allowed the President to commit troops anywhere in the world for up to 60 days without congressional involvement. By that time in modern warfare, the die would be cast with Congress left holding the President’s coat as he uses the power abandoned by congressional defection.

The Iraq Resolution in October of 2002 transferred war-making authority to President George W. Bush for him to use or not use at his whim and discretion. And so it came to pass that another George in American history was given kingly power with predictably disastrous results, much as the arrogance of King George III precipitated Great Britain’s break with its American colonies.

Barack Obama, after winning the Nobel Peace prize, went on to make war in places such as Somalia, Yemen, Syria, Libya, Iraq Afghanistan, and Pakistan without a congressional declaration of war. The sort of abuse of executive power has become “second nature” to us now.

But at least Obama asked Congress to authorize war on Syria, a move that contributed to the decision to avoid a full-scale U.S. military intervention in another Mideast war. There were other moments of sanity when constitutional restraint peeked through. On April 5, 1954, when President Eisenhower was under pressure to do an air strike in Indochina, he replied to Secretary of State John Foster Dulles: “Such a move is impossible” and would be “completely unconstitutional and indefensible.” (Remember when Republicans could say such things!)

The term “Commander-in-Chief” is perverted to justify Congressional surrender of its constitutional war-declaring power to the royal president. The term runs like a greased pig through political discourse these days. 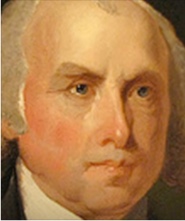 President James Madison, an architect of the U.S. Constitution and the Bill of Rights.

As Robert Previdi notes: “The President’s power as Commander-in-Chief in time of war takes over only after authority to deploy our forces has been received from Congress.” The key word there is after.

And here is another irony in this story of serially rampaging bombs-away presidents. Richard Falk writes that World War II ended with an historic understanding that recourse to war by individual nations could no longer be treated as “a matter of national discretion.”

The legal framework embodied in the United Nations Charter, largely shaped by American jurists, was “to entrust the Security Council with administering a prohibition of recourse to international force (Article 2, Section 4) by states except in circumstances of self-defense, which itself was restricted to response to a prior ‘armed attack’ (Article 51) and only then until the Security Council had the chance to review the claim.”

This is known in the literature as “the policing paradigm.” It means that state-sponsored violence can only be justified in a community context with legal and internationally enforceable restrictions comparable to the restraints we put upon our police. This civilizing understanding lies amid the smoking rubble of a world of endless war.

A president can become the despotic shepherd only when the people become his sheep. In recent decades, the vox populi has only bleated when it should have been screaming. Teddy Roosevelt said: “To announce that there must be no criticism of the President, or that we are to stand by the President, right or wrong, is not only unpatriotic and servile, but is morally treasonable to the American People.”

Yes, members of Congress, with a few noble exceptions, are groveling wimps and aliens to the lost art of diplomacy, but it’s also true that an ill-informed, lazy and indolent citizenry is neck high in treasonous negligence. In the end, the buck stops with us.

Daniel C. Maguire is a Professor of Moral Theology at Marquette University, a Catholic, Jesuit institution in Milwaukee, Wisconsin. He is author of A Moral Creed for All Christians and The Horrors We Bless: Rethinking the Just-War Legacy [Fortress Press]). He can be reached at daniel.maguire@marquette.edu .

39 comments for “Trampling the US Constitution for War”