Anti-Jewish vandals have defaced cemeteries and other Jewish targets, raising the question of whether anti-Semitism is on the rise in the Age of Trump, writes ex-CIA analyst Paul R. Pillar.

There is an upsurge in anti-Jewish hatred in America. It has manifested itself in criminal and violent acts and threats of still more violence. Jewish cemeteries have been vandalized, and Jewish educational and cultural institutions have received death threats.

The obvious increase in such incidents leaves no doubt about the existence of intense anti-Semitism, and about how it persists in the United States and not just elsewhere. This hatred and prejudice should be vigorously condemned. All Americans should realize that while Jewish citizens are those most directly vulnerable to harm, such hatred and prejudice offends American values that benefit everyone.

We must ask about the hatred: why? Not just why in general, but why now. The correlation that immediately comes to mind regarding the rise of this vile phenomenon is with the political rise of Donald Trump, through the time of his candidacy and campaign and now the opening weeks of his presidency. We must be careful with any correlation not to be hasty in attributing cause and effect.

In this case, we should be aware of two ways of looking at Trump regarding this entire issue. On one hand is his strategy of appealing to the prejudices of a white nationalism in which anti-Semitism is not far below the surface, and sometimes visible on the surface. Trump relies on, as his most influential adviser, Stephen Bannon, whose Breitbart News has provided a forum for anti-Semitic sentiment.

Another senior appointee in the Trump White House proudly wears a medal associated with the wartime Hungarian regime that collaborated with the Nazis. Trump himself has come close to denying that the cemetery attacks were a manifestation of anti-Semitism by suggesting that they were false flag operations.

On the other hand is the Donald Trump who talks about his Jewish son-in-law, his daughter who converted to Judaism, and the Jewish grandchildren they have given him. This Donald Trump also gets the endorsement of Israeli Prime Minister Benjamin Netanyahu, who said when visiting the White House last month, “There is no greater supporter of the Jewish people and the Jewish state than President Donald Trump.”

One always needs to approach the subject of anti-Semitism gingerly. Let us approach it by disaggregating the two subjects the Prime Minister mentioned — a people and a state — and note how different folks have responded differently to the dichotomous Donald Trump described above. Some are sufficiently and appropriately offended by the anti-Semitic connections to condemn them, regardless of whatever else they may like about Trump and his policies.

The Anti-Defamation League, for example, has, to its credit, spoken out forcefully against the Bannon appointment. Some others, however, including some groups that might be expected to be especially disturbed by any indications of anti-Semitism, have given Trump a pass on the issue because they give overriding priority to Trump’s support of the Israeli government and its policies. They only seem to care about Trump being less on that government’s case about the occupation of Palestinian territories and the continuing Israeli colonization of the territories than the Obama administration was, and about how Trump has appointed a far-right ambassador to Israel who is in bed with the settlement movement and how Trump makes other supportive noises such as talk about moving the U.S. embassy to Jerusalem.

Netanyahu himself, during his recent visit, gave Trump a pass by not speaking out about the upsurge in anti-Semitism in the United States even after Trump, in his joint press conference with the prime minister, indecorously swatted aside a straightforward question from an Israeli journalist about the rash of incidents. 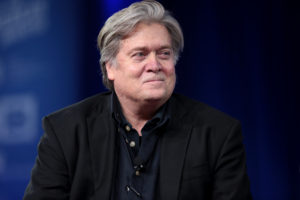 Still others recognize the dichotomy explicitly and express conflicted feelings. Samuel G. Freedman writes of an “anguishing reality” for “the vast majority of American Jews”: “To support Israel when it is cross-branded with Trump’s intolerance is to avert their eyes from a threat right here at home.”

Similar anguished dissonance about Trump coming to power is expressed by many observers in Israel. The conflicted feelings arise because a couple of false equations are being made by those having the feelings. One is to equate the well-being of Jewish people with the standing of a particular state. Even some movements within Judaism don’t agree with that, and the two subjects involved are in fact two different things.

Even more damaging and disorientating is to equate either the well-being of Jewish people, or the standing and strength of Israel, with the policies of the government that is currently in power in Israel and that is a coalition of right-wing parties that have dominated Israeli politics in recent years. There is no more validity to that equation than there would be in equating criticism of Trump and his policies with being anti-American, or being prejudiced against white Protestants or any other ethnic or religious identity associated with America. Although Netanyahu spoke of support for the “Jewish state,” he really meant support for “my government.”

What most obviously and saliently identifies that government, as distinct from other strands in Israeli politics, is what most identifies it in the eyes of the international community and accounts for nearly all the tensions with that community. This is the policy of holding on to territory conquered in war a half century ago that was long inhabited by another people, a people who have since been in a subjugated state and denied self-determination. The combination of colonization of the conquered territory through construction of settlements, and repression of Palestinian life through demolitions of homes and countless other measures, yields a combination of apartheid and ethnic cleansing. It is, in short, a major program of forceful discrimination against an entire people identified by their ethnic or religious identity.

Many of the official policies and practices in the territories exhibit an attitude toward the subjugated community that is one of disdain for people of that ethnicity and treatment of their lives as having much less value than those of the dominant ethnicity.

Unofficial actions, including violent actions, by members of the dominant ethnicity against the subjugated community embrace similar attitudes. The official policies and the vigilante activity both play upon and stoke broader attitudes of Jews toward Arabs that feature not just bias and disdain but hatred. Visceral hatred of Arabs has visibly risen among Jewish Israelis in recent times, coincident with the political rise of the right-wingers who now control the government.

Here is where we cannot only see that there is not really a tension in how to regard Donald Trump but also understand the basis of anti-Semitism in the United States and its recent surge. Any form of hateful prejudice says much more about the bigot than about the target of the prejudice. Through the centuries, Jews have disproportionately suffered as targets of hateful prejudice for reasons that can be analyzed in terms of such historical factors as demographic patterns, envy of success, and why certain stereotypes and scapegoats have been popular at certain times.

But the drivers of this specific manifestation of prejudicial hatred are essentially the same as those that have driven other forms of it. In the United States, anti-Semitism is tapping some of the same roots of fear, resentment, and ignorance that also have underlain waves of prejudice against Irish-, Chinese-, Japanese-, and African-Americans.

The contemporary Trumpian version highlights Muslims and Mexicans, but that’s not because they both start with M or for any other reason that sets them apart from other groups that can be, or have been, targets of prejudice and hatred. They happen to be convenient targets because of perceived connections to certain other salient issues of the day, but the underlying attitudes can be directed just as easily at Jews or other targets defined in terms of religion or ethnicity.

The number of active hate groups in the United States has risen markedly since the beginning of the Twenty-first Century. The numbers dropped for a while during Barack Obama’s second term, but in the last two years the numbers have increased significantly again. Anti-Jewish incidents are part of an overall rise in prejudicial hatred. Anti-Jew has gone hand-in-hand with anti-black, anti-Muslim, and anti-whomever.

The coincidence of timing between this trend and the political phenomenon of Donald Trump is not merely coincidence. The political themes that Trump has ridden to the White House play directly upon, and stoke further, the sorts of prejudices that can take violent forms and that may be manifested in overturned gravestones in a cemetery.

This pattern parallels the pattern in Israel. The details about the target groups are different, or course, and for obvious reasons, Jews are not the prime target of those who support the people with political power (although it is easy to find anti-Jewish hatred among Palestinians). But the basic dynamics involving ignorance, fear, rhetoric, political power, and hateful prejudice are essentially the same.

We should have gotten a clue about this from the vocabulary used. Although the term anti-Semitism long ago became equated with anti-Jewish prejudice, Arabs are Semites, too. It is highly likely that those responsible for desecrating cemeteries and sending threatening message to Jewish institutions would not be nice to Arabs, either.

So there should be no conflicting feelings in thinking about Donald Trump in connection with these issues. His bromance with Netanyahu is one founded on a common approach to fear and prejudicial policies. The parallels between their policies, along with the foundations of fear and prejudice, extend even to wall-building. The shared political strategy of the two governments promotes the sort of bias and hatred that is bad for Jews, bad for Israel, and bad for the values of tolerance and fairness that the vast majority of American Jews embrace.

The false equations may have contributed to this problem from another angle. The alacrity with which some defenders of the rightist government of Israel whip out the anti-Semitism card as a response to criticism of that government’s policies not only represents a grossly inaccurate characterization of much criticism that has nothing to do with anti-Semitism and is offered in the best interests of Israel.

It also complicates efforts to counter real anti-Semitism. For one thing, it means taking our eyes off the ball that is the real thing while holding debates about the false version. For another, it cheapens the currency. If observers in the United States perceive that anti-Semitism is something that involves policy wonks arguing over what is going on in the West Bank, most observers are not apt to conclude that it is something worth spending their time and attention worrying about.

They should worry about it. It has been said, with good reason, that Jews are the canary in the coal mine as far as prejudice and sometimes lethal hatred are concerned, because they often have been the first to suffer from it. But if the cause of the suffering remains, others will suffer as well.

← Greens’ Stein Faults Two-Party System
The Kagans Are Back; Wars to Follow →

59 comments for “Reasons for Rise in Anti-Semitism”