Civil rights attorney Lynne Stewart, who died March 7 from cancer, saw her condition worsen while she was in prison as a result of her legal representation of Sheikh Omar Abdel-Rahman, an Egyptian cleric who was convicted of planning terror attacks. The U.S. government then won a conviction against Stewart for passing on messages to the Sheikh’s friends and supporters. 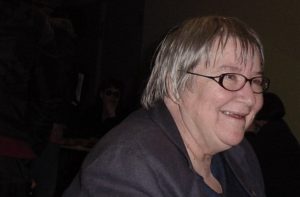 Journalist Chris Hedges wrote about Stewart in 2014 after Stewart was released having  served four years of a ten-year sentence. Suffering from terminal cancer, she received a compassionate release after thousands protested and signed petitions against her continued incarceration.

Hedges wrote: “The lynching and disbarring of civil rights lawyer Lynne Stewart, who because she has terminal cancer was recently released from prison after serving four years of a 10-year sentence, is a window into the collapse of the American legal system. Stewart—who has stood up to state power for more than three decades in order to give a voice to those whom authorities seek to crush, who has spent her life defending the poor and the marginalized, who wept in court when one of her clients was barred from presenting a credible defense—is everything a lawyer should be in an open society. But we no longer live in an open society. The persecution of Stewart is the persecution of us all.”

Stewart upheld the tradition of the people’s lawyer as embodied in the work of Clarence Darrow and William Kunstler. Like them, she deeply believed that all people deserved a vigorous defense.

I interviewed Stewart for the Flashpoints show on Pacifica Radio, along with her husband, Ralph Poynter, in 2014, right after her release from Maximum Security prison in New York.

Dennis Bernstein: Why do you think they put you in jail? Is it because for a zillion years you represented the poorest of the poor, the people who really had the right to be represented, but not the money?

Lynne Stewart: Well, I think it’s a combination really of wanting to send a warning shot, as we say, to ice the zeal of lawyers who represent such people. I mean, the fact of the matter is that I was the stalking horse, and they wanted to let lawyers know they could represent controversial people but they had to do so within the bounds set by the government: “Do it our way.” Don’t do it the way, you and the client, I mean which is traditional thing. You sit with the client, you decide on a strategy and you do it. But, no, they wanted to make it, “You have to do it within the parameters we suggest.” And that, of course, is a terrible incursion on the attorney/client privilege, and the relationship.

DB: How thoroughly were you and your clients bugged?

LS: Well, we didn’t know it, at the time. But, it was visits, in a prison setting, and they recorded everything. They had audio and visual. And it was very funny because they couldn’t put it like where we would be seeing a camera or anything, so they mounted it above our heads. So you see these hands moving across a table. The Sheikh’s hands, my hands, my interpreter’s… really showing nothing. But they liked that, they liked that, just everything they could get.

DB: And where are we? Here we are, 2014, where we’re seeing endless revelations about the level of national security activities that undermine all the core aspects of free speech. How would you evaluate where we are now, in that world of first amendment free speech? Do we have any left? 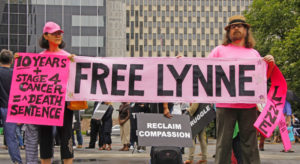 LS: Well, I tell you, it was interesting. You know, of course, we raised that as an issue for the case, when I was indicted. That their intrusion in 6th amendment sacred precincts should preclude them from being able to prosecute. However, by that time, the Patriot Act had been passed, in the interim between the time they did it, and the time that we raised this. And it was more or less to say, well, under the Patriot Act they could do it, so what’s the problem?

Even though it was not done under the Patriot Act. But it’s the halo effect of the Patriot Act that allowed them to do it. And I think that that covers a lot of situations nowadays. Now they want to be able to take someone’s cell phone, which is really a mini-computer. And if you’re arrested they can get any information off there, including medical information, including any information that’s private and confidential. So the fact of the matter is, I think we all have to say ourselves […] “What would I say, freewheeling. They’re out there, they can get anything they want, whenever they want it.” And we act accordingly.

DB: Lynne Stewart in the studio, she’s free, she’s with us. What’s the advice [for lawyers]? Should they take on these tough clients? Should they be afraid?

LS: Well, […] I was being interviewed today by an AP reporter from New York, who was doing a thing on how people who represent difficult clients are punished personally and professionally. And so we were talking about this very point and he said, “Do you see anybody coming along that’s going to take your place, that could do what you did?” And I said, “There are some folks, I count my own son as one of them, although he does it in a very low key way without publicity, etc.”

But, I said to Larry Undermeister, I said, “Listen, I got, I would say, upwards of 100 letters when I was in prison, and they were from young lawyers, either in law school or about to enter law school, or just starting on their careers.” And they said, “I became a lawyer because I want to be a lawyer like you are.” And […] they say, “What’s your advice?” and I said, “If you have that fire in your belly, do it, do it.”

Although I recognize that they enter the arena in a very different way… when I entered, I had no debt. I could hang out my shingle and say, “Okay, let’s see who comes in the door.” They can’t do that. They’ve got these enormous student loans that they’ve got to pay off. They’ve got to get something that gives them a salary, that enables them… and, of course, by the time you pay off the student loans the fire has sometimes become embers.

DB: So, there’s a real temptation to start lying for some bank or major corporation to pay off your debt.

But the real people to do it for, where it’s you and the government and everybody in the courtroom hates you (which was many times the case, for me), those are the cases you really want to do, as a lawyer. You need to do. And I still, I still have a pang. I’ll read about something in the newspaper and I’ll say, “Gee, I would have loved to have done that case” or “I would like to do this case.” […]

DB: Have you been asked to give counsel in certain cases?

LS: I’m not allowed. I’m disbarred, and you’re not even allowed to… you can’t work in a law office alphabetizing. You can’t go anywhere near a law office. Because I think that they understand that lawyers, being the wily people we are, if you’re in a law office, you’re going to do a little bit more than alphabetize the files. But the answer is, I can’t help but be interested or make comments, or get mad at the T.V. set when they do these outrageous programs…

DB: Well, you can alphabetize my legal files any time. Also in the studio, and we thank Jeff Mackler for bringing you to the Bay Area, and not only that, we thank Jeff Mackler for being unrelenting in this fight to free you. I mean, and I’m serious, knock-the-door-down unrelenting in this fight. And I have to be honest, I was sort of hopeless, I didn’t think he was going to be able to do it. I didn’t think the folks who rose up around the country could do it. But they did, and you’re here. Jeff how does it feel to see Lynne here?

Jeff Mackler: Magnificent. Of course, I visited her in prison, and she was upbeat that we could win. But since I have the opportunity, I want to make some criticisms of Lynne. First, when she was on the witness stand and they said to her in court, and I attended the entire proceedings, they said, “Lynne, if you had to do it all over again” said her attorney, Mike Tigar, “would you do the same thing?” That is, pass out a press release on behalf of your client, for which she was convicted of conspiracy to aid and abet terrorism. And I watched Lynne closely and I could see a tear come out of her eye. And she said, “I would hope I would think…no, I would do it again. I have a duty to my client.” That’s one criticism. Lynne, you should have lied.

And second, they said, “Well, why did you do it? I mean, why didn’t you just appeal this special administrative order that prevented you from passing a press release?” And she said, “Well, let me give you a story. A friend of mine, named Mumia Abu Jamal,” this is a quote, “a convicted murderer,” and she was using him as a reference in front of a jury, where her life is at stake, “complained that they were opening his mail, and he filed a lawsuit and it took years. Well, I have a duty to my client. I’m not going to let him stand there in prison for years, so I just did the right thing for my client.” Well, that’s Lynne Stewart and that’s why she’s here and she’s free with her dignity.