Exclusive: U.N. investigators increasingly make their conclusions fall in line with Western propaganda, especially on the war in Syria, as occurred in a distorted report about last year’s attack on an aid convoy, explains Gareth Porter.

The March 1 report by the United Nations’ “Independent International Commission of Inquiry“ asserted that the bloody attack on a humanitarian aid convoy west of Aleppo City on Sept. 19, 2016, was an airstrike by Syrian government planes. But an analysis of the U.N. panel’s report shows that it was based on an account of the attack from the pro-rebel Syrian “White Helmets” civil defense organization that was full of internal contradictions. 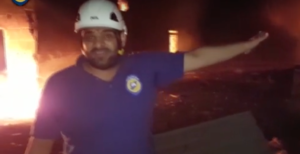 A White Helmets member pointing to the aftermath of a military attack.

The U.N. account also was not supported by either the photographic evidence that the White Helmets provided or by satellite imagery that was available to the commission, according to independent experts. Further undermining the U.N. report’s credibility, the White Helmets now acknowledge that rockets they photographed were not fired from Russian or Syrian planes but from the ground.

Like last December’s summary of the U.N.’s Headquarters Board of Inquiry report on the same incident, the Commission’s report described the attack as having begun with “barrel bombs” dropped by Syrian helicopters, followed by further bombing by fixed-wing planes and, finally, strafing by machine guns from the air.

The March 1 report did not identify any specific source for its narrative, citing only “[c]ommunications from governments and non-government organizations.” But in fact the U.N. investigators accepted the version of events provided by the White Helmets chief in Aleppo province as well as specific evidence that the White Helmets had made public.

The White Helmets, which are heavily funded by Western governments and operate only in rebel-controlled areas, are famous for using social media to upload videos purporting to show injured children and other civilian victims of the war.

Last year, a well-organized campaign pushed the group’s nomination for a Nobel Peace Prize and a Netflix film about the group won an Oscar last month. The United Nations and the mainstream Western news media have frequently relied on White Helmets accounts from war zones that are not accessible to outsiders. But the White Helmets’ officials have pursued an obvious political agenda in support of opposition forces in Al Qaeda-dominated zones in Aleppo and Idlib where they have operated.

On Sept. 19, immediately after the attack on the aid convoy, the chief of the White Helmets organization in the Aleppo governorate, Ammar al-Selmo, presented a dramatic narrative of a Russian-Syrian air attack, but it was marked by obvious internal contradictions.

At first, Selmo claimed in an interview that he had been more than a kilometer away from the warehouses where the attack occurred and had seen Syrian helicopters dropping “barrel bombs” on the site. But his eyewitness account would have been impossible because it was already dark by the time he said the attack began at about 7:15 p.m. He changed his story in a later interview, claiming that he had been right across the street at the moment of the attack and had heard the “barrel bombs” being dropped rather than seeing them.

Selmo insisted in a video filmed that night that the attack began with Syrian helicopters dropping eight “barrel bombs,” which are described as large, crudely constructed bombs weighing from 250 kg to 500 kg or even more. Citing a box-shaped indentation in the rubble, Selmo said the video is showing “the box of the barrel bomb,” but the indentation is far too small to be a crater from such a bomb.

Selmo continued the account, “Then the regime also target this place with cluster bombs two times, and also the aircraft of the Russians target this place with C-5 and with bullets,” apparently referring to Soviet-era S-5 rockets. The White Helmets photographed two such rockets and sent it to media outlets, including the Washington Post, which published the picture in the Post story with credit to the White Helmets.

But Hussein Badawi, apparently the White Helmet official in charge of the Urum al Kubrah area, contradicted Selmo’s story. In a separate interview, Badawi said the attack had begun not with “barrel bombs” but with “four consecutive rockets” that he said had been launched by government forces from their defense plant in Aleppo province – meaning that it was a ground-launched attack rather than an air attack.

In an email response to a query from me, Selmo retracted his own original claim about the S-5 rockets. “[B]efore aircraft’s attack on the area,” he wrote, “many land to land missiles attacked the place coming from the defense factories which [are] located in eastern Aleppo [east of] the city, regime controlled area. [T]hen aircraft came and attacked the place.”

But such a rocket attack from that “regime controlled area” would not have been technically possible. The Syrian government defense plant is located in Safira, 25 kilometers southeast of Aleppo City and even farther from Urum al-Kubrah, whereas the S-5 rockets that the White Helmets photographed have a range of only three or four kilometers.

Moreover, the Russians and Syrian government forces were not the only warring parties to have S-5s in their arsenal. According to a study of the S-5 rocket by Armament Research Services consultancy, Syrian armed opposition forces had been using S-5 rockets as well. They had gotten them from the CIA’s covert program of moving weapons from Libyan government stockpiles to be distributed to Syrian rebels beginning in late 2011 or early 2012. Syrian rebels had used improvised launch systems to fire them, as the ARS study documented with a picture.

Significantly, too, the explicit claim by Selmo that Russian planes were involved in the attack, which was immediately echoed by the Pentagon, was summarily dismissed by the U.N. panel report, which stated flatly, without further explanation, that “no Russian strike aircraft were nearby during the attack.”

Yet, despite the multiple discrepancies in the White Helmets’ story, the U.N. investigators said they corroborated the account of the air attack “by a site assessment, including analysis of remnants of aerial bombs and rockets documented at the site, as well as satellite imagery showing impact consistent with the use of air-delivered munitions.”

The U.N. Commission’s report cited a photograph of the crumpled tailfin of a Russian OFAB-250 bomb found under some boxes in a warehouse as evidence that it had been used in the attack. The White Helmets took the photograph and circulated it to the news media, including to the Washington Post and to the Bellingcat website, which specializes in countering Russia’s claims about its operations in Syria.

But that bomb could not have exploded in that spot because it would have made a crater many times larger than the small indentation in the floor in the White Helmet photo – as shown in this video of a man standing in the crater of a similar bomb in Palmyra.

Something other than an OFAB-250 bomb – such as an S-5 rocket — had caused the fine shrapnel tears in the boxes shown in the photo, as a detail from the larger scene reveals. So the OFAB bomb tailfin must have been placed at the scene after the attack.

Both U.N. imagery analysts and independent experts who examined the satellite images found that the impact craters could not have come from the “aerial bombs” cited by the Commission.

The analysis of the satellite images by United Nations specialists at UNITAR-UNOSAT made public by the U.N. Office of Humanitarian Coordination on March 1 further contradicts the White Helmet account, reflecting the absence of any evidence of either “barrel bombs” or OFAB-250 bombs dropped on the site.

The U.N. analysts identified four spots in the images on pages five and six of their report as “possible impact craters.” But a U.N. source familiar with their analysis of the images told me that it had ruled out the possibility that those impact points could have been caused by either “barrel bombs” or Russian OFAB-250 bombs.

The reason, the U.N. source said, was that such bombs would have left much larger craters than those found in the images. Those possible impact points could have been either from much smaller air-launched munitions or from ground-based artillery or mortar fire, but not from either of those weapons, according to the U.N. source.

A former U.S. intelligence official with long experience in analysis of aerial photos and Pierre Sprey, a former Pentagon analyst, both of whom reviewed the satellite images, agreed that the spots identified by UNOSAT could not have been from either “barrel bombs” or OFAB-250 bombs.

The former intelligence official, who demanded anonymity because he still deals with government officials, said the small impact points identified by the U.N. team reminded him of impacts from “a multiple rocket launcher or possibly a mortar.”

Sprey agreed that all of those impact points could have been from artillery or mortar fire but also noted that photographs of the trucks and other damaged vehicles show no evidence that they were hit by an airstrike. The photos show only extensive fire damage and, in the case of one car, holes of irregular size and shape, he said, suggesting flying debris rather than bomb shrapnel.

Sprey further pointed to photographic evidence indicating that an explosion that the U.N. Commission blamed on a Syrian airstrike came from within the building itself, not from an external blast. The building across the street from some of the trucks destroyed by an explosion (in Figure 9 of a series of photos on the Bellngcat website) clearly shows that the front wall of the building was blown outward toward the road, whereas the rear wall and the roof were still intact.

The photograph (in Figure 10) taken from inside the remains of that same building shows the debris from the blast was blown all the way across the street to the damaged truck. Sprey said those pictures strongly suggest that an IED (improvised explosive device) had been set in the house to explode toward the trucks.

In embracing the Syrian-air-strike narrative — although it falls apart on closer examination — the U.N. “Commission of Inquiry” thus fell into line with the dominant Western political bias in favor of the armed opposition to the Syrian government, a prejudice that has been applied to the Syrian conflict by U.N. organs since the beginning of the war in 2011.

But never has the evidence so clearly contradicted that line as it has in this case – even though you will not learn that by reading or watching the West’s commercial news media.

39 comments for “A Flawed UN Investigation on Syria”