Exclusive: President Trump’s complaint that Official Washington is trying to block his policies, including détente with Russia, is underscored by the praise heaped on a departing State Department official, writes James W Carden.

It’s probably safe to wager that few people outside of Washington, and perhaps even quite a few people inside it, have ever heard of Ambassador Daniel Fried — at least not until very recently. 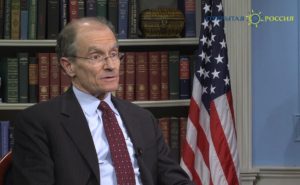 The longtime Ambassador, a 40-year veteran of the U.S. State Department, recently made headlines in Time, Newsweek, Reuters, Politico and NPR for a farewell speech he made to his State Department colleagues during which he took a parting shot at President Trump for the latter’s widely assumed (but yet to be acted upon) desire to come to an accommodation with Russia.

Fried’s address won praise from Establishment figures like former Deputy Secretary of State Antony Blinken (a “powerful defense of liberal international order”), Atlantic Council executive Damon Wilson ( a “clarion call for the U.S. to believe in itself and lead [a] liberal order”) and New York Times columnist Roger Cohen (“a superb summation of everything worth fighting for to keep this planet fit for human habitation”).

Why all the excitement? Well for one, Frieds’s farewell hit the many of Establishment’s erogenous zones:

–NATO expansion as an unalloyed good: NATO and the E.U. – grew to embrace 100 million liberated Europeans… this great achievement is now under assault by Russia

–Realists just don’t “get it”: George Kennan didn’t think much of what he termed America’s moralistic-legalistic tradition. But this foreign policy exceptionalism was the heart of our Grand Strategy through two World Wars, the Cold War and the post-1989 era, and it was crowned with success.

–And then there is Fried’s tendentious (and among neoconservatives and liberal interventionists widely shared) rendering of history and his puzzling conflation of the world situations as they obtained in 1940 and as it obtains currently, in 2017: In 1940, Germany offered Britain a sphere of influence deal: German recognition of the British Empire in exchange for London’s recognition of Germany dominance of continental Europe. Churchill didn’t take the deal then; we should not take similar deals now.

While there can be little doubt that Fried served loyally, with distinction and was in all likelihood an exemplary functionary of the U.S. foreign policy apparatus, what else explains the outpouring of praise for Fried?

Part of it of course is that in Washington, you get points for longevity regardless of your record. Recall the encomiums heaped upon Andrew Marshall a couple years ago when Marshall, who spent his career as the Pentagon’s chief policy hand, retired after four decades in 2015.

The Washington Post reverentially called Marshall “the Pentagon’s Yoda”; The Economist praised him as “the quiet American”; and that year a flattering book was released about Marshall entitled The Last Warrior: Andrew Marshall and the Shaping of Modern American Defense Strategy. In a review of the book, Notre Dame political scientist Michael Desch tartly noted that “at the end of the day, Marshall was not a saint but rather a public official who served too long and whose record was more mixed than his incense burners are prepared to admit.”

Another reason for the current praise for Fried’s address is that it combined two of the essential ingredients of the #Resistance that is currently so in vogue in today’s Washington: opposition to Trump and hostility to Russia – never mind whether the policy implications of such a stance are necessary or wise.

Days after he retired, Fried sat down with another tried-and-true Russia critic, former Moscow correspondent for The Washington Post Susan Glasser, and said that in his opinion, “Russia despises the West. And it is doing what it can to weaken the West.” Trump should not, said Fried, “be so desperate to rub up against a Russia which is busy trying to do us in all over the world.”

That Fried’s carries these opinions on Russia is unsurprising; a look at his career in the Foreign Service shows a diplomat who took the most hawkish positions possible regarding Russia in the post-Cold War period. Fried was a vocal champion of NATO enlargement, arguing, as U.S. Ambassador to Poland in January 1998 that “NATO membership had a stabilizing effect on Western Europe’s ‘ethnic rivalries’ and the prospect of membership in ‘the West’ has strengthened political moderates and weakened nationalists throughout Central Europe, to U.S. benefit.”

This assessment looks rather less than prescient in light of the recent rise in ethno-nationalist regimes in Poland, Hungary and, of course, Ukraine.

As U.S. Assistant Secretary for Europe under George W Bush, Fried declared that Russia’s defense of the ethnic Russian enclave of South Ossetia against the neoconservative puppet government of Mikheil Saakashvili was “not the sign of a strong nation. It is the sign of a weak one.”

Russia, said Fried, anticipating many of the same talking points we hear today, told The Washington Post in August 2008, “Russia is going to have to come to terms with the reality; it can either integrate with the world or it can be a self-isolated bully. But it can’t be both.”

Fried was one of the lead architects of U.S. sanctions against Russia in the aftermath of the Ukraine crisis and Crimean annexation. Having served as the State Department’s coordinator of sanctions policy, he recently argued that “without the sanctions the situation might well be much worse. And if you don’t think it can be worse then I think you just lack imagination. The Russians could have driven deeper into Ukraine and they could have tried to seize Mariupol or driven on land all the way to Crimea or attack Harkhiv. The sanctions may have stopped the Russians from going further.”

This summation is, to put it mildly, open to question, given that there is little evidence that the Russians even want the small part of Donetsk and Luhansk that they currently help to subsidize and support.

In the end, in judging the supposed wisdom of Fried’s recent fusillades against Trump and Russia we might look to the record of the man rather than his rhetoric.