President Trump toned down his combative rhetoric in speaking to Congress but, more significantly, ditched his campaign promises about détente with Russia and a reduced military presence abroad, says Gilbert Doctorow.

Donald Trump’s speech on Tuesday to a joint session of Congress was a reasonably well-crafted and well-delivered exercise in communicating his case to the nation. The President opened with a description of the flurry of executive orders in his first 30 days in office, implementing promises made during the electoral campaign.

He then went on to describe the contours of legislation that his administration will send to Congress, starting with the budget and its scrapping of the cap on military spending, which is to enjoy a 10 percent rise in appropriations while domestic and other government spending is slashed. Then there was a review of his plans to repeal and replace Obamacare and a preview of his proposals for cutting taxes and regulations with the goal of creating more well-paying jobs.

In an emotional highpoint, Trump drew attention to the widow of a Special Forces soldier killed in a raid inside Yemen. He also presented a more compassionate – less combative – tone, calling on Democrats and Republicans to put aside their differences and work together. His 60-minute address was interrupted 93 times by applause, often standing ovations from Republicans but also some applause from the Democratic side, too.

Trump seemed to bask in the enthusiastic show of support, although such State of the Union speeches typically draw the same sort of surface adulation, with the members from the party in power cheering robustly and those from the other side offering sparser shows of support. Still, the televised images contrasted with the portrayal from the mainstream U.S. news media of an embattled leader caught in a Watergate-like scandal over supposedly illicit contacts with Russia, a narrative Trump mistakenly fed with the hasty firing of National Security Adviser Michael Flynn on Feb. 13 during a media frenzy about Flynn talking with the Russian ambassador during the transition.

Flynn became the target of elements inside the U.S. government and the press who opposed Trump’s plans for détente with Russia. Those anti-détente forces are now flexing their muscles, with U.S. Ambassador to the United Nations Nikki Haley sounding much like her hawkish predecessor Samantha Power, insisting that the United States will not recognize Russia’s takeover of Crimea and then, this week, co-sponsoring a resolution in the U.N. Security Council condemning the Assad regime in Syria for allegedly using chemical weapons, a move that provoked angry protests and a veto from Russia’s envoy.

Meanwhile, Vice President Mike Pence, Secretary of State Rex Tillerson and Defense Secretary James Mattis carried messages to Europe reaffirming the U.S. commitment to NATO allies and blaming Russia for the failure of the Minsk Accords to resolve the crisis in Ukraine (although a major obstacle was created by the Ukrainian government when it insisted that ethnic Russian rebels in the Donbass region effectively surrender before other steps would be taken). The U.S. statements could have been delivered by neoconservative and liberal-interventionist diplomats from the past several U.S. administrations.

Only the last five minutes of Trump’s address to Congress dealt with foreign relations. And his own words were consonant with what his cabinet officers had been saying. Trump’s campaign opinions about NATO’s obsolescence had disappeared. Russia was not mentioned by name once in the speech, while America’s allies in NATO and in the Pacific were reassured that “America is ready to lead.” That statement was a rare instance when the entire congressional audience rose to its feet in applause.

Back on His Words

Those who had feared that Trump’s populism and “America First” rhetoric spelled isolationism were reassured that “Our foreign policy calls for a direct, robust and meaningful engagement with the world.” 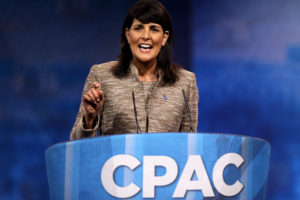 In fact, in the entire speech, there were only a few lines toward the end that might give heart to those who hoped that Trump might pursue a dramatically new foreign policy that drew back from America’s vast network of military bases and the tendency to intervene in other countries’ affairs.

Though sounding not unlike boiler-plate language that Presidents George W. Bush and Barack Obama might have used, those words did contain the possible seeds of a less warlike strategy. Trump said: “America is willing to find new friends and to forge new partnerships where shared interests align. We want harmony and stability, not war and conflict. America is friends today with former enemies. We want peace, wherever peace can be found. America is friends today with former enemies. Some of our closest allies decades ago fought on the opposite side of these terrible, terrible wars.”

Depending on the strength of one’s powers of self-delusion, those last words might be construed as a hint: just wait, allow me to get my footing and establish my popularity in Congress and in the broad public and I will come back and deliver on my détente aspirations.

But it is an inescapable reality that the firing of Flynn and Trump’s retreat from his foreign policy intentions were precipitated by the powerful collusion between the intelligence services, particularly the CIA, and the mainstream media with a clear intent to either neuter Trump by forcing a policy reversal on Russia détente or remove him through some form of impeachment. The phoniness of the McCarthyite charges of Russian connections used to smear Trump and his entourage has been well explained in recent articles by Professor Stephen Cohen in The Nation and by Gareth Porter at Consortiumnews.com.

Those with a more conspiratorial turn of mind have long spoken of the Deep State, which ensures continuity of policy whatever the results of U.S. elections with this subterranean power residing largely in the intelligence services, especially the CIA and FBI, in the Pentagon, and in the State Department.

State is said to have been purged in its policy-making “seventh floor” during the week of Secretary Tillerson’s European travels. But the text that was placed before the inexperienced Ambassador Haley for delivery in the Security Council shows that not all the old actors have been sent packing. Any purge of the CIA and Pentagon has not even begun.

The ability of neocons and hardliners at the Pentagon to sabotage presidential policy was demonstrated last September when a promising collaboration between Secretary of State John Kerry and Russian Foreign Minister Sergey Lavrov over a cease-fire in Syria was torn to shreds by an “accidental” attack by U.S. and Allied fighter jets on a Syrian government outpost at Deir ez-Zor that killed nearly 100 Syrian soldiers.

If these recalcitrant Cold Warriors in America’s “power ministries” remain untouched, they will be in a position to create provocations at any time of their choosing to override Trump’s planned détente policies. To do so would be child’s play, given the close proximity of U.S. and Russian forces in Ukraine, in Syria, in the Baltic States, on the Baltic Sea and on the Black Sea.

Given the poor state of relations and the minimal trust between Russia and the U.S.-led West, any accident in these areas could quickly escalate. And then we might see the side of Donald Trump’s personality that his Democratic opponents warned us about, his short temper and alpha-male nature which could bring us into an armed clash the outcome of which is unforeseeable but surely not good.

There is another troubling issue for those who hoped Trump would rein in military spending to finance his promised domestic infrastructure investments. Instead, Trump has focused on expanding military spending even more, financed by cuts in domestic spending. There has not been a word to suggest he is considering restructuring the $600 billion military appropriations, for example by cutting the military bases abroad, which are configured to support precisely the global hegemony and American imperialism that he has denounced.

What is at issue is not only the tens of billions of dollars in savings that would come from slashing this overseas base structure but also removing an American presence from countries where it only serves to foster anti-Americanism and to embroil us either in defending hated regimes or intervening in regional conflicts where we have no vital interests.

Without restructuring and reducing the gargantuan network of foreign military bases, the U.S. will be condemned to a never-ending succession of wars abroad and the entire plan of investment in America is doomed to failure. These are not issues that allow for tactical retreats but rather must be addressed head-on. But who will explain this to a headstrong President with the fawning applause of Congress ringing in his ears?

Gilbert Doctorow is a Brussels-based political analyst. His latest book, Does Russia Have a Future? was published in August 2015.

64 comments for “Trump Retreats on Detente with Russia”