The Trump administration has veered into dangerous territory with its threats against Iran, a threat to President Trump’s larger vision of a revamped international order, reports ex-British diplomat Alastair Crooke.

Donald Trump needs détente with Russia for precisely the opposite motives to those who oppose him: for the latter, tension with Russia wholly underpins the need for a U.S.-led, global defense posture that can draw on a storied, centuries-old (in the European case), legacy of hostility towards Russia. 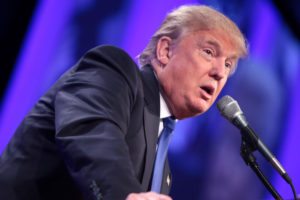 The continuance of this global “threat” meme, in its turn, pulls Europe and other pro-Western states into a tighter hug with the U.S. And, last but not least, a globalist defense strategy is an integral component to globalism itself (together with globalist financial institutions, and global economic governance).

At the heart of Trump’s critique of the post-war élites, precisely is the negative impact of globalization on U.S. production, trade and fiscal imbalances, and on the labor market. Trump cites the fact that U.S. industrial capitalism has drastically shifted the locus of its investments, innovations and profits overseas – as the prime example of globalization’s negative effects. To reverse the paradigm, he needs to undo America’s “defense globalization,” which effectively has been the umbrella under which the stealth forces of U.S. financialized globalism, and so-called, “free trade” policies, hide. Détente with Russia therefore, in, and of, itself, would help to dismantle the overarching “globalization paradigm.” This would give the U.S. President a better possibility of instituting a new, more self-sufficient, self-supporting American economy — which is to say, to facilitate the repopulation of the languishing American “Rust Belt“ – with some new, real, economic enterprise.

Détente not only would go a long way to wind back America’s over-extended and often obsolete defense commitments, and to make some of those now-committed “defense” resources newly available for reinvesting in America’s productive capacity needs. But crucially, taking a hammer to the globalized defense paradigm would break down what, until now, has been seen as a homogenized, single, American-led cosmos – into a collection of distinct planets orbiting in a vast space.

This would allow America to cut bilateral trading deals with other states (planets), freed from the need to maintain aloft a global defense “cosmos” primordially dedicated to keeping its “enemy” out, weak and in its own attenuated orbit (with no moons of its own).

President Trump seems to view (even a U.S.-led) global defense “cosmos” as an impediment to his planned transformation of America’s economy: As James Petras has pointed out:

“President Trump emphasizes market negotiations with overseas partners and adversaries. He has repeatedly criticized the mass media and politicians’ mindless promotion of free markets and aggressive militarism as undermining the nation’s capacity to negotiate profitable deals … Trump points to [previous] trade agreements, which have led to huge deficits, and concludes that US negotiators have been failures. He argues that previous US presidents have signed multi-lateral agreements, [primarily] to secure military alliances and bases, [but done so] at the expense of negotiating job-creating economic pacts … He wants to tear up, or renegotiate unfavourable economic treaties while reducing US overseas military commitments; and demands NATO allies [should] shoulder more of their own defence budgets.”

In short, Trump does not particularly want defense solidarity, or even European alliances, come to that. Simply said, such groupings serve (in his view) to inhibit America’s ability to negotiate, on a case-by-case, individual state-to-state, basis – and thus, by using leverage specific to each nation, achieve better terms of trade for America. He would prefer to deal with Europe piecemeal – and not as composite NATO or E.U. “cosmos,” but as the individual recipient (or not) of U.S. defense protection: a negotiating card, which he believes has been inadequately levered by previous administrations.

Remove the “Russian threat” from the game, and then America’s ability to offer – or withdraw – American defense shield becomes a hugely potent “card” which can be used to lever improved trade deals for the U.S., or the repatriation of jobs. In short, Trump’s foreign policy essentially is about trade policy and negotiation advantage, in support of his domestic agenda.

Seen against this background, Russian fears that Trump’s détente initiative cannot be trusted because his true underlying aim is to drive a wedge into the China-Russia-Iran strategic alliance may be misplaced. Trump wants détente with Russia, but that does not necessarily mean that he wants “war” with China. It is not plausible that Trump should want war with China. He wants trade; he believes in trade, but only on “equal” terms – and in any case, China simply doesn’t carry a legacy of China-phobia in any way comparable to the weight and longevity of the Western investment in Russo-phobia. There is no constituency for war with China.

This does not however mean that Russians have nothing to fear, and that Fyodor Lukyanov’s concerns about American wedge-driving, should be dismissed. They should not. But rather the fears, perhaps, should be contextualized differently.

As Paul Craig Roberts, the former Assistant Secretary to the U.S. Treasury, puts it: “President Trump says he wants the US to have better relations with Russia and to halt military operations against Muslim countries. But he is being undermined by the Pentagon. The commander of US forces in Europe, General Ben Hodges, has lined up tanks on Poland’s border with Russia and fired salvos that the general says are a message to Russia, not a training exercise [see here] … How is Trump going to normalize relations with Russia when the commander of US forces in Europe is threatening Russia with words and deeds?”

And now we have General Michael Flynn, Trump’s national security adviser, and well known as an Iranophobe, saying, “As of today, we are officially putting Iran on notice”:

Statement by the National Security Advisor

“Recent Iranian actions, including a provocative ballistic missile launch and an attack against a Saudi naval vessel conducted by Iran-supported Houthi militants, underscore what should have been clear to the international community all along about Iran’s destabilizing behavior across the Middle East.

“As of today, we are officially putting Iran on notice.”

Add to that statement the upsurge of violence in eastern Ukraine, most probably intentionally provoked by Kiev, and a botched U.S. military operation in Yemen that killed a Navy Seal, 8-year-old Nawar al-Awlaki and “numerous” civilians, and one might conclude that the combination of events are just too much of a coincidence.

Paul Craig Roberts further suggests that “the military/security complex is using its puppets-on-a-string in the House and Senate to generate renewed conflict with Iran, and to continue threats against China” to put a spoke in Trump’s wheel:

“Trump cannot simultaneously make peace with Russia and make war on Iran and China. The Russian government is not stupid. It will not sell out China and Iran for a deal with the West. Iran is a buffer against jihadism spilling into Muslim populations in the Russian Federation. China is Russia’s most important military and economic strategic ally against a renewal of US hostility toward Russia by Trump’s successor, assuming Trump succeeds in reducing US/Russian tensions. The neoconservatives with their agenda of US world hegemony and their alliance with the military-security complex, will outlast the Trump administration” [… and Russia knows this].

U.S. Presidents – even one such as Trump (who has given very few hostages to fortune during his campaign) – do not have a completely free hand in their choice of key cabinet members: sometimes circumstances demand that a key domestic interest is represented.

The endorsement of General James Mattis from the defense and security Establishment, for example, suggests that he has been wished upon President Trump in order to attend to U.S. security interests. Trump will understand that.

The question rather is whether Trump – in his choice of certain senior posts (i.e. that of General Flynn) – inadvertently, has laid himself open himself to manipulation by his Deep State enemies who are determined to torpedo détente with Russia.

Professor Walter Russell Mead in a recent Foreign Affairs article underlines just how deeply contrarian is Trump’s foreign policy.  It runs directly counter to the two principal schools of U.S. policy thinking since WW2 (the Hamiltonians and the Wilsonians), who “both focused on achieving a stable international system with the United States as “the gyroscope of world order.” It is, as Walter Russell Mead describes it, a cultural legacy that is deeply embedded in the American psyche.  It is doubtful whether Generals Mattis and Flynn, or others in the team, fully appreciate or endorse the full scope of Trump’s intended revolution. True belief, perhaps, is confined to a small circle around the President, led by Steve Bannon.

In any event, whether by external design or “inadvertent” happenstance, President Trump has two key members of his team, Flynn and Mattis, who are explicit belligerents towards Iran (see here on Mattis on Iran. It is however, less extreme, than the explicit manicheanism of Flynn).

Paul Craig Roberts says that “Trump cannot simultaneously make peace with Russia and make war on Iran and China.” That is true. But neither can Trump pursue his war on Islamic radicalism – the principal plank of his foreign policy platform – and in parallel, pursue a Flynn-esque antagonism towards Iran.

Trump will not co-opt Russia as an “aerial bombing” partner in such a regional war, while America is simultaneously attacking the only “boots-on-the-ground” security architecture that now exists in the Middle East capable of confronting Takfiri jihadism: the Syrian, Iranian, Hashad al-Shaabi and Hezbullah armed forces. There is none other.

It seems that President Trump’s weekend phone call to President Putin has quieted some of Russia’s concerns about the direction of America’s foreign policy, according to Gilbert Doctorow, but Rex Tillerson (now that he has been confirmed as Secretary of State) will need to have a serious discussion with Trump and his inner circle, and colleagues Mattis and Flynn, if Trump does not want his discreet dismantling of globalization disrupted by Russo-phobes – or his own Irano-phobes.

This assumes, of course, that Tillerson is not himself at least partly culturally embedded in the zeitgeist of America as the “gyroscope of the world order,” identified by Walter Russell Mead.

The problem for visionaries of any new order is that inevitably they start with such a tiny base of followers who really “get it.”  President Putin likely does “get it,” but can he too dare build from such a narrow base? Can Putin convince colleagues? Most Russians still recall the very bad experience of the Yeltsin détente with America. Can Trump and Tillerson pull this together?

42 comments for “Trump Veers Off Course with Iran Threats”