Exclusive: Despite President Trump’s tough law-and-order rhetoric, courts and schools are finding that “restorative justice” – as an alternative to traditional punishments – can reduce offenses and save money, writes Don Ediger.

Early next month, police in Portland, Maine, are scheduled to meet with 17 men charged with misdemeanors during a Black Lives Matter protest last July. At the meetings, they’ll discuss a wide range of subjects, from the motivation for the protests to the damage they caused. They’ll also talk about ways to prevent similar infractions in the future.

In Spotsylvania County, Virginia, training seminars are now available for school staff who are interested in ways to discipline misbehaving students without expulsion or other punishments that can interrupt their education.

These and dozens of other programs throughout the country are part of “restorative justice,” a term that a few years ago was almost unknown. Restorative justice has several meanings, but today it usually refers to a system where people who commit offenses can avoid jail time by repairing the damage they caused. 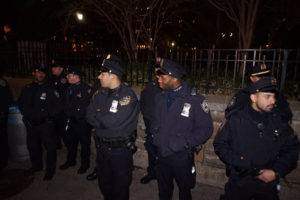 Police officers watch a rally in NYC on November 25, 2014 after the killing of Michael Brown in Ferguson, MO. (Flickr The All-Nite Images)

This restorative process plays out through “community justice conferencing” between perpetrators and victims. State courts also have restitution procedures, but restitution occurs at a much higher rate when it’s the result of an agreement between the victim and offender than when it’s ordered by a judge.

Restorative justice systems are also being adopted by schools and colleges that believe misbehaving students have a better chance of reform after they talk about their problems with the people they’ve hurt and with counselors who can recommend a better course for the future.

Her announcement was one of the few times that restorative justice has made the news, but experts in the subject say that’s likely to change in the next year or two. That’s because more courts and schools are using the process, because proponents are growing in number and because opponents have become more vocal.

Backers of restorative justice, including Dr. Gregory Zubacz of the Criminology & Restorative Justice Studies at Fresno Pacific University, cite reports showing that restorative justice costs less than standard court trials and that perpetrators are less likely to repeat offenses. When the cost of incarceration is included, he says, restorative justice is even cheaper when compared with the traditional system.

Zubacs points to a recent study showing that the average cost of a case that goes through the court system is $9,500 while a case diverted to the restorative justice process costs an average of $1,200 if the case is resolved before trial and probation for one year is ordered instead of incarceration. With incarceration, costs increase to upwards of $30,000 per year of incarceration.

He cites a recent Berkeley study that shows recidivism is considerably less in the restorative justice system than in the traditional judicial process: within three months of the offense, 26 percent of the juveniles whose cases had not been diverted to community justice conferencing (CJC) had re-offended, while only 6 percent of those in restorative justice had re-offended.

Opponents include many officials in the criminal court and penal systems.

“I would be very wary of arguments that restorative justice is beneficial to all involved,” says a former university official who ran the prison education system in a major Midwest state. “The sample data is so small that you cannot draw conclusions.”

He also points out that most criminals are aware of the consequences of a crime, both for the victim and themselves: “Or as guys in the joint say, if you can’t do the time, don’t do the crime.”

Proponents of restorative justice are accustomed to hearing detractors say that it’s soft on crime. “In fact,” says Zubacs, “it’s not soft on crime since the perpetrator must take personal responsibility. Sometimes juveniles would prefer to go to jail than have to sit down with their parents present and accept responsibility for their conduct.”

Criticism of restorative justice also comes from teachers. In Fresno, California, for instance, teachers have complained that some students aren’t suspended regardless of how many acts of violence they commit.

Last month, the Fresno Bee reported that at least 70 of the 85 teachers at McLane High School signed a petition demanding a stricter and more consistent student discipline policy than the school’s restorative justice system provides. Teachers say there are far too many disruptions and fights at the school and that teachers are often verbally abused.

The petition in Fresno may slow further implementation of restorative justice in the state, and so may the fact that no powerful organizations are yet backing the system. That’s a reason why proponents are trying to demonstrate, as in Portland, Maine, how restorative justice benefits governments and populations.

The person overseeing the process in Portland, Fred Van Liew, acknowledges that it’s often difficult to persuade officials in the criminal justice system to try restorative systems. Van Liew says, “The mantra back then and often now is that you do the crime, you do the time. Many think it’s being soft on the criminals. It just doesn’t fit within their world view.”

A demonstrator holds a sign at the inauguration of Donald Trump on January 20, 2017. (Photo: Chelsea Gilmour)

Van Liew has personal knowledge of the subject.  He’s a lawyer who served as assistant attorney general in his home state of Iowa. “In 1991,” he says, “I got a letter from a minister who recommended restorative justice. I had never heard of it, so I did some research, including reading Changing Lenses, the book on restorative justice by the criminologist Howard Zehr. That changed my life.” Zehr’s book is often cited as the impetus behind the U.S. restorative justice movement.

Even before he read the book, Van Liew had doubts about the traditional justice procedure, saying: “I didn’t think that a punishment-driven system made sense.  So when I found out that restorative justice suggests that the proper response to wrongdoing is to repair the harm, this immediately resonated with me. I got a hold of 25 copies of Changing Lenses and gave them to the mediators at the neighborhood mediation centers of the county attorneys’ offices. We all read the book and brought in a trainer and soon started doing intermediation in adult felony criminal cases.”

That was in 1991. Today Van Liew is a leader in the restorative justice movement. He says several of the prosecutors he’s working with in Maine tell him that restorative justice could make their jobs more meaningful. “It’s difficult being a prosecutor,” Van Liew says, “because you have to ask yourself if locking people up or fining them will really make a difference.”

Zehr told me that he believes the future is bright for restorative justice but that there may be many unexpected hurdles, chiefly because it often goes counter to the legal training of prosecutors and counter to their own view of self-interest.

As head of the Zehr Institute for Restorative Justice, which he founded in 2012, Zehr speaks regularly with prosecutors and defense attorneys. During these discussions, Zehr says, both sides often express their frustration with the current system. “Some of the attorneys tell me that restorative justice gives their careers a whole new meaning and reminds them of why they went into practice in the first place.”

Don Ediger is a veteran journalist who has worked for The Miami Herald, Associated Press, BusinessWeek and the International Herald Tribune, among other publications. He is currently a resident of Miami.

3 comments for “Getting Better Results Than Law-and-Order”