Presidents-elect of the United States generally have hewn to the dictum that the country has only one president at a time, and that this is especially important with foreign policy. The incoming president plans, appoints, announces, and does anything else he wants to indicate what his course will be after noon on January 20th, but until then it is the incumbent president who makes and executes U.S. policy and who negotiates with and makes demarches to foreign governments. Donald Trump has been behaving differently.

But even some of his previous moves during this current transition period, such as breaking with protocol on relations with Taiwan or telling the Chinese to keep the marine drone they stole, did not go as far in interfering with the execution of current policy as he now has gone regarding a United Nations Security Council on the Israeli-Palestinian conflict and matters in the occupied territories.

It is not only that Trump issued a statement that constituted an attempt to pressure the current administration into a course of action that would do the bidding of a foreign government. His operation met with a delegation organized by Israeli Prime Minister Benjamin Netanyahu, so secretly that Israeli press that learned of the visit describes it as “clandestine.” Trump also, following Netanyahu’s lead, pressed President Abdel Fattah al-Sisi of Egypt to withdraw the U.N. resolution that his country had introduced.

Even just as a matter of procedure, this violation of the one-president-at-a-time principle ought to have provoked outrage. That it did not provoke much may be due to Trump’s mastery of the art of diverting attention from a subject by quickly saying something else that is at least as likely to grab headlines. In this case the attention diverter was Trump’s comment about starting a new nuclear arms race.

As a matter of substance, Trump’s posture toward the U.N. resolution should be occasion for deep dismay. Long forgotten is his promise to be a “neutral guy” in addressing the Israeli-Palestinian conflict. Since he made that pledge he has come to terms with Sheldon Adelson and, through other statements and appointments, has made clear that he will be anything but neutral.

In case there was any remaining doubt about that as of a couple of weeks ago, all such doubt was erased with his appointment as ambassador to Israel of bankruptcy lawyer David Friedman — who, by his own words, including likening liberal U.S. Jews to Nazi stooges, and by his personal connections to the settler movement, is firmly opposed to peace and in favor of indefinite occupation. It would be less incredible for Friedman to become Israeli ambassador to the United States rather than the other way around, although even then he would be representing only an extreme right wing rather than the people and interests of Israel as a whole. 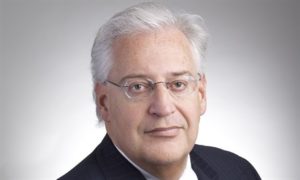 As for the newest U.N. resolution, Trump’s statement, echoing a familiar formulation that the Netanyahu government uses whenever the possibility of Security Council action arises, says that “peace between the Israelis and the Palestinians will only come through direct negotiations between the parties, and not through the imposition of terms by the United Nations.”

There is absolutely nothing in the draft resolution that Egypt had introduced that precludes or impedes direct negotiations between the parties or that suggests in any way that such negotiations will not still be necessary to set the terms of any final peace agreement. Far from “imposing” terms, the resolution declares the need to get beyond the obstacles that are preventing effective direct negotiations from taking place and being able to achieve a two-state solution that will be a lasting basis for peace between Israelis and Arabs.

That the resolution specifically mentions Israeli settlements in occupied territory simply reflects how this unilateral altering of facts on the ground has been steadily closing the negotiation space and making it ever more difficult for direct negotiations to set the terms of peace and arrive at a solution with two viable and secure states. That the resolution declares the colonization through settlements to be a “flagrant violation of international law” simply restates long-established principles of international law regarding the responsibilities of an occupying power in territory conquered through military force.

The draft resolution was comprehensive in identifying the obstacles to effective direct negotiations. It’s not just the settlements, and it’s not just what Israel is doing. The resolution “calls for immediate steps to prevent all acts of violence against civilians, including acts of terror, as well as all acts of provocation and destruction, calls for accountability in this regard, and calls for compliance with obligations under international law for the strengthening of ongoing efforts to combat terrorism, including through existing security coordination, and to clearly condemn all acts of terrorism.” The resolution further “calls upon both parties … to observe calm and restraint, and to refrain from provocative actions, incitement and inflammatory rhetoric.”

In light of all the above, Trump’s statement that the resolution “is extremely unfair to all Israelis” is baseless.

Anyone with a concern for Israel’s security and well-being should be aware that the continued colonization of the West Bank through expansion of settlements does not correlate positively with such security and well-being. To the contrary, it detracts from Israeli security. It involves an added burden on the Israel Defense Forces, and it is the most visible part of an occupation that is by far the biggest stimulus and support for those intending to do Israel harm.

The combined pressure from Netanyahu and Trump got al-Sisi to withdraw the resolution. It is appropriate for Egypt to play a leadership role in trying to improve the conditions for negotiation of an Israeli-Palestinian peace, for historical reasons dating back to the Camp David Accords of 1978. The peace treaty with Egypt that Israel sought was only one-half of the bargain struck at Camp David. The other half was supposed to be progress toward a peace covering the Palestinian territories. Anwar Sadat has been revolving in his grave over how, nearly four decades later, what process there has been has failed to yield an end to the occupation.

The case for the current resolution remains strong. Four other members of the Security Council — New Zealand, Malaysia, Senegal, and Venezuela — pressed ahead with the resolution even when a bullied Egypt backed off. The Obama administration deserves commendation for allowing the resolution to pass when it finally came to a vote on Friday. A positive vote in support would have been even better, rather than the United States once again being in a lonely position on U.N. measures involving Israel. In this case the United States was the only one of the 15 Security Council members that did not vote in favor of the resolution.

The Republican members of Congress who now are denouncing the administration even for abstaining should be made to point to words in the resolution itself and explain exactly what they allege is wrong with it. Otherwise they are just blindly following the lead of an Israeli government that will perpetuate the occupation, and the negative consequences that flow from it, forever.

Trump did not have to interfere with the incumbent administration’s diplomacy. It would give him more options to let the incumbents take the domestic political heat for breaking the pattern of repeated occupation-covering U.S. vetoes at the Security Council. Even if Trump is determined to stay in bed with the settlers and the Israeli right-wing, he could still assume such a posture starting on Jan. 20, however mistaken such a posture is.

Perhaps Trump’s abandonment of his “neutral guy” moment is another instance of his gravitating to wherever he hears the loudest applause, with that applause coming in this instance from the lobby that would scream the loudest if he were to move in a different direction. Perhaps it is an instance of his being swayed by whoever in his inner circle has most had Trump’s ear recently and been motivated to use that access to press special interests. That inner-circle member could be the lawyer who helped him through bankruptcies in Atlantic City. Or it could be Trump’s son-in-law, whom Trump has talked about as a Middle East envoy, who, like the lawyer, has personal ties to West Bank settlements, and who reportedly wrote, along with Stephen Bannon, the statement denouncing the resolution. Either way, this is a poor way to make U.S. foreign policy.

← The Good That Trump Could Do
A Christmas Message of Peace →