Hillary Clinton stood calmly at her podium smirking during most of the first U.S. presidential debate as she provoked emotional reactions from Donald Trump in what appeared to be a strategy to rattle him and keep him on the defensive most of the night.

Clinton needled Trump on his plan to fight the Islamic State, on him not paying his taxes, on his treatment of women, on his denial of climate change, on his denigration of Muslims and his position on nuclear weapons — all legitimate criticisms but delivered with an intent to do personal harm. As Trump grew angrier and angrier, Clinton appeared to be laughing at him. At one point, she told him he was saying “crazy things” and living “in his own reality.”

Clinton got under Trump’s skin by telling him he started life with a big inheritance, while she was the daughter of a humble small businessman; that he had four (or more) times filed for bankruptcy, did not pay his workers, called women “pigs,” and had been sued by the government 40 years ago for racial discrimination in a housing development he owned (and which he settled out of court).

Trump seemed uncharacteristically nervous and restrained as the first debate of three got underway, displaying a grudging respect for Clinton by calling her “Secretary,” while labeling her “Crooked Hillary” on Twitter. But a series of humiliating jabs by Clinton worked to get Trump’s back up leading to several gaffes, including an apparent admission that he has paid no federal taxes.

After noting that a couple of tax returns which had been released in connection with a casino application showed no federal taxes and suggesting that Trump would not release his tax returns because he may be hiding this reality for other years, Trump lost his cool and interjected that it “makes me smart” not to pay.

It was a calculating strategy on her part, cooked up by her team of ruthless campaign operatives and her own experience of 38 debates in her political career. This was Trump’s first one-on-one debate. And it showed. 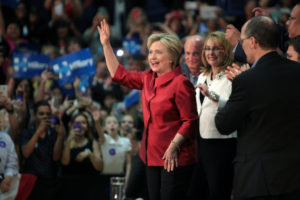 She took a week off to prepare, while Trump did not hold one mock session. She depended on a team of highly experienced opposition researchers who have dug up every scrap of dirt they could find on Trump.

“He loves beauty contests, supporting them and hanging around them,” Clinton said, slowly inserting the needle and twisting it slightly. “Then he called her ‘Miss Housekeeping,’ because she was Latina. Donald, she has a name.”

“Where did you find this?” he repeated.

That he wouldn’t know Clinton’s “oppo” researchers would come up with something like this, and then would blurt out his astonishment that they did from the podium is itself astonishing.

It showed how little he understood this dirty game of modern politics and how poorly prepared he was. His opposition research seemed to be based solely on the considerable Clinton negatives already in the public domain. He hit her hard on the emails, but she swatted it away, and Trump backed off.

Trump seemed to think he could wing it. But he ran into a political juggernaut, with master dirty tricksters like former rightwing operative David Brock conjuring up ways to rattle Trump, exposing his temper and his weak command of the facts. Meanwhile, a studied and scripted Clinton merely laughed at him, giving him the rope to hang himself.

Trump did score some points, though they have been largely ignored in a corporate media analysis that scored a decisive knockout for Clinton. In one exchange, she clearly said that Russia had hacked the Democratic National Committee and Trump called her on it.

CLINTON: “There’s no doubt now that Russia has used cyber attacks against all kinds of organizations in our country, and I am deeply concerned about this. I know Donald’s very praiseworthy of Vladimir Putin, but Putin is playing a really … tough, long game here. And one of the things he’s done is to let loose cyber attackers to hack into government files, to hack into personal files, hack into the Democratic National Committee.”

Trump’s rhetoric on Russia (and with no political record, rhetoric is all we have) is clearly saner than Clinton’s, who has an alarming record. It is simple to understand why Russia would favor Trump. He is not threatening Russia while she is. And she’s left a trail of destruction behind her in Libya, Syria and Honduras making it more than mere words.

No one has come up with any evidence to back up the Clinton campaign’s charge of a Trump conflict of interest because he either owes money or has business in Russia. Frankly, I hope he does have businesses there. It would make him even less likely to stir up a crisis with Moscow if he should win.

Nor has anyone come up with any evidence to prove Russia was behind the DNC hack. After the debate CNN either deviously or incompetently did a “fact-check” and said Trump was wrong about “the question that was posed, ‘Who is the leading suspect in the DNC hack?”

But Clinton didn’t talk about the “leading suspect.” She flat out said Russia did it.

Her continued hammering on these supposed business interests and that Russia did the hacking is suspicious. Linking Trump to Russia has done little to hurt him in the polls. In fact, he rose to a virtual tie in the weeks since the hack. So why does she keep at it? There could be something else at play, an admittedly sinister scenario, but entirely possible in the Clinton camp. (Perhaps, her “oppo” team is planning to drop another shoe regarding Trump’s relationship with Russia.)

If she should lose a close election to Trump I would not be surprised if she contested the outcome charging that Russia had hacked the electoral databases and changed the result. If she could challenge enough electors to bring him below 270 Electoral College votes needed to win, the result could be thrown to the House of Representatives (as it has three times in history) where a Republican majority, many who hate Trump, just may side with her.

With the way the American public has been relentlessly conditioned to fear and despise Russia, evidence of Moscow’s alleged tampering may not be needed. With the corporate media playing along, evidence wasn’t necessary for the tall tale of Russia’s “invasion” of Ukraine, the dubious claim that Russia was responsible for shooting down Malaysia Airline Flight 17 in 2014, or Russia’s supposed attack on a humanitarian convoy in Syria last week.

No Mention of Syria

Curiously, there was absolutely no discussion of Syria in the debate, beyond an incidental mention by Clinton. The focus was on the Islamic State’s threat inside the U.S. and what to do about it.

Journalist James Foley shortly before he was executed by an Islamic State operative.

Trump accused Clinton, as secretary of state, of creating a vacuum by pulling U.S. troops out of Iraq, allowing ISIS to be established. Here Trump insisted again that he never backed the 2003 invasion of Iraq, which he correctly said caused immense instability creating the conditions for ISIS.

But Trump missed a tremendous opportunity to hit Clinton for being secretary of state when a precursor of the Islamic State was directly aided by the administration she served in when the U.S. and its Mideast allies were seeking “regime change” in Damascus and tolerating jihadists who were spearheading the effort.

And this is the tragedy of Trump. He’s wrong on so many things: torture, climate change, tax breaks for the rich, increased military spending, law and order, stop and frisk, and guns. So, when he’s right, such as wanting good relations with Russia to avoid catastrophe, he doesn’t adequately explain his position, while being subject to a massive smear campaign.

Only on trade and rebuilding the country’s infrastructure has he been right for the good of American workers, and has also amply laid out this position (spending more time on that in the debate than anything else.)

Last month, Trump caused a firestorm when he said that Obama and Clinton had“created” ISIS. He later said Obama “founded” ISIS. While that is an exaggeration, there exists a document proving the Obama administration’s complicity in the rise of this group, a document Trump must be aware of, but has never made use of. The debate would have been the perfect time.

The declassified Defense Intelligence Agency document of August 2012 said the U.S., some European countries, Turkey and the Gulf Arab states were facilitating the establishment of a Salafist principality in the east of Syria to put pressure on Damascus. The document warns that likeminded jihadists on the Iraq side of the border could join with them to create an “Islamic State.” The document actually uses that name a full two years before the Islamic State was declared.

Trump must know about it because Ret. General Mike Flynn, the DIA director at the time, told Al Jazeera that the document shows the administration was not turning a blind eye to this but that it was a “willful decision” by Washington. Mike Flynn is a Trump foreign policy adviser, so it’s inconceivable that Flynn did not tell Trump about the document.

And yet Trump inexplicably has never mentioned it, even when he was under heavy fire from establishment Washington and the corporate media for his remark.

Instead of bringing it up at the debate, he merely attacked Clinton for revealing her plan to fight ISIS on her website. “I don’t think General Douglas MacArthur would like that too much,” Trump said, referring to the commanding U.S. general in the Pacific during World War II, a head-scratching reference for the vast majority of Americans born in the post-war era.

“Well, at least I have a plan to fight ISIS,” Clinton retorted.

“No, no, you’re telling the enemy everything you want to do,” Trump shot back.

Instead of mentioning the DIA document he repeated his numbskull idea that ISIS would not exist if his idea of “taking” Iraq’s oil had been followed. ‘Had we taken the oil — and we should have taken the oil — ISIS would not have been able to form either, because the oil was their primary source of income,” he said. “And now they have the oil all over the place, including the oil — a lot of the oil in Libya, which was another one of her disasters.”

Clinton cut his knees out from under him again, saying Trump “actually advocated for the actions we took in Libya and urged that Gaddafi be taken out, after actually doing some business with him one time.”

It looks like it may be a very long six weeks until Election Day for Donald Trump. And if  avoiding a confrontation with Russia is the single most important issue of the day, more urgent even than climate change, the alternative, a Clinton back in the White House, could be a very chilling four years for the rest of us.