The U.S. government gives free passes to officials who commit war crimes but imprisons whistleblowers who tell the truth, a fate that befell CIA’s John Kiriakou for disclosing torture. But he was honored by some ex-intelligence officers, reports Ray McGovern.

Former CIA official John Kiriakou, who spent two years in prison for revealing the truth about White House-sanctioned torture, became the 15th recipient of the Sam Adams Award for Integrity at a ceremony at America University.

Last year, PEN Center USA, a human rights and freedom of expression organization, honored John Kiriakou, with its “First Amendment” award. It has since become clear that while John Kiriakou sat in prison, Senate Intelligence Committee investigators were uncovering heinous details about torture by the CIA from its own original banality-of-evil cables, which showed that CIA and others had lied in claiming torture “worked.” 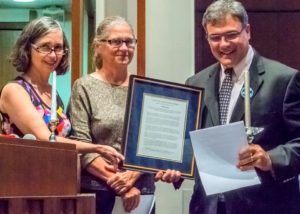 President Barack Obama chose to add his weight to a remarkably brazen effort to cover it all up and scuttle the Senate report. To her credit, committee chair Dianne Feinstein, with support from then-Senate Majority Leader Harry Reid and committee members Mark Udall and Ron Wyden (all Democrats) faced President Obama down.

This scarcely believable fact – missed somehow by the “mainstream” media – is woven into the citation presented to Kiriakou on Sunday:

The Sam Adams Associates for Integrity in Intelligence presents its INTEGRITY AWARD for 2016 to John Kiriakou Know all ye by these presents that John Kiriakou is hereby honored with the traditional Sam Adams Corner-Brightener Candlestick Holder, in symbolic recognition of Mr. Kiriakou’s courage in shining light into dark places.

John Kiriakou found himself atop the CIA’s WANTED list when he confirmed publicly that the CIA had been carrying out a White House-approved torture program, which turned out to be using techniques virtually identical to those in the Gestapo Handbuch.

Alarm bells at the CIA. Put this guy in prison before there are additional disclosures. And seduce Hollywood into seducing Americans into “seeing with their own eyes” that torture “works.” And make sure the media ignores others with impeccable credentials, like Army Intelligence chief Gen. John Kimmons, who said on September 6, 2006:  “No good intelligence is going to come from abusive practices. … the empirical evidence of the last five years, hard years, tells us that.”

Gen. Kimmons had an institution at his back, not nipping at his heels. Enter the U.S. Senate, another institution that faced into its constitutional responsibility. While John sat in prison, Senate Intelligence Committee investigators pored through original CIA cables and concluded unambiguously that Kimmons and Kiriakou were right, and the CIA (and Hollywood) were dead wrong.

Briefed on those findings, President Obama in August 2014 trivialized torture with a dismissive comment, “We tortured some folks.” Then he joined the CIA in a concerted attempt to squelch the Senate report. But Sen. Dianne Feinstein thwarted that joint campaign and in December 2014 published an executive summary – redacted, but still gruesome beyond imagination.

John Kiriakou’s integrity – and the reality that he sat in prison while the torturers were covering up their actions and their lies – made Sen. Feinstein’s intrepid investigators even more determined to make sure Americans got to know the truth about what was done in their name. As for John, it is a sure thing that he will continue to give no quarter in his passion for spreading truth around, no matter the systemic hurdles he may still have to surmount.

Presented this 25th day of September 2016 in Washington, DC, by admirers of the example set by the late CIA analyst, Sam Adams.

Sam Adams’s painstaking analysis in 1966/1967 revealed there were twice as many Vietnamese Communists under arms in South Vietnam as Gen. William Westmoreland would admit to. The issue became a David-v-Goliath bureaucratic struggle, with CIA analysts unable to prevail against the Army (and the White House). Adams continued to press for honesty and accountability but stayed “inside channels” – and failed. He died at 55 of a sudden heart attack, with profound remorse. He could not rid himself of the belief that, had he not let himself be diddled – had he, in other words, gone to the media – hundreds of thousands of lives might have been saved. His story is told in War of Numbers, published posthumously.

Previous recipients of the Sam Adams Award are:

Ray McGovern, like Sam Adams, began a career as a CIA analyst under President Kennedy; working on Vietnam, they became close associates. Sam was too straight-arrow to go to the media about the unconscionable fraud regarding the number of Communist forces. Ray knew that and rationalized not doing so himself. So, while a close associate of Sam Adams years ago, Ray fell short of the standard set by the above awardees, who deserved to be honored by Sam Adams Associates for Integrity in Intelligence.