A recent congress of major conservation groups soft-pedaled criticism of the U.S. military and other war-makers despite the massive damage they inflict on humans, animals, plants, cultural sites and the environment, reports retired Col. Ann Wright.

The International Union for the Conservation of Nature (IUCN) has come in for criticism due to its lack of attention to the detrimental effects of wars and military operations on nature. Considering the degree of harm to the environment coming from these human activities, one would think that the organization might have set aside some time at its World Conservation Congress this past week in Hawaii to specifically address these concerns.

Yet, of the more than 1,300 workshops crammed into the six-day marathon environmental meeting in Honolulu, followed by four days of discussion about internal resolutions, nothing specifically addressed the destruction of the environment by military operations and wars. 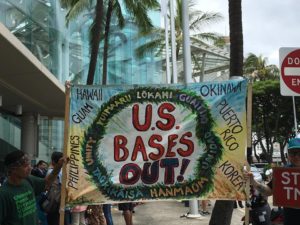 The heavy funding the IUCN gets from governments is undoubtedly the rationale for not addressing this “elephant in the room” at a conference for the protection of the endangered planet – a tragic commentary on a powerful organization that should acknowledge all anti-environmental pressures.

At a presentation at the USA Pavilion during the conference, senior representatives of the U.S. Army, U.S. Air Force and U.S. Navy regaled the IUCN audience of conservationists with tales about caring for the environment, including protecting endangered species, on hundreds of U.S. military bases in the United States.

The presenters did not mention what is done on the over 800 U.S. military bases outside of the United States. In the one-hour military style briefing, the speakers failed to mention the incredible amounts of fossil fuels used by military aircraft, ships and land vehicles that leave mammoth carbon footprints around the world. Also not mentioned were wars that kill humans, animals and plants; military exercise bombing of entire islands and large swaths of land; and the harmful effects of the burn pits which have incinerated the debris of war in Afghanistan and Iraq.

Each military service representative focused on the need for training areas to prepare the U.S. military to “keep peace in the world.”  Of course, no mention was made of “keeping the peace” through wars of choice that have killed hundreds of thousands of persons, animals and plants, and the bombing of the cultural heritage in many areas around the world including Afghanistan, Iraq, Syria, Pakistan, Libya, Yemen and Somalia.

Miranda Ballentine, Air Force Assistant Secretary for Installations, the Environment and Energy, said the U.S. Air Force has over 5,000 aircraft, more than all the airlines in the United States — yet she never mentioned how many gallons of jet fuel are used by these aircraft, nor how many people, animals and cultural sites the aircraft have bombed.

To give one some idea of the scale of the footprint of U.S. military bases, Ballentine said Air Force has over 160 installations, including 70 major installation covering over 9 million square miles of land, larger than the country of Switzerland, plus 200 miles of coastland.

Incredibly, Ballentine said that due to commercial development around military bases, military bases have become “islands of conservation” — conservation takes place inside the protected base while there are larger conservation issues outside the fence lines of the bases.

Adding to the mammoth size of the military base footprint, Dr. Christine Altendorf, the regional director of the U.S. Army’s Installation Management Command of the Pacific, said U.S. Army bases have 12.4 million acres of land, including 1.3 million acres of wetlands, 82,605 archeological sites, 58,887 National Historical Landmarks and 223 endangered species on 118 installations.

The U.S. Navy’s briefer, a Navy Commander, added to the inventory of military equipment, saying the Navy has 3,700 aircraft; 276 ships, including 10 aircraft carriers; 72 submarines. Seventy naval installations in the United States have 4 million acres of land and 500 miles of coastline. The Navy presenter said the Navy has never heard of a marine mammal that has been harmed by U.S. Naval vessels or acoustic experiments in the past ten years.

At the end of the three presentations, there was time for only one question — and luckily, my intense hand waving paid off and I got to ask: “How can you conserve nature when you are bombing nature in wars of choice around the world, practicing military operations in areas that have endangered species like on the islands of Oahu, Big Island of Hawaii, Pagan, Tinian, Okinawa and bombing islands into wastelands like the Hawaiian island of Koho’olawe and the Puerto Rican island of Vieques  and now you want to use the North Marianas ‘Pagan’ Island as a bombing target. And how does the construction of the new South Korean naval base in pristine marine areas of Jeju Island that will be used by the U.S. Navy and the proposed construction at Henoko of the runways into the pristine Oura Bay in Okinawa fit into conservation of nature?” 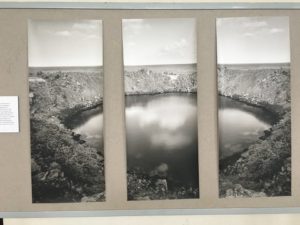 A crater that was created on the Hawaiian island of Koho’olawe from massive explosions of TNT in 1965. (Photo from Hawaii Archive)

Interestingly, in the large audience of approximately 100 people, not one of them applauded the question indicating that either audience was composed primarily of Department of Defense employees, or that the conservationists are uneasy about confronting the U.S. government and particularly the U.S. military about its responsibility for its large role in the destruction of much of the planet’s environment.

The Navy representative was the only person to respond to my question. He reiterated the national security necessity for military exercises to practice to “defend peace around the world.” To his credit, he acknowledged the role the public has in commenting on the possible impact of military exercises. He said that over 32,000 comments from the public have been made on the Environmental Impact Assessment (EIA) of the possibility of artillery firing and aircraft bombing of the Northern Marianas island of Tinian — that has only 2,300 inhabitants.

Despite all odds, someone in Hawaii was able to get an exhibit of photographs of the cleanup of Koho’olawe placed on the third floor of the Hawaii Convention Center. There was no sign announcing the exhibition, just a series of photos with some explanation. In five days of attending the conference, I observed that 95 percent of the conference attendees who walked past the exhibition did not stop to look at it – until I stopped them and explained what it was about. Then, they were very interested.

From 1941 to 1990, the island of Koho’olawe was used as a bombing range for U.S. military aircraft and naval vessels. One photograph in the exhibition showed the crater called “Sailor’s Hat” which was made by several massive explosions of TNT in 1965 to recreate and study the effects of large explosions on nearby ships and personnel to simulate in some manner the effects of a nuclear explosion. The crater affected the island’s fresh water aquifer and now no artesian water remains on the island.

After Hawaiians stopped the bombing through their protests and by staying on the island during bombings from the 1970s, the U.S. Navy returned Koho’olawe to the State of Hawaii in 2004 after a 10-year clean-up process. But only 66 percent of the surface has been cleared of unexploded ordnance (UXO), and only 10 percent cleared to a depth of 4 feet. Twenty-three percent of the surface remains uncleared and 100 percent of the waters surrounding the island have not been cleared of UXO, putting divers and ships at risk.

Environmental activists from Okinawa had a booth at the IUCN at which they told about the attempt of the U.S. military and the national Japanese government to construct a runway complex into Oura Bay, a pristine marine area that that is the home of the protected species of marine mammal, the dugong.

The Deputy Governor of Okinawa and the Mayor of Nago city, Okinawa, both of whom have been key figures in the grassroots campaign to stop the construction of the runways and the lawsuits filed by the provincial government of Okinawa against the federal Japanese government, gave presentations about the citizens’ struggle against the construction of the runways.

However, there was no mention of the environmental effects on the marine environment from the construction of a huge new naval base on Jeju Island, South Korea, the site of the previous IUCN conference four years ago. At that conference, IUCN, no doubt at the request of the South Korean government, refused to allow citizen activists to have a booth inside the convention or make presentations like the Okinawans did this year. As a result, the Jeju Island campaigners were forced to stay outside the conference site.

Four years later in the 2016 WCC conference in Hawaii, the Government of Japan and the Province of Jeju Island sponsored a large multi-media pavilion about Jeju island which did not mention the construction of the new naval base and the destruction of the cultural heritage of the site nor the displacement of women divers who had dived at the location for generations.

On Sept. 3, local groups in Honolulu came to the Hawaii Convention Center with signs to remind the IUCN of the U.S. militarization of Asia and the Pacific. Signs and posters from local environmentalists cited the environmental impact from the huge 108,863-acre Pohakuloa bombing range on the Big Island of Hawaii, the largest U.S. military installation in the Pacific; the Aegis missile test center on the island of Kauai; and the four large U.S. Army, Navy, Air Force and Marine bases on the island of Oahu.

Other signs referenced the extensive number of U.S. military bases in Japan, Okinawa, South Korea, Guam and new U.S. military installations in the Philippines and Australia.

Ann Wright served 29 years in the US Army/Army Reserves and retired as a Colonel.  She also served 16 years as a US diplomat in US Embassies in Nicaragua, Grenada, Somalia, Uzbekistan, Kyrgyzstan, Sierra Leone, Micronesia and Mongolia.  She was on the small team that reopened the US Embassy in Kabul, Afghanistan in December 2001.  She resigned from the US Department of State in March 2003 in opposition to the war on Iraq

← Greasing the Outstretched Hands
Donald Trump Is Us →

20 comments for “Greenwashing Wars and the US Military”