Donald Trump with his tangled business dealings is a walking conflict of interest, but Hillary Clinton’s connections to the world of high finance and political pull creates its own problems with outstretched palms, writes Michael Winship.

The recipe could not be simpler. Mix cynicism with greed, quickly stir and voila! American politics and government served up on a platter to the highest bidder.

Call it low cuisine. And it doesn’t get any lower than what we’ve seen during this wretched campaign season — a presidential contest that, as one friend in Washington recently said, pits “the unethical versus the unhinged.”

Mr. Moneybags from the “Monopoly” game

Psychiatric evaluations notwithstanding, for sure each of the two candidates is the byproduct of crony capitalism run amok. Donald Trump started out boasting that his much-flaunted wealth meant that he could self-fund his campaign and that this made him incorruptible, a feckless notion that went flying out the window as soon as he became the presumptive, official party nominee and went running to fat cat funders with his diminutive hands out.

As The Washington Post’s Matea Gold reported Sept. 1, “The New York billionaire, who has cast himself as free from the influence of the party’s donor class, has spent this summer forging bonds with wealthy GOP financiers — seeking their input on how to run his campaign and recast his policies for the general election, according to more than a dozen people who have participated in the conversations.”

And let’s not get started on the wacky world of Trump’s actual finances, his bragging about using cash to buy political favors, his failure to release tax returns, his dodgy connections with overseas banks, Russian plutocrats and organized crime. “It is safe to say,” The New York Times recently reported, “that no previous major party presidential nominee has had finances nearly as complicated.”

Now there’s a classic Times understatement for you. It continues:

“As president, Mr. Trump would have substantial sway over monetary and tax policy, as well as the power to make appointments that would directly affect his own financial empire. He would also wield influence over legislative issues that could have a significant impact on his net worth, and would have official dealings with countries in which he has business interests.”

What a swell idea to put him in charge. Not that Hillary Clinton and husband Bill are polestars of virtue. They seem to have gone out of their way to favor the wealthy and make sure they themselves always have a well-upholstered seat at the groaning banquet table of foundation, government and political largesse.

There’s plenty of history here. Back in the day, in many ways Bill Clinton was the most helpful president the rich have had since Andrew Carnegie, JP Morgan and John D. Rockefeller bankrolled William McKinley’s 1900 campaign and had their own bought-and-paid-for pal in the White House.

Harken back to 1993, the first of William Jefferson Clinton’s eight years in office. An alleged reform was passed that in reality contained one of the best escape clauses ever. The White House capped the tax deductibility of CEO compensation at $1 million, theoretically to cut down on runaway executive salaries. Good idea.

But raise my rent, look here – there was a loophole large enough to drive a fleet of Brink’s trucks through. Banks could still deduct stuff like stock options, cash bonuses and other kinds of “performance pay.” So compensation could run wild — and did. Wall Street’s fat cats got enormous raises at the expense of the rest of us poor suckers, er, taxpayers.

When we staggered into financial freefall in 2008, the Clinton-era loophole was closed until the banks paid off what they owed for the massive government bailout. As a result, the banks rushed to pay the debt back at an unseemly fast rate, even as mortgage holders lost their homes and millions their jobs. Once they paid what they owed, the good times rolled even bigger and louder for the rich and comfy bankers of Wall Street. And taxpayers paid the price for the financial industry’s massive write-offs.

In a shocking new report from the Institute for Policy Studies (IPS), “The Wall Street CEO Bonus Loophole,” co-authors Sarah Anderson and Sam Pizzigatti write, “The more US corporations hand out in CEO bonuses, the less they pay in taxes. … After getting out from under the bailout limits on deducting executive compensation, the top 20 US banks paid out more than $2 billion in fully deductible performance bonuses to their top five executives between 2012 and 2015. At a 35-percent corporate tax rate, this translates into a taxpayer subsidy worth more than $725 million over the four-year period, or $1.7 million per executive per year on average.”

The leading culprit was Wells Fargo CEO John Stumpf: “Between 2012 and 2015, years in which the bank faced $10.4 billion in misconduct penalties, Stumpf pocketed more than $155 million in fully deductible performance pay. This works out to $54 million in tax subsidies for Wells Fargo — just for one man’s bonuses.” And this at a time when the bank was holding some 85,000 mortgage loans in foreclosure. 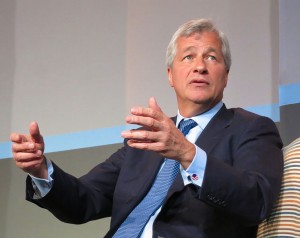 Many of the other bank CEOs, the men we’ve come to love to hate — and big-dollar contributors to the Clinton Foundation and various Clinton campaigns — also make an appearance in the IPS report. Jamie Dimon of the nation’s largest bank JPMorgan Chase — the fellow said to Barack Obama’s favorite banker — “cashed in $22.9 million in stock options in February and March 2010, at the peak of the foreclosure crisis.”

Then there’s Lloyd Blankfein, CEO of Goldman Sachs, the man infamous for telling the Times of London in 2009 that his bank was “doing God’s work,” head of the very same gang that gave Hillary Clinton those big six-figure lecture fees you’ve heard about.

According to the IPS report, “The value of Goldman Sachs stock has never regained the value it enjoyed in the heady days before the market?slide, and so all of Blankfein’s $28.9 million in deductible performance bonuses were cashed in before the bank’s?longtime shareholders were out of the red.”?Sweet.

Sarah Anderson of IPS says, “Taxpayers should not have to subsidize excessive CEO bonuses at any firm… [S]uch subsidies are particularly troubling when they prop up a pay system that encourages the reckless behavior which caused one devastating national crisis — and could cause more in the future.”

Hillary Clinton has claimed she wants to get rid of the deductible performance pay loophole, but there are several bills out there that would do the job and so far she hasn’t endorsed any of them. Why would she when she already relies so heavily on the counsel — and campaign cash — of many of these bank CEOs and their elite associates at law firms and corporations?

So far, close to half a billion dollars have been raised for her campaign, $50 million alone during the last two weeks of August at 22 fundraisers. According to The New York Times, that’s an average of $150,000 an hour.

It’s all part of a long tradition going back to Bill and beyond. And despite the objections of those who say there’s no evidence of a direct link between money given and favors granted, remember: It’s not just about the quid pro quo. It’s about the web of influence, the nod to the insider, the guy who knows a guy who knows a guy.

We are dealing, Ryan Grim and Daniel Marans recently wrote at The Huffington Post, with “a worldwide capitalistic system in which oligarchs, corporate CEOs and celebrity heads of state mingle to form a global elite that dictates a global agenda. This can sometimes take the form of quid pro quos, but it is more often a subtle form of exchange, in which exclusion from or inclusion within an elite club depends as much on whom you know as the size of the check you can write. … The Clintons did not create this system, but they have become central players within it.”

Which brings me around to a study from two Dutch political scientists, Bastiaan van Apeldoorn and Nana de Graaff, who took a look at the key policymaking personnel in the Bill Clinton, George W. Bush and Obama administrations.

“Grand strategy makers” — GSM — that’s what the researchers call them. According to Paul Street at the Truthdig website, they found that “23 (more than 70 percent) of Obama’s top 30 GSMs had ‘top-level corporate affiliations’ — executive, director, senior adviser or partner in a law firm — prior to their appointment to the U.S. executive branch.

“These 23 were linked through a combination of board memberships, executive positions and advisory roles to 111 corporations. These ‘affiliations in many cases display a revolving door pattern, indicating that the actors are not just closely tied to but actually themselves members of the corporate elite.’”

If you wonder why inequality grew under Bill Clinton, Bush and Obama, all the numbers in the paragraphs above are some of the reasons. Capital holds a privileged status over labor, and CEOs are exalted over employees.

How can you be sure a Hillary Clinton White House will be any different? Given all the evidence, given the billions of dollars in play, you can’t.

But here’s one hopeful sign: Politico reports, “Sen. Elizabeth Warren and her allies aren’t waiting for Election Day: Months before the votes have been counted, they’re already exerting pressure on Hillary Clinton’s transition team over key hiring decisions… They’re vowing to fight nominees with ties to big banks, and warn against corporate executives assuming government roles in regulating the industries that made them rich.”

Warren believes “personnel is policy.” She and her colleagues have reserved an especially hot place for the Wall Street big shots and corporate nabobs who fancy a job in the Clinton administration. It’s called the “Hell No” list.

Attention must be paid to that list or with a Clinton back in office it’s four more dreary years of greased palms and the status quo. That could be a recipe for disaster almost but not quite as horrific as an egotistical know-nothing with his fingers in the piggy bank and worse, near the button.

Michael Winship is the Emmy Award-winning senior writer of Moyers & Company and BillMoyers.com, and a former senior writing fellow at the policy and advocacy group Demos. Follow him on Twitter at @MichaelWinship. [This article originally appeared at http://billmoyers.com/story/outstretched-palms-candidates/]

14 comments for “Greasing the Outstretched Hands”