San Francisco 49ers quarterback Colin Kaepernick refuses to stand for the national anthem in protest against U.S. oppression of “black people and people of color,” a concern underscored by the origins of “The Star-Spangled Banner,” writes Sam Husseini.

As several writers have noted — before and after the furor surrounding quarterback Colin Kaepernick refusing to stand for “The Star-Spangled Banner” — the national anthem is racist. Specifically, the third stanza, which references the British offering freedom to African-American slaves who would join with them in the War of 1812, says:

No refuge could save the hireling and slave From the terror of flight or the gloom of the grave, And the star-spangled banner in triumph doth wave O’er the land of the free and the home of the brave. Even less well know, the song originates in slaveowner Francis Scott Key’s “When the Warrior Returns” — which was set to the same tune. As Alex Cockburn, the deceased and much missed co-editor of CounterPunch, noted following President Obama’s much celebrated 2009 address in Cairo: 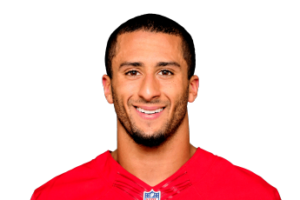 “An early version of the ‘Star Spangled Banner’ by Francis Scott Key, written in 1805 amid the routing of the Barbary states, offered a view of Islam markedly different from Obama’s uplifting sentiments in Cairo:

In conflict resistless each toil they endur’d,

Till their foes shrunk dismay’d from the war’s desolation:

And pale beamed the Crescent, its splendor obscur’d

By the light of the star-bangled flag of our nation.

Where each flaming star gleamed a meteor of war,

And the turban’d head bowed to the terrible glare.

Then mixt with the olive the laurel shall wave

And form a bright wreath for the brow of the brave.

“In 1814, Key rehabbed this doggerel into the Star Spangled Banner. So America’s national anthem began as a gleeful tirade against the Mahommedans. And, of course, every member of the U.S. Marine Corps regularly bellows out the USMC anthem, beginning ‘From the halls of Montezuma to the shores of Tripoli.’ “In short, America’s march to Empire was minted in the crucible of anti-Islamic sentiment. (One admirer of this early chapter in America’s imperial confrontations with Islam is that ardent Crusader, C. Hitchens who cites Joshua London’s Victory in Tripoli: How America’s War with the Barbary Pirates Established the U.S. Navy and Shaped a Nation, on the origins of the Star Spangled Banner.)” 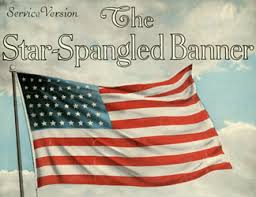 I actually first learned of the racism underlying the national anthem from Alex Cockburn’s 1987 book Corruptions of Empire, which features a splendid cover.

Note to illustration on the front of jacket: In August 1814, a British raiding party led by Admiral Sir George Cockburn launched an attack on Washington. They set fire to the Capitol, then proceeded to the White House and, before setting fire to it, consumed a meal set out by Dolly Madison which had been abandoned by the fugitive President and his family. Cockburn next proceeded to the offices of The National Intelligence to avenge himself on the press which had abused him. He ordered his men to destroy the paper’s printing types, saying ‘Be sure that all the Cs are destroyed so that the rascals cannot any longer abuse my name’.

Cockburn then laid siege to Baltimore, the unsuccessful fusillades prompting the composition of ‘The Star Spangled Banner’, whose reference to ‘the hireling and slave’ in the British force alludes, as Robin Blackburn points out in The Overthrow of Colonial Slavery, to the fact that Cockburn had offered freedom to all slaves who would join him in his attacks of 1813 and 1814. According to a British report these slaves conducted themselves very well and ‘were uniformly volunteers for the Station where they might expect to meet their former masters.’ Some of these black recruits were in the party that burned the White House.

Alex’s brothers Andrew and Patrick have also written about this.

This highlights the darkest heart of the United States, eager to assault indigenous people — be they Africans, or natives of what we call “America,” or Berbers or Arab or whoever. Native Americans who are perceived as having been defeated can now be romanticized to an extent, while Arabs and Muslims who are not eager to roll over for U.S. establishment power are demonized. It also highlights that racism and violent nationalist identity are closely intertwined and attempts at separating the two may well be mere cover for both.

Sam Husseini is founder of VotePact.org.

20 comments for “Troubling Origins of ‘The Star-Spangled Banner’”