Official Washington loves to show heartbreaking images of wounded Syrian children with the implicit message that it’s time to invade Syria and impose “regime change” (rather than commit to peace talks), a dilemma addressed by Michael Brenner.

The Syrian imbroglio is the most complex politico-military conflict of modern times. In terms of number of players, diversity of interests and purposes, intermingling of sectarian and secular ideologies, multiple connections with external parties, and harlequin patterned battlefield, the field of action is unique. Only the Spanish Civil War exhibited a similar mix of elements, although it was simplicity itself by comparison to Syria.

A unique, complicating feature of the Syrian conflict is that the behavior of various leaders appears to follow no discernible logic. Islamic State leader Abu Bakr al-Baghdadi, Crown Prince Mohammed al-Salman of Saudi Arabia, President Recep Tayyip Erdogan of Turkey are not just dogmatic autocrats; their actions are dictated more by emotion than reason.

As for the United States, the Obama administration flails about with no evident strategy in a vain effort to square circles. That places it in the untenable position of allying with Al Qaeda to unseat the Assad regime and, above all, to thwart Russia.

Hence, we provide diplomatic cover, weapons indirectly via the CIA “rat line” to its subordinate partners, and tacit approval of overt Turkish and Saudi material support for the jihadis which includes sophisticated anti-armor TOWs and Man-Pads (portable anti-aircraft weapons) originating in the United States. No one in official Washington feels obliged to answer the most elementary questions about the probity of such a policy. Indeed, almost no one poses it.

If one were to reach for a metaphor to depict this singular state of affairs, one might imagine a six-team match of all-in rugby played in a crowded shopping mall without rules or umpires or time limit.  Tactical alliances are as fluid as are the side deals made by riders in the notorious Palio in Siena.

The core contradiction at the heart of the Obama administration’s confused actions in Syria is seeking simultaneously to get rid of President Bashar al-Assad and to suppress the jihadi groups. The simple, uncomfortable truth is that the rebel opposition to the Assad regime is organized by, and overwhelmingly manned by Al Qaeda/Al Nusra and affiliated Salafist groups, and the independent Islamic State (also known as ISIL, ISIS or Daesh).

Both jihadi factions owe their successful development to the backing from Washington’s “allies”: Turkey, Saudi Arabia and Qatar. That continues to this day as the provision of arms, training, and recruitment of reinforcements has made possible the Al Qaeda-led counter-offensive around Aleppo.

Obama’s overriding commitment to maintaining close relations with all three “allies” is a major element explaining why Washington has done next to nothing to rein in Al Qaeda’s coalition while observing restrictions in cutting off Islamic State commerce and financing.

Underlying that policy judgment is a shared interest in isolating and weakening Iran by uprooting their ally in Damascus – thereby striking a blow against the supposedly Shi’ite side in the Shi’ite-Sunni civil war that is wracking the Islamic world.

The other determining consideration in Washington’s thinking is the conviction that Russia represents the greatest security challenge for the United States – in the Middle East and in Europe. Secretary of Defense Ashton Carter reiterated the oft-stated view that Russia is security threat Number One just last week. The Islamic State has slipped to Number 5 – behind China, Iran and North Korea as well as Russia. Al Qaeda doesn’t make the cut. 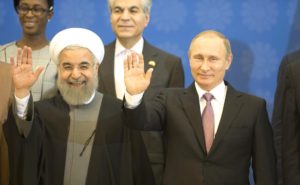 So, it follows that Washington’s priority in Syria as of now is to stymie all and any efforts by Russia to establish its presence in the country and to shape developments. Dealing with terrorism has been downgraded to the status of a subordinate concern – despite the havoc that it has wreaked locally and terrorist atrocities in the West. And, one should add, despite repeated alarums from the President and other high officials for years that ISIL was an imminent threat to basic American interests.

Here, a practical differentiation is made between ISIS and Al Qaeda & Associates on grounds other than pure threat potential. Does this make strategic sense? Is it logically consistent? Obviously, no.

As the ISIS phenomenon fades – in terms of strength on the ground and allure, it is becoming obvious that the greater long-term threat to regional stability and terrorist threat is the better-organized, more disciplined Al Qaeda.

Again, the Obama administration does not provide answers to these questions; indeed, our heated public discourse ignores them. Obama himself is a puzzle. His actions suggest cynicism and a lack of candor. His demeanor, at other times, suggests that he is numbered among the earnest naifs who can persuade themselves that women beach volley ball players wear bikinis because they are aerodynamically advantageous for spiking. Or, he manages to live at multiple levels of reality simultaneously.

There are also domestic political considerations at play that encourage stressing the distinction between Al Qaeda and the Islamic State. There is enormous political capital to be gained from rolling back ISIS. After all, it is ISIS that has dominated the headlines and struck fear into the hearts of Western publics.

Al Qaeda somehow seems a bit passe – realities notwithstanding. Think of what this means for a President-elect and then-President Hillary Clinton. Success against ISIS immediately would put wind in the sails of an administration that otherwise will be struggling to cope with an unraveling political system, a likely Republican dominated, truculent Congress, and a host of unfulfillable promises.

By contrast, keeping her campaign pledges to intervene more directly by military means in the Syrian civil war is high risk, unlikely to succeed, and might well split the Democratic Party. There is a possible “out” for Clinton – if not for the neocons and hardliners who have aligned with her in the hope that she follows a more aggressive strategy.

If ISIL is weakened to the point where Washington can declare some sort of victory, that could provide political cover for temporizing on Syria. That is, to allow the “dynamic stalemate” to continue – thereby also satisfying Erdogan who could continue to back Al Qaeda/Al Nusra and friends while leaving ISIS pretty much to its fate. (And accept the increased risk of ISIS terrorist acts in Turkey as a consequence).

Russia would be stymied and frustrated by the inability to mobilize enough force to overcome the significant reinforcement of men and equipment coming from, and through, Turkey. While such an approach does not carry the seed of a resolution, it does conveniently kick the can down the road at little cost.

That brings us to the latest bewildering episodes.

–The visit of Erdogan to Moscow where he met with President Vladimir Putin in what was widely described as a reconciliation encounter. Little has been said about concrete agreements, though – surely not as regards Syria. 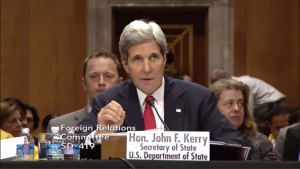 Indeed, Erdogan stressed in a press conference that Turkey remains committed to backing the jihadi-led opposition in an unrelenting effort to remove Assad. Putin made only passing allusion to Syria although these are the very things that Russia has sought to prevent by its military intervention. Why?

The meeting probably was intended to insulate the clear divergence of interest/policy over Syria from long-term Russo-Turkey relations. The two countries implicitly share broad strategic concerns arising from their alienation from the U.S. and Western security arrangements.

Erdogan is playing the Russia card to extract further concessions from the United States and the European Union which are anxious about a possible Turkish defection to “the other side.” Putin aims to open a diplomatic line to Ankara which is a precondition to bringing a semblance of stability to Syria and the wider region on terms that Moscow can live with. Furthermore, he has an array of economic and political reasons to weaken the American-led campaign to isolate and undermine him.

–Moscow and Washington are in direct talks to resolve the humanitarian crisis in Aleppo, Syria, according to Russian Defense Minister Sergei Shoigu.

“We are in a very active phase of talks with our American counterparts both in Geneva and in Amman; we are frequently in touch with Washington,” Shoigu declared on Monday (Rossiya 24). “We are moving step by step closer to a plan – and I’m only talking about Aleppo here – that would really allow us to start fighting together to bring peace so that people can return to their homes in this troubled land.”

Shoigu explained that “all of the suggestions are aimed at preserving the country’s territorial integrity and fighting terrorism.”

What can we expect in the way of a response from Washington? Obama and the administration that he nominally heads have been trying to square circles in Syria – as discussed above. In this cause, they repeatedly have tried to marginalize (if not eliminate) the Russia factor since Moscow keeps doing and saying things that highlight the contradictions in Washington’s actions.

Secretary of State John Kerry’s ploys over the past few months have aimed at doing this by trapping the Russians in phony cease-fires, the rebranding of Al Nusra & Associates, and related maneuvers. This strategy has had a few tactical successes but seems to have reached the end of the road after the latest fiasco of the “war party” led by Secretary of Defense Carter pulling the rug out from under the Oslo-dreaming Kerry.

Now, it’s Putin’s turn to try cornering the Americans. In effect, the Shoigu message is saying: if you are really concerned about the humanitarian situation in Aleppo, if you really are dedicated to achieving “Syria for the Syrians,” if you really want to crush the terrorist groups – then, we’re prepared to help you militarily, politically inside Syria and diplomatically by doing “X & Y & Z.”

One suspects that the expectation in Moscow is that this will go nowhere. But were Obama to bestir himself to seek a genuine resolution of some sort in the interests of his famous “legacy,” Putin would be glad to cooperate.

What Obama et al have been demanding is tantamount to suicide for the Assad regime, humiliation for Russian, and a strategic defeat for Iran. So, this time it is Obama who will have to climb down from the untenable positions he’s taken.

Does he have the courage and conviction to do that in the next five months? Nothing in his record or character suggests that he does.