“Yes, as we are all too aware, Hillary Clinton was officially anointed this week as the Democratic Party’s presidential nominee for the upcoming election. She was chosen by the party to be its nominee long before the race ever began, and it used every means at its disposal, both in plain sight and behind closed doors, to ensure that nothing – least of all the will of the people – would prevent that from happening.”

So wrote an American commentator in respect to the U.S. Establishment’s determination that the political status quo shall be preserved, come what may. What has this to do with the Middle East? Well, in a similar vein, and again avoiding public debate, two establishment “heavy-hitters” have just pulled the plug on President Obama’s (and Kerry’s) crab-like, sideways scuffle towards winding down the “new” Cold War through, ostensibly, teasing out some sort of co-operation with Russia in Syria.

Co-operation with Russia in Syria, the establishment fears, should not be allowed to become some pilot project for subsequent co-operation that could ease tensions with Russia in other areas – such as Ukraine and the Baltic Republics.

At the Aspen Security Forum last Friday, CIA Chief John Brennan said: “we need to have some sense that Assad is on the way out. There can be a transition; but it needs to be clear that he is not part of Syria’s future. Until that happens – until that begins; until there is acknowledgement of that transition – we are going to have Syrians dying: continuing to die.”

And last Monday, Defense Secretary Ash Carter, speaking about the outcome of Kerry’s marathon discussions with President Putin in Moscow – that reportedly had tentatively agreed to set up a joint operational control room in Jordan, staffed by both Russian and American officers for the purpose of combating ISIS – commented:

“We had hoped that [Kerry’s talks in Moscow] would promote a political solution and transition to put an end to the civil war, which is the beginning of all this violence in Syria, and then combat extremists rather than moderate opposition, which has to be part of that transition,” Carter said at a Pentagon news conference with Gen. Joseph Dunford, chairman of the Joint Chiefs of Staff. “So they’re a long way from doing that.”

When a reporter told Carter that he sounded unenthusiastic about the Kerry effort, Carter said, “No, I’m very enthusiastic about the idea of the Russians getting on side and doing the right thing. And I think that would be a good thing if they did. I think we’re a ways from getting that frame of mind in Russia. But that’s what Secretary Kerry is working toward.”

This latter response led John Batchelor of The Nation to conclude: “What kind of ‘no’ does Kerry not understand?  That’s a complete slamming of the door in his face.” 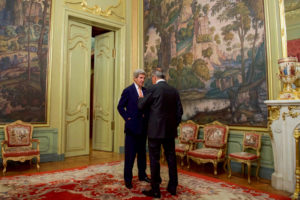 Well, of course it was. But it was also an intentional slamming of the door in the face of Obama. The entire basis of Kerry’s (and Obama’s) understandings with Sergey Lavrov and President Putin hinged on the agreement to lay aside the issue of President Assad’s future, whilst focussing on combating (the now re-branded) al-Nusra and ISIS forces.

This has been the nature of discussions since the beginning of the year: nothing new here to suddenly fan Brennan and Carter’s embers into flame. To condition co-operation on the Russians “getting on side, and doing the right thing”: i.e. to demand that the U.S. calls all the shots (including in respect to President Assad’s ouster from power), of course torpedoes any understanding with Moscow that Kerry might be working towards.

On the other hand – and contrary to what John Batchelor suggests – perhaps Kerry precisely understands Carter’s and Brennan’s game: Kerry’s plan, it seems, has been all along to engage Moscow on the diplomatic track, and to keep the focus on ceasefires – thus buying time – whilst Carter and Brennan used the respite gained to give space for the re-arming and reenergising their insurgent forces fighting the Syrian government.

Kerry knew full well that the U.S. had pushed some 3,000 tons of weapons to the insurgent forces after the February ceasefire had begun. Kerry had tried to explain it subsequently to the Russians as an awkward administrative difficulty, ensuing from a terminating support program…

One respected commentator on Syria’s military events (blogger Moon of Alabama) has written: “the Russian General Staff has warned since April that al-Qaeda in Syria (aka Jabhat al-Nusra aka Fateh al Sham) and the various attached Jihadi groups were planning a large scale attack on Aleppo. An al-Qaeda commander confirmed such long term planning in a pep-talk to his fighters before the current attack.”

“This shines a new light on the protracted talks Secretary of State Kerry has had for months with his Russian colleague. The U.S. tried to exempt al-Qaeda from Russian and Syrian attacks, even as UN Security Council Resolutions demanded that al-Qaeda and ISIS areas be eradicated. Then the U.S. tried to make an ‘offer’ to Russia to collectively fight al-Qaeda should Russia put its own and Syrian forces under U.S. control.

“We called this offer deceptive nonsense. All this, it now seems, was delaying talk to allow al-Qaeda to prepare for the now launched attack [i.e. on Syrian and allied forces acting to lift the insurgent siege on that part of Aleppo, which has been under jihadist control]”, notes Moon of Alabama.

In any event, Kerry’s long protracted negotiations with the Russians – whether or not motivated mainly from a desire to win respite for American proxies, in the wake of Russian military intervention – has served to lift pressure on Obama from those U.S. “hawks” pressing for direct U.S. attacks on the Syrian State, and its President – in order to weaken the state, or bring about its implosion.

And here is the point: the Russians consciously went along with this American dual tactic (at some cost to their relations with allies), whilst continuously wearing down American (and European) objections to a major military operation, intended to relieve Aleppo from the jihadists — and to secure the city.

The reincorporation of Aleppo fully into the Syrian State will represent a major strategic shift. It seems that the government is succeeding – with substantial air support from Russia. Jihadists losses are heavy.

So what is this “hue and cry” from Brennan and Carter reviving the earlier “Assad must go” meme (together with a tear-jerking, “we are going to have Syrians dying … continuing to die, because he, Assad, hasn’t gone”), just at the moment when the demand for Assad’s removal has never seemed less credible – if it ever was?

That last question (what’s it all about), takes us back to the start-point: the determination by the Establishment (both Democratic and Republican) to preserve the status quo – “by all means at its disposal.” It clearly intends, too, by all means at its disposal, to maintain the foreign policy status quo, as well. Some of the Republican leaders endorse this proposition, even to the extent of being willing to put partisan politics aside, and support a Democratic candidate.

The outburst about Syria from the CIA and DOD leaders quoted above is in fact about more than just Syria. It is all part with the attempt to brand Trump as “Putin’s Puppet,” as the “Kremlin’s candidate,” and as a “de facto agent” (amongst other jibes).

Some powerful figures clearly want any winding down of this “new” Cold War dead in its tracks. Trump’s questioning of the hostilities with Russia, of the purpose of NATO, and of the costs to the U.S. of it being a global hegemon have turned them cold.

Does he (Trump) not understand, (these “ancien regime” figures seem to say,) that rapprochement and entente with Putin now, could bring the whole structure tumbling down? It could collapse America’s entire foreign policy? Without a clear Russian “threat” (the “threat” being now a constant refrain in the U.S. Beltway), what meaning has NATO? And without NATO, why should Europe stay “on side, and [do] the right thing?” And if Damascus, Moscow and Tehran succeed in emerging with political credit and esteem from the Syria conflict, what price then for the U.S,-led “rules-based” global order?

Especially, if those who reject it, and who opt to stay out of the globalized order, find that they can so do – and emerge empowered and with their influence enhanced? If the political “rules-based order” does erode, what then will be the future for the inter-connected, and presently shaky, U.S.-led, global financial order and governance?

More Syrians are going to have to die, not because President Assad has not been ousted, but because the U.S. Establishment wants to keep the Syria war going until (they hope) Hillary takes office – and they will do whatever they can, precisely to make sure she does – and that the options to maintain America’s traditional foreign policy the way it is are not foreclosed to her on taking office.

The unsubstantiated attempt – coming from the top – to suggest that Putin’s aim is to undermine the West, and that Trump is to be Putin’s “tool” in this endeavour, is not some whimsical campaign gig — it is deadly serious. And it is very dangerous. There are few willing to say so, for fear of being labelled Putin’s “useful idiots,” too.

Russia will be making its own calculations, but it would not be a surprise, were we to hear that they are battening down the hatches, and readying for a more severe Cold War — or even a hot one.

Alastair Crooke is a former British diplomat who was a senior figure in British intelligence and in European Union diplomacy. He is the founder and director of the Conflicts Forum, which advocates for engagement between political Islam and the West.