The Nusra Front’s adoption of the new name Jabhat Fateh al-Sham and claim that it has separated itself from Al Qaeda was designed to influence U.S. policy, not to make the group any more independent of Al Qaeda.

The objective of the maneuver was to head off U.S.-Russian military cooperation against the jihadist group, renamed last week, based at least in part on the hope that the U.S. bureaucratic and political elite, who are lining up against a new U.S.-Russian agreement, may block or reverse the Obama administration’s intention to target Al Qaeda’s franchise in Syria. 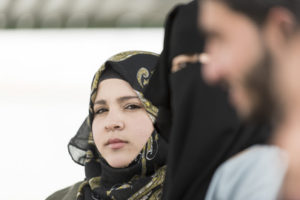 Syrian refugees await the arrival of Secretary-General Ban Ki-moon during his visit to the Zaatari Refugee Camp, located near Mafraq, Jordan. The settlement has grown to house nearly 80,000 Syrian refugees since it opened in 2012. March 27, 2016. (Photo from the United Nations)

But to anyone who has followed the politics of Nusra Front’s role in the Syrian war, the idea that Zawahiri would actually allow its Syrian franchise to cut loose from the central leadership and function with full independence is obviously part of a political sham.

Charles Lister, the British expert on Syrian jihadism who is now a fellow at the Middle East Institute in Washington, observed in May that Al Qaeda’s senior leadership has acquired a huge political stake in Nusra Front’s success in dominating the war against the Assad regime, which it views as the jewel in the crown of its global operation, along with Al Qaeda in the Arabian Peninsula (AQAP), the group’s Yemeni franchise.

This was not the first time that the issue of possible independence from Al Qaeda had come up in the context of the international politics of the Syrian conflict. A year ago last spring, Turkey, Qatar and Saudi Arabia, the external sponsors of the Nusra Front-dominated military command that had taken over Idlib in April 2015, were concerned about the possibility that the Obama administration would come down hard against their Nusra-based strategy.

Qatari intelligence reportedly met several times with Golani and offered substantial direct funding in return for a formal move to renounce his loyalty to Al Qaeda. Influential figures in Washington were being told by Nusra’s external supporters in May 2015 that an important faction of Nusra Front was likely to split from Al Qaeda. That never happened, of course, and Golani himself repeated his allegiance to Al Qaeda in his first on-camera interview with Al Jazeera in June 2015.

Golani’s loyalty is now a core interest of Al Qaeda. The Nusra Front’s success in northwest Syria, and in Idlib governorate in particular, has given Al Qaeda its first opportunity to have its own sovereign state. (The so-called “Islamic State” made a clean break from Al Qaeda in 2014.)

Al Qaeda’s hopes for its Syrian franchise were so high last spring that Nusra Front began to make the first preparations for its transformation into an “emirate.” It began holding consultations with other jihadist groups in Syria as well as clerics that the leadership believed would be sympathetic to the idea of the first Islamic state based on Al Qaeda’s ideological outlook.

Al Qaeda’s ambition for its Syrian affiliate also explains why a number of senior Al Qaeda figures have moved to Syria over the past three years — and especially after taking control of Idlib – according to Lister.  The stakes for Zawahiri and his colleagues at Al Qaeda central transcend Syria, moreover. The project for an Al Qaeda emirate is vital to counter the attraction that Islamic State has exerted at the expense of Al Qaeda since the 2014 break.

So despite Zawahiri’s ostensible magnanimity in giving his blessing to the independence of his group’s Syrian affiliate, and the soothing reassurance of such independence from the new spokesman for the organization, there is no way Al Qaeda could actually allow such independence.

In the newly renamed “Jabhat Fateh al Sham,” the term “Sham” refers to the entire area that includes Syria, Palestine, Lebanon and Jordan. But the entire rebranding involved is also a “sham,” in the sense of something that is bogus being presented as real.

The real reason for the rebranding and creation of a supposedly independent organization was the threat of a U.S.-Russian joint air campaign against Nusra Front. Golani himself provided a very strong hint that it was the primary consideration, declaring that it was intended to take away the excuse used by the U.S. and Russia to “bombard and displace Muslims … under the pretence of targeting Jabhat al-Nusra”.

Before word of negotiations over such military cooperation between the two powers surfaced in June, Nusra Front had resumed preparations for the eventual announcement of an emirate in Idlib, as Lister had reported based on his own jihadist and Salafist contacts.

But a shift in U.S. policy to all-out air war against Nusra Front would be nothing short of a calamity for the jihadist organization. The Obama administration, which has regarded Nusra Front as a terrorist organization from the beginning, had nevertheless effectively provided a partial shield for Nusra Front fighters under the partial ceasefire agreement.

Although Nusra was formally exempted from the scope of the agreement, Secretary of State John Kerry had reached an understanding with Russian Foreign Minister Sergey Lavrov in February that Russian planes would avoid hitting Nusra targets until the U.S.-supported “legitimate” armed opposition had been given a chance to separate themselves from Nusra physically and in terms of joint command structures.

That separation never happened, and several armed opposition groups that had been given status as part of the Syrian political negotiations joined with Nusra in a major offensive that essentially brought the ceasefire to an end. Even then, however, the Obama administration continued to press the Russians to avoid bombing that could hit civilians and armed opposition groups, which it said were “commingled” with Nusra.

From Target to Asset

So it was obviously a blow to Nusra hopes when the U.S.-Russian negotiations on a joint military effort against the group were revealed. But the deal still has not been completed, and Nusra Front leaders knew from the Washington Post that Pentagon and CIA officials were strongly opposed to U.S. cooperation with Russia in Syria against their group. They knew the argument against such an agreement was that it would play into the hands of the Russians and their Syrian client by weakening the main source of military pressure on Assad. 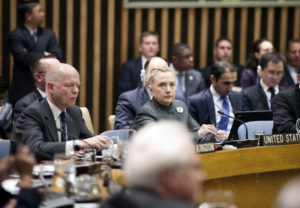 In fact, most of the news media, think tank specialists on the Middle East, and the Democratic Party political elite aligned with Hillary Clinton now lean toward treating Al Qaeda’s Syrian affiliate as a strategic asset rather than a security threat.

Even Lister has called the Nusra Front a greater long-term threat than Islamic State. But he was quoted as saying that the rebranding “puts the U.S. and Russia in a tricky situation,” meaning that it would now be harder to justify air strikes against the newly renamed organization.

Golani and his colleagues understandably hoped that their foreign tactical allies against Russian-U.S. cooperation in Syria would try to exploit the rebranding operation to shoot down the agreement for joint air operations against them.

The Obama administration has said clearly that the rebranding ploy will not change its policy toward the jihadist organization, but now Golani and his foreign supporters are undoubtedly hoping for a new approach in a Hillary Clinton administration.

Gareth Porter is an independent investigative journalist and winner of the 2012 Gellhorn Prize for journalism. He is the author of the newly published Manufactured Crisis: The Untold Story of the Iran Nuclear Scare. [This article first appeared at Middle East Eye.]