As the West’s elites growl about “Russian aggression” – as they once did about Iraq’s WMD – NATO leaders meet in Poland to plan a costly and dangerous new Cold War, while shunning the few voices of dissent, John V. Walsh warns.

German Foreign Minister Frank-Walter Steinmeier’s cry of distress is that of a man watching a tidal wave of destruction gathering force, similar to ones that have engulfed his country twice in the Twentieth Century.

Commenting on NATO’s recent military exercises in Poland and the Baltics, Steinmeier said, “What we shouldn’t do now is inflame the situation further through saber-rattling and warmongering. … Whoever believes that a symbolic tank parade on the alliance’s eastern border will bring security is mistaken. … We are well-advised to not create pretexts to renew an old confrontation. .. [It would be] fatal to search only for military solutions and a policy of deterrence.”

His dread is not to be dismissed since it comes from a man who is in a position to know what the U.S. is up to. His words reflect the fears of ever more people across all of Eurasia from France in the West to Japan in the East.

Under the euphemism of “containment,” the U.S. is relentlessly advancing its new Cold War on Russia and China. Its instrument in the West is NATO and in the East, Japan and whatever other worthies can be sharked up.

It is a Cold War that grows increasingly hotter, with proxy wars now raging in eastern Ukraine and Syria and with confrontations in the South China Sea. There is an ever growing likelihood that these points of tension will flare up into an all out military conflict.

In the West, this wider conflict could begin in Eastern Europe and Russia, but it would not stop there. All the European NATO countries would be on the front lines. In the East, the conflict would take place in the Western Pacific in the region of China’s coast and in the peninsulas and island countries in the region, including Japan, the Philippines and Indochina.

In each case, the U.S. would be an ocean away, “leading from behind,” as Barack Obama’s staff might put it, or engaged in “offshore balancing” as some foreign policy “experts” might term it.

Assuming that the conflict would stay “conventional” – i.e. non-nuclear – the devastation might be confined to Eurasia, from France in the West to Japan in the East. In that case, no matter which side prevails, the U.S. could escape unscathed and “win” in that sense. But Eurasian nations would lose in what could be World War II redux.

One can get a sense of what this would mean in the case of economic conflict by looking at the minimal economic warfare now being waged on Russia in the form of sanctions. Those sanctions are hurting both Russia and the rest of Europe. The U.S. is untouched.

The same is also true for military conflict. Want to know what it would look like? Look at eastern Ukraine. All of Eurasia could come to resemble that sorry nation in the event of a military conflict pitting the U.S. and its allies against Russia and China. Eurasia, be forewarned!

The goal of the U.S. foreign policy elite would clearly be for Russia and China to “lose,” but even if they “won,” they would be brought low, leaving the U.S. as the world’s greatest economic and military power as it was in 1945.

Europe is beginning to awaken to this. We have Steinmeier’s plea. But it is not only Germany that is worried. The French Senate wants an end to the sanctions imposed on Russia. Business people in many Western European countries, most notably in Germany and Italy, European farmers who export to Russia and tourist entrepreneurs like those in Turkey and Bulgaria also want an end to sanctions and military exercises. 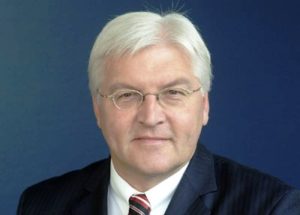 Parties of the Right want an end to domination by NATO and Brussels, both controlled by the U.S. The Brexit is just one rumbling of such discontent.

All these nations are growing increasingly aware of the fate that awaits them if overt conflict erupts with Russia. The people of Germany want none of it. Likewise the people of Japan are stirring against the U.S. effort to goad Japan into fighting China. All remember the devastation of WWII.

Let’s recall the casualty figures, i.e., deaths, among the principal combatants of WWII:

And for a few other countries which “got in the way” of the major adversaries:

One wonders what the leaders of Poland or the Philippines or some elements in Vietnam are thinking when they take a belligerent attitude to Russia or China in order to please the U.S.

The even more alarming problem with this U.S. strategy is that it could easily spill over into a nuclear conflict as nearly happened in the Cuban Missile Crisis. Then the U.S. too would be reduced to radioactive rubble. The bet of the Western policy elite must be that Russia and China would not respond to a conventional war with a nuclear strike.

However Vladimir Putin has made it clear that in any war with the West, the U.S. will feel the impact at once. The neocons and the rest of the U.S. foreign policy elite must be betting that Putin can do nothing, because he would not use nuclear weapons. So the destruction would be confined to Europe and Asia.

But that assumption is a dangerous one. Even if nuclear weapons are not used. Russia and China might respond with a conventional weapons attack on U.S. cities. In WWII, Germany was able to wreak considerable devastation using conventional bombs on England delivered by airplanes and V2 rockets.

Similarly the U.S. was able to do enormous damage to Germany and to Japan with conventional weapons, especially fire-bombing as in Tokyo and Dresden. Today technology has advanced greatly (bringing previously “safe” targets with range of missile and bomber attack), and U.S. cities have nuclear power plants nearby.

What is the likely outcome of a conventional war waged against U.S. cities? Do we wish to find out? And once it begins where is the firewall against an all-out nuclear exchange? Where are the neocons and the rest of the U.S. foreign policy elite taking us?

Certainly the damage would begin with Eurasia, but Americans would do well to worry that great swarms of chickens might come home to roost in New York, Chicago and Los Angeles. This is no longer the Twentieth Century.

For some the scenarios above might seem unduly alarmist. You might doubt that the U.S. elite would be capable of consciously unleashing such a vast bloodletting. For those, it is useful to recall the words of President Harry S. Truman, who said in 1941, when he was still a Senator and before the U.S. had entered WWII: “If we see that Germany is winning the war, we ought to help Russia; and if that Russia is winning, we ought to help Germany, and in that way let them kill as many as possible. . . .”

Is that not what happened? People of Eurasia, beware.

John V. Walsh can be reached at John.Endwar@gmail.com . He writes for Antiwar.com, Consortium News, CounterPunch, DissidentVoice, International Clearing House, Lew Rockwell.com, RT and other outlets where antiwar voices are to be heard. Some of his work has been translated into Chinese and published in the mainland Chinese press. [A version of this article originally appeared on RT here.]

← Gaza: Living and Dying with Drones
A New Fight Over Syria War Strategy →

34 comments for “NATO Marches Toward Destruction”