While U.S. political leaders claim to uphold universal human rights, nearly all are selective in sympathizing with Israel in its lopsided war against the Palestinians as reflected in the 2014 slaughter in Gaza, recalls Ann Wright.

Two years ago, on July 7, 2014, the Israeli government launched a horrific 51-day air, land and sea attack on the people of Gaza. Israeli Defense Forces (IDF) fired missiles, rockets, artillery and tank shells relentlessly on 1.8 million Palestinians squashed by Israeli land and sea blockades into a narrow strip 25 miles long and 5 miles wide, one of the most densely populated places in the world.

Of the 2,219 or so Palestinians killed (estimates vary), some 1,545 were civilians and nearly 500 of them were slaughtered by Israeli assassin drones, a style of warfare that has become the norm for both the United States and Israel. Drones fly above Gaza 24 hours a day watching the movements of every Palestinian and ready to fire rockets at those chosen to die by the Israeli Defense Force and its political masters.

In the 2014 Israeli attack on Gaza, the Al Mezan Center for Human Rights documents 497 Palestinian civilians killed by drones. At the end of the 51 days, besides the 2,219 overall death toll, 1,545 were civilians, including 556 children. Among the 10,600 or so wounded were 2,647 children, according to the Mezan Center.

There was devastation, too, to Gaza’s infrastructure. The Mezan Center listed 8,381 houses destroyed and more than 23,000 damaged. The devastation extended to schools (138 damaged or destroyed) and hospitals and health facilities (26 damaged). According to the United Nations Office for the Coordination of Humanitarian Affairs (OCHA), over 273,000 Palestinians in the Gaza Strip had been displaced of whom 236,375 (over 11 percent of the Gazan population) were taking shelter in 88 United Nations schools.

On the other side, Palestinian militias shot homemade rockets killing 66 Israeli soldiers, five Israeli civilians, including one child, and one Thai citizen in Israel.

The 51-day Israeli attack on Gaza should not be characterized as a war between opposing forces but rather as a massive one-sided attack on Palestinians made at the choosing of Israel with its overwhelming military air, sea and land forces backed up with endless military supplies and equipment from the United States, including the missile system called the “Iron Dome.”

Now two years after the Israeli attack on Gaza, the tensions in the West Bank are exploding. Beginning in October 2015, a few West Bank Palestinian youth have forsaken non-violent confrontation with Israeli military and have taken up knives instead of rocks in the latest intifada against Israeli occupation and oppression, against the continued building of illegal settlements on Palestinian lands and against the imprisonment of hundreds of Palestinian youth.

The use of knives against IDF soldiers has expanded to deaths of Israeli civilians as well, including a 13-year-old girl in her home. Thirty-four Israelis, two U.S. citizens, an Eritrean and a Sudanese have been killed in the knife, gun or car ramming attacks. Meanwhile, 214 Palestinians have been killed by IDF soldiers during this period.

The potential for Israeli response/revenge to these knife attacks is great and would probably not be directed to just the West Bank but also toward Gaza.

As with other conflicts, the stories of death and of survival of civilians trapped in merciless bombings and fighting should compel leaders to work to end conflicts, but seldom do.

A new book, published on July 5, chronicles the 2014 IDF attack on Gaza and focuses on the psychological and physical destruction suffered by the people of Gaza by one particular weapon system — the assassin drone that killed 497 civilians during the 2014 attack. 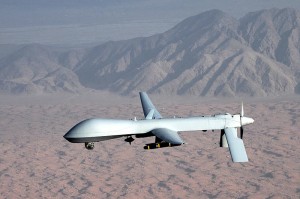 Palestinian writer Atef Abu Saif recounts the day-by-day life of a family and a community under fire from an enemy in the sky, beginning on July 7, 2014. The book entitled Drone Eats With Me — A Gaza Diary is a graphic description of life under fire and particularly with the assassin drone lurking in the sky 24 hours a day waiting for its next victim.

After the drone crosses off another victim, “the noise of this new explosion subsides it’s replaced by the inevitable whir of a drone, sounding so close it could be right beside us. It’s like it wants to join us for the evening and has pulled up an invisible chair.”

Atef describes his life during the 51-day attack: “Our fates are all in the hands of a drone operator in a military base somewhere just over the Israeli border. The operator looks at Gaza the way an unruly boy looks at the screen of a video game. He presses a button and might destroy an entire street. He might decide to terminate the life of someone walking along the pavement, or he might uproot a tree in an orchard that hasn’t yet borne fruit. The operator practices his aim at his own discretion, energized by the trust and power that has been put in his hands by his superiors.”

Atef says many entities known and unknown join his family at mealtime: “The food is ready. I wake the children and bring them in. We all sit around five dishes: white cheese, hummus, orange jam, yellow cheese, and olives.

“Darkness eats with us.

“Fear and anxiety eat with us.

“The unknown eats with us.

“The drone, and its operator somewhere out in Israel, eats with us.

“Our hands shiver, our eyes stare at the plates on the floor.”

Ann Wright served 29 years in the US Army and retired as a Colonel.  She also served as a US diplomat for 16 years and resigned in March 2003 in opposition to President Bush’s war on Iraq.  She is a coordinator for the US campaign for the Women’s Boat to Gaza. She is the co-author of Dissent: Voices of Conscience.

8 comments for “Gaza: Living and Dying with Drones”