Exclusive: The floundering inquiry into who shot down Malaysia Airlines Flight 17 in 2014 has relied heavily on a Ukrainian intelligence agency that recently stopped U.N. investigators from probing its alleged role in torture, reports Robert Parry.

The Ukrainian intelligence service that has been guiding the investigation of the Malaysia Airlines Flight 17 shoot-down of July 2014 recently blocked a United Nations inquiry into alleged torture sites under Ukrainian government control.

“The United Nations Subcommittee on Prevention of Torture (SPT) has suspended its visit to Ukraine after being denied access to places in several parts of the country where it suspects people are being deprived of their liberty by the Security Service of Ukraine, the SBU,” a U.N. statement said, with Sir Malcolm Evans, head of the four-member delegation, adding:

“This denial of access is in breach of Ukraine’s obligations as a State party to the Optional Protocol to the Convention against Torture. It has meant that we have not been able to visit some places where we have heard numerous and serious allegations that people have been detained and where torture or ill-treatment may have occurred.”

SBU director Vasyl Hrytsak said the reason for barring the U.N. team was to protect Ukrainian government secrets, adding: “If you arrive, for example, in the United States and ask to come to the C.I.A. or the F.B.I., to visit a basement or an office, do you think they will ever let you do it?”

But the relevance of this SBU secrecy to the MH-17 case, in which the airliner carrying 298 people was shot down over eastern Ukraine on July 17, 2014, is that the SBU is an integral part of the Dutch-led multinational Joint Investigation Team that is trying to determine who was responsible for the attack.

The obstruction of the torture inquiry suggests that the SBU also would steer the JIT away from any evidence that might implicate a unit of the Ukrainian military in the shoot-down, a situation that would be regarded as a state secret which could severely undermine international support for the U.S.-backed regime in Kiev. Among the SBU’s official duties is the protection of Ukrainian government secrets.

Earlier this month, the JIT investigators published a breezy, notebook-style report on their progress, revealing how dependent they have become on information provided by the SBU and how they have grown to trust the Ukrainian intelligence service.

According to the report, the SBU helped shape the MH-17 investigation by supplying a selection of phone intercepts and other material. But the JIT seemed oblivious to the potentially grave conflict of interest, saying:

“Since the first week of September 2014, investigating officers from The Netherlands and Australia have worked here [in Kiev]. They work in close cooperation here with the Security and Investigation Service of the Ukraine (SBU). Immediately after the crash, the SBU provided access to large numbers of tapped telephone conversations and other data. …

“At first rather formal, cooperation with the SBU became more and more flexible. ‘In particular because of the data analysis, we were able to prove our added value’, says [Dutch police official Gert] Van Doorn. ‘Since then, we notice in all kinds of ways that they deal with us in an open way. They share their questions with us and think along as much as they can.’”

The JIT report continued: “With the tapped telephone conversations from SBU, there are millions of printed lines with metadata, for example, about the cell tower used, the duration of the call and the corresponding telephone numbers. The investigating officers sort out this data and connect it to validate the reliability of the material.

“When, for example, person A calls person B, it must be possible to also find this conversation on the line from person B to person A. When somebody mentions a location, that should also correlate with the cell tower location that picked up the signal. If these cross-checks do not tally, then further research is necessary.

“By now, the investigators are certain about the reliability of the material. ‘After intensive investigation, the material seems to be very sound’, says Van Doorn, ‘that also contributed to the mutual trust.’”

But would SBU turn over data that might reveal the role of a Ukrainian military unit in the shoot-down? Under the security agency’s secrecy mandate, could it even do so?

Further, the collegial dependence on the SBU has not led to a quick resolution of the MH-17 mystery, with the JIT’s investigative report now not expected until after the summer, i.e., more than two years after the shoot-down, and even then the report is to be kept secret.

In this month’s update, the JIT would not even endorse last fall’s finding by the Dutch Safety Board that MH-17 was likely brought down by a Buk anti-aircraft missile system fired somewhere in a 320-square-kilometer area in eastern Ukraine, territory that was then partly controlled by the rebels and partly by the government.

Nor does the JIT update address last October’s findings of Dutch (i.e., NATO) intelligence that the only operational anti-aircraft missile batteries capable of bringing down a plane at 33,000 feet on July 17, 2014, were in the possession of the Ukrainian military.

“For the investigation into the weapon system that was used, the well known seven questions need to be answered are: who, what, where, when, which, how and why,” the update said. “In this investigation only the question of ‘when’ has been established irrefutably: flight MH17 crashed on 17 July 2014. The remaining questions require intensive investigation, according to Gerrit Thiry (team leader) and Susanne Huiberts (operational specialist) of the National Criminal Investigation Service.”

The MH-17 case also has relevance to the decision later this month by the European Union on whether to extend sanctions against Russia for another six months as the U.S. government wants. The E.U. imposed the sanctions amid a frenzied rush-to-judgment in late July 2014 blaming the Russians and the rebels for the deaths of the 298 people on MH-17 flying from Amsterdam to Kuala Lumpur. 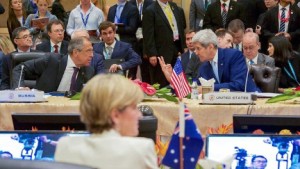 Immediately after the shoot-down, the U.S. government sought to pin the blame on ethnic Russian rebels in eastern Ukraine and their Russian government backers. However, after CIA analysts had time to evaluate U.S. satellite, electronic and other intelligence data, the U.S. government went curiously silent about what it had discovered, including the possible identity of the people who were responsible. The U.S. reticence, after the initial haste to blame Russia, suggested that the more detailed findings undercut the original claims.

A source who was briefed by U.S. intelligence analysts told me that the CIA’s conclusion pointed toward a rogue Ukrainian operation involving a hard-line oligarch with the possible motive of shooting down Russian President Vladimir Putin’s official plane returning from South America that day, with similar markings as MH-17. The source said a Ukrainian warplane ascertained that the plane was not Putin’s but the attack went ahead anyway, with the assumption that the tragedy would be blamed on the pro-Russian rebels or on Russia directly.

Although Ukraine would have been an obvious suspect in the attack, the Ukrainian SBU was invited to play a key role in the investigation along with investigators from Australia and the Netherlands. Under the JIT agreement, participating governments, which also include Belgium and Malaysia, have the right to block the release of information to the public.

The recent JIT report hails the comradeship between the Australian and Dutch investigators and their Ukrainian hosts, despite some early difficulties.

“An incredible amount of research material; differing legal systems and initial unfamiliarity with each other. Despite this, both Australian and Dutch members working in the Field Office in Kiev have managed to build good relations with each other and with the Ukraine to effectively conduct the investigation into the MH17 crash,” the report said.

“They are professionals who recognize each other’s love for the police work. They understand each other’s circumstances. And they are, regardless of their country of origin, motivated to do their utmost to uncover the truth. …

“‘The thing is to see how you can keep it workable”, says Van Doorn, ‘we like practical solutions. That means ‘poldering’ [the Dutch practice of policy-making by consensus].’”

Yet, the idea of “poldering” – or reaching consensus – with Ukraine’s SBU, an agency that has just thwarted a United Nations investigation into allegations that the SBU engages in the torture of ethnic Russian rebels, raises further questions about the objectivity and reliability of the MH-17 probe.

[For more background on this controversy, see Consortiumnews.com’s “More Game-Playing on MH-17.”]