As the U.S. election shapes up as a battle between Donald Trump and Hillary Clinton, the prospect for the public hearing anything approaching a truthful exchange of ideas appears hopeless, writes David Marks.

In 1958, a quarter century after publishing Brave New World, Aldous Huxley wrote a reflective essay on the themes of his book that ring with prescient truth. His analysis delves into the rise of deceptive candidates who prioritize personal interests over supporting democracy.

Huxley wrote: “From a pulpit or a platform even the most conscientious of speakers finds it very difficult to tell the whole truth. The methods now being used to merchandise the political candidate as though he were a deodorant positively guarantee the electorate against ever hearing the truth about anything.” 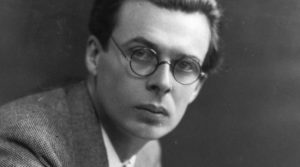 Huxley’s words precisely describe the techniques used in the current presidential campaign. The core issue is the motivation behind the candidates’ words.

Hillary Clinton promotes herself as the first female presidential candidate without embracing the pacifist foundations of feminism. She has supported many of the aggressive military actions of the United States in recent years. Her use of liberal rhetoric belies her ties to military and corporate interests and membership in the American oligarchy. Clinton’s deceptive techniques in gaining popularity rely mostly on omission of truth. Except for a few grudging mistakes-were-made formulations, she admits to no faults.

Donald Trump brings distortion of truth to a new level. He is an iconic salesman, offering a magic potion that will cure all social and political ills. And in that tradition, he repeatedly assails the status quo, claiming to identify and empathize with the downtrodden and ignored. He intentionally attracts followers in hypnotic, pied-piper fashion, repeatedly asserting he will solve all their problems.

Trump drives this home by encouraging the disenchanted to project their discontent onto current leadership, rather than considering their own role in, or awareness of the dysfunctions in U.S. politics and economy. He offers no real solution to the individual except, “Vote for me.”

This subversive approach of spewing emotion while ignoring facts appeals to the darkest recesses of the human psyche and has become the norm in elections. In that sense, U.S. politics has reached a new low with the Trump candidacy. Very few of Trump’s supporters can delineate his policy or position; rather they cite his attack on the establishment or his “honesty” or “strength” as reason for allegiance. Trump’s act uses manipulative tactics aimed at stirring the unconscious forces of repressed discontent and frustration.

Trump repeatedly compliments himself on his own simple common sense values as his rhetoric fuels the hostile impulses of his followers. Trump’s intolerance and bullying are symptomatic of undisguised fascism.

Candidate Clinton relies on more subtle techniques. She promotes conventional wisdom and the false premise that the U.S. is the arbiter of democracy in the world to justify military intervention. She makes her case for use of force citing “strategic” interests, omitting the corporate and financial motives that are the foundation of her policies. While her arguments appear more logical than her opponent’s, they are no less deceptive.

Though candidate Trump criticizes Clinton’s penchant for “regime change,” he often suggests that forceful intervention or violence is a viable remedy in resolving international crises, stopping extremism, or punishing those who voice protest against him. This resonates with frustrated voters and encourages followers to act out personal anger against those who would doubt the supremacy of their leader. Trump’s arrogance and self-absorbed persona are catalysts for unchecked hostility both domestically and internationally.

In his essay of nearly 60 years ago, Huxley describes how propaganda is used to justify violence:

“Propaganda in favor of action dictated by the impulses that are below self-interest offers false, garbled or incomplete evidence, avoids logical argument and seeks to influence its victims by the mere repetition of catchwords, by the furious denunciation of foreign or domestic scapegoats, and by cunningly associating the lowest passions with the highest ideals, so that atrocities come to be perpetrated in the name of God and the most cynical kind of Realpolitik is treated as a matter of religious principle and patriotic duty.”

Huxley had observed the rise and fall of Nazi Germany and Stalinist Russia. His evaluation of the social psychology of U.S. politics did not shy away from the universal similarities in human behavior at its worst. That perspective is no less valid today. Both presidential candidates can be assailed for their use of propaganda with “incomplete evidence.”

Clinton’s appeal is to the status quo, supporting a United States where military expenditures represent the highest proportion of tax revenues, where interests of big business and banking come first, and where mass shootings are a cultural norm. She has an advantage because of her appeal to the majority of voters who cling to normalcy. Clinton attacks Trump as unpredictable and dangerous.

Trump counterattacks by portraying her as deviant, abnormal and criminal, “Crooked Hillary.” He also taps into the dissatisfaction with government and the reasonable belief that politicians have led the country astray, calling American leaders weak and incompetent in contrast to his supposed strength and skill.

He relies on a cult of personality and a searing indictment of current leadership to raise his status. Rather than appealing to factual data and proposing viable solutions, Trump is the supreme authoritarian targeting the unchecked emotional forces of those who are entranced by his bravado.

Trump is the voice of collective dissatisfaction, projecting and revealing one version of the American reality. He describes a political world that he also embodies: “Washington is broken, and our country is in serious trouble and total disarray. Very simple. Politicians are all talk, no action. They are all talk and no action. And it’s constant; it never ends.”

Trump gladly enters this disarray, the realm where he is most comfortable. His stream of consciousness oratory and narcissistic candidacy bring a new bizarre character to the stage in U.S. politics, yet his rise in popularity is the extension of a growing phenomenon. For decades presidential candidates have harvested the bounty from conflicted emotions and despair to gain votes. Their empty sales tactics are often forgotten when they are elected. (In 1988, even the supposedly responsible Republican George H.W. Bush exploited racism with the Willie Horton commercials and promised, “read my lips, no new taxes,” before raising taxes as President.)

Fear of Trump’s words and demeanor has prompted critics and rivals to show distain, but attacks on him are hurled back with vindictive force. He succeeds in deflecting criticism and bringing former enemies into his camp. We witness the potential rise of an unpredictable tyrant.

Trump initially flaunted his independent wealth, claiming immunity from the pressure of lobbyists. With this, he unwittingly confessed allegiance to personal economic interests and policies that also favor the wealthiest Americans. Many of these same power brokers come to his side as he becomes the likely Republican presidential candidate.

Now that he could be elected, Trump’s conflicted presentations of domestic and foreign policy have yet to alienate the politicians, millionaires and billionaires who join his campaign. The real list of priorities for them is short: little else matters but money and profits. Despite concerns about the personality and idiosyncrasies of their candidate, those who not long ago scorned the idea of a President Trump join an extremely dangerous bandwagon.

A billionaire with no leadership experience rises as the voice of the maligned and economically downtrodden. A candidate whose wealth is more telling than any of his stated positions has become the defender of those who suffer from an economy that overtly favors the richest individuals and corporations.

Beyond recognizing and criticizing his blustering racism and fascism, there is minimal challenge to Trump’s most ludicrous claim: to represent any other economic class than his own. Trump’s greatest vulnerability lies in his status as the super-rich candidate who dubiously presents himself as someone who will come to the aid of the economically challenged.

Allies of the Wealthy

Yet neither wealthy presidential contender – Trump nor Clinton – can be expected to do much that will discomfort the comfortable. While claiming to have altruistic motivations, they are inextricably tied to the forces that drive policies favoring profiteering over basic needs. The most costly impact of Trump’s candidacy to America’s economic elite will come when the public finally recognizes that the wealthiest Americans have gained vastly disproportional influence.

The founding principles and structure of the U.S. democracy rest on keeping power out of the hands of a small clique of people and their indiscriminate financially based decisions. An oligarch reaching for political office by any means confirms that the interests of an elite class are an entrenched priority.

Yet despite his crude emergence, Trump is not an anomaly. The rise of extreme nationalism in the face of economic crisis is a consequence of decades of corrupt domestic and international policies. The crisis that faces the United States is certainly exemplified by the rise of Donald Trump and would be seriously exacerbated by his presidency, but will not be resolved by his electoral defeat.

Huxley, as early as 1958, adds perspective to a continuing syndrome: “At this point we find ourselves confronted by a very disquieting question: Do we really wish to act upon our knowledge? Does a majority of the population think it worthwhile to take a good deal of trouble, in order to halt and, if possible, reverse the current drift toward totalitarian control of everything?

“In the United States of America is the prophetic image of the rest of the urban-industrial world as it will be a few years from now; recent public opinion polls have revealed that an actual majority of young people in their teens, the voters of tomorrow, have no faith in democratic institutions, see no objection to the censorship of unpopular ideas, do not believe that government of the people by the people is possible and would be perfectly content, if they can continue to live in the style to which the boom has accustomed them, to be ruled, from above, by an oligarchy of assorted experts.”

Trump, the self-absorbed snake-oil salesman, may self-destruct as quickly as he has risen; however we cannot dismiss the illness allowing his candidacy. Materialism cloaked as patriotism needs to be faced head on and not blamed on a single candidate.

Perhaps Hillary Clinton is more subtle about the forces she is tied to; and clearly has more political experience and a better understanding of the constitutional system. Yet whoever is elected president of the United States will be wed to the identical economic forces. The presidential election of 2016 will be remembered as when Americans were forced to realize that their power has been handed to the economic elite.

Huxley’s question becomes more relevant: “Do we really wish to act upon our knowledge?”

David Marks is a veteran documentary filmmaker and investigative reporter. His work includes films for the BBC and PBS Frontline, including “Nazi Gold,” on the role of Switzerland in WWII.