Shikha Dalmia, a fellow at the Koch brothers-funded think tank, the Reason Foundation, has castigated CATO’s Doug Bandow and The Nation’s Stephen F. Cohen for having the temerity to note that the Republican presidential nominee, Donald J. Trump, has raised several important foreign policy issues which need addressing, and soon.

Those questions include why the United States must play the role of world policeman, whether NATO’s mission is obsolete, why the U.S. always pursues “regime change” when the results – in Iraq, Libya, Ukraine, Syria, etc. – are a “disaster,” and why Russia has been made into an enemy.

Bandow has praised Trump’s independence from the “neoconservatives and militaristic interventionists who dominate the Republican Party,” while Cohen has argued that “Trump’s questions are fundamental and urgent, but instead of engaging them, his opponents (including President Obama) and the media dismiss the issues he raises about foreign policy as ignorant and dangerous.”

But Dalmia dismissed these “Trump-loving peaceniks” for “kidding themselves” because “above all, his militant protectionism will mean more war, not less.” In an article published in The Week on May 31, Dalmia maintained that Trump and those who see some refreshing thinking in his policy statements fail to appreciate the salubrious (and if Dalmia’s analysis is to be believed, perhaps even miraculous) effect free trade has had on international relations since the end of the Second World War.

The story, as told by Dalmia, is by-now familiar: World War II was brought about, in part, because European nations took refuge in mercantilist trade policies in the aftermath of the Great Depression. Today, it is virtually impossible imagining, say, France going to war with Germany. Why so?

According to Dalmia’s ahistoric piece of sophistry, prior to WWII “military conflict was practically de rigueur in Europe.” (It wasn’t. Between 1871- with the end of the Franco-Prussian war – and 1914 the peace was largely kept on the continent but for a brief Russian-Turkish war in 1877. But never mind.)

What caused this supposedly momentous change in the politics of the continent after World War II? Dalmia tell us that it wasn’t “NATO’s security guarantee” that “put an end to the great wars of dictators. Trade did. Indeed, the more countries trade and the more partners they trade with, the less likely they are to go to war.”

This is what is commonly known as the theory of economic interdependence which holds that high levels of trade between countries will inexorably result in global peace and stability. It is said that countries that trade with each other have less motive to fight one another and countries will avoid costly wars that only serve to undermine their mutually beneficially trade relations. 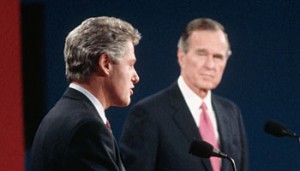 As Dalmia puts it: “trade doesn’t just eliminate reasons for war, it generates forces of peace: Attacking your trade partner means either destroying your buyers or your supplier or both. Trade gives each side a stake in the other’s well being.” This, she worries, is lost on Mr. Trump.

This kind of thinking, such as it is, was the regnant ideology in Bill Clinton’s Washington and was used with abandon to disguise aggressive geopolitical actions – such as the expansion of NATO eastwards – by couching them in the benevolent rhetoric of neo-liberalism.

In a West Point commencement address in 1997, Clinton claimed that “our security is tied to the stake other nations have in the prosperity of staying free and open and working with others.” NATO expansion would, according to Clinton’s Deputy Secretary of State Strobe Talbott, help to create a Europe “increasingly united by a shared commitment to open societies and open markets.”

From the vantage point of 2016, the increasingly authoritarian nature of the governments in Poland, Hungary and Estonia, to say nothing of the war in Ukraine, have put an end to these grand ambitions.

Yet, is there any compelling reason to give credence to Dalmia’s claim that “the more countries trade and the more partners they trade with, the less likely they are to go to war?” Not really.

To see why, lets examine the years leading up to the First World War. In The Economic Consequence of the Peace, John Maynard Keynes opens his account of the Versailles negotiations by describing the situation on the continent as it obtained during the mostly peaceful 45-year period from 1870-1914.

Trench warfare during World War I.

“What an extraordinary episode in the economic progress of man that age was which came to an end in August 1914!” he exclaimed.

What was taking place was nothing less than what the neo-imperialist economist and historian Niall Ferguson has called “the first age of globalization.”

Keynes tells us that before the war, an illusion of permanence held sway over the middle and upper European classes, indeed, “the projects and politics of militarism and imperialism, of racial and cultural rivalries … appeared to exercise almost no influence at all on the ordinary course of social and economic life, the internationalization of which was nearly complete in practice.” [emphasis mine]

Still more, according to Keynes, “the interference of frontiers and of tariffs was reduced to a minimum, and not far short of three hundred millions of people lived within the three Empires of Russia, Germany and AustriaHungary … over this great area there was an almost absolute security of property and of person.” Keynes observed that “the statistics of economic interdependence of Germany and her neighbors are overwhelming.”

Sounds like a free trader’s paradise, one which Dalima and the rest of Washington’s neoliberal cheerleaders would happily approve. And yet, by August 1914, the war came. Trade was no match for the toxic brew of nationalism and populism unleashed by an assassination in Sarajevo.

Nevertheless, while the idea that free trade paves the way for peaceful inter-state relations is wholly unsupported by the historical record, it remains oddly pervasive over a century after the commencement of the Great War. Even worse, it becomes the trusted panacea that prevents a critical examination of other foreign policy illusions that could be laying the groundwork for another war.

← Waiting for California and the FBI
The Bigger Nuclear Risk: Trump or Clinton? →

15 comments for “Trump, Trade and War”