Exclusive: If the U.S. election comes down to Hillary Clinton v. Donald Trump, the American people will have to decide between two candidates who could risk the future of the planet, albeit for very different reasons, writes Robert Parry.

Hillary Clinton made a strong case for why handing the nuclear codes over to a President Donald Trump would be a scary idea, but there may be equal or even greater reason to fear turning them over to her. In perhaps the most likely area where nuclear war could break out – along Russia’s borders – Clinton comes across as the more belligerent of the two.

In Clinton’s world view, President Vladimir Putin, who has been elected multiple times and has approval ratings around 80 percent, is nothing more than a “dictator” who is engaged in “aggression” that threatens NATO following the U.S.-backed “regime change” in Ukraine.

“Moscow has taken aggressive military action in Ukraine, right on NATO’s doorstep,” she declared. But stop for a second and think about what Clinton said: she sees Russia responding to an unconstitutional coup in Ukraine – which installed a virulently anti-Russian regime on Russia’s border – as Moscow acting aggressively “on NATO’s doorstep.”

That’s the same NATO, whose job it was to protect Western Europe from the Soviet Union, that — following the Soviet Union’s collapse — added country after country right up to Russia’s border. In other words, NATO muscled its way into Russia’s face and has announced plans to incorporate Ukraine as well, but when Russia reacts, it’s the one doing the provoking.

Clinton’s neoconservative interpretation of what’s happening in Eastern Europe is so upside-down and inside-out that it could ultimately become the flashpoint for a nuclear war between Russia and the West.

While she sees Russia as the “aggressor” against NATO, the Russians see NATO moving troops up to its borders and watch the deployment of anti-ballistic-missile systems in Romania and Poland, thus making a first-strike nuclear attack against Russia more feasible. Russia has made clear that it views these military deployments, just kilometers from major Russian cities, as an existential threat.

In response, Russia is raising its alert levels and upgrading its strategic forces. Yet, Hillary Clinton believes the Russians have no reason to fear NATO’s military encirclement and no right to resist U.S.-supported coups in countries on Russia’s periphery. It is just such a contradiction of viewpoints that can turn a spark into an uncontrollable inferno.

What might happen, for instance, if Ukraine’s nationalist — and even neo-Nazi — militias, which wield increasing power over the corrupt and indecisive regime in Kiev, received modern weaponry from a tough-talking Clinton-45 administration and launched an offensive to exterminate ethnic Russians in eastern Ukraine and to reclaim Crimea, where 96 percent of the voters opted to secede from Ukraine and rejoin Russia?

A President Hillary Clinton would have talked herself into a position of supporting this “liberation” of “Russian-occupied territory” and her clever propagandists would surely present this “heroic struggle” as a war of good against evil, much as they justified bloody U.S. invasions of Iraq and Libya which Clinton supported as U.S. senator and Secretary of State, respectively.

What if the Ukrainian forces then fired missiles striking Russia’s naval base at Sevastopol in Crimea, killing some of the 20,000 Russian troops stationed there and inflicting damage on Russia’s Black Sea fleet? What if Kremlin hardliners finally got their way and unleashed the Russian army to launch a real invasion of Ukraine, crushing its military, rumbling through to Kiev and accomplishing their own “regime change”?

How would President Hillary Clinton respond? Would she put herself in the shoes of Russia’s leaders and search for some way to de-escalate or would she get high-and-mighty and escalate the crisis by activating NATO military forces to counter this “Russian aggression”?

Given what we know about Clinton’s tough-talking persona, the odds are good that she would opt for an escalation – and that could set the stage for nuclear war, possibly starting because the Russians would fear the imminence of a NATO first strike, made more possible by those ABM bases in Romania and Poland.

There are other areas in the world where a President Hillary Clinton would likely go to war albeit at a sub-nuclear level. During the campaign, she has made clear that she intends to invade Syria once she takes office, although she frames her invasions as humanitarian gestures, such as creating “safe zones” and “no-fly zones.”

In other words, although she condemns Russian “aggression,” she advocates aggressive war herself, seemingly incapable of recognizing her hypocrisies and only grudgingly acknowledging her “mistakes,” such as her support for the invasion of Iraq.

So, on Thursday, even as she made strong points about Trump’s mismatched temperament for becoming Commander-in-Chief, she flashed a harsh temperament of her own that also was unsettling, although in a different way. 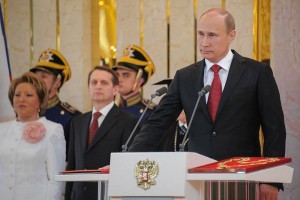 It’s hard to say which set of behaviors is more dangerous. One can imagine Trump having free-form or chaotic diplomatic encounters with allies and adversaries alike, while Clinton would plot and scheme, insisting on cooperation from allies and demanding capitulation from adversaries.

Clinton sprinkled her speech denouncing Trump with gratuitous insults aimed at Putin and undiplomatic slaps at Russia, such as, “If Donald gets his way, they’ll be celebrating in the Kremlin. We cannot let that happen.”

In short, there is reason to fear the election of either of these candidates, one because of his unpredictability and the other because of her rigidity. How, one might wonder, did the two major political parties reach this juncture, putting two arguably unfit personalities within reach of the nuclear codes?

[For more on this topic, see Consortiumnews.com’s “Yes, Hillary Clinton Is a Neocon” and “Would a Clinton Win Mean More Wars?’]

92 comments for “The Bigger Nuclear Risk: Trump or Clinton?”