As Campaign 2016 almost ignores the vital issues of war and peace – despite the reality of perpetual war – Daniel Berrigan, one of America’s great voices for peace, has gone silent, writes Michael Winship.

May is historically a month for protests, and first, I’d like to protest the fact that Rev. Daniel Berrigan died last weekend, just a few days shy of what would have been his 95th birthday on May 9.

May, too, was the month in which this outspoken Jesuit poet and peace activist, with his fellow priest and brother Philip, and seven others, staged one of the most significant and symbolic protests against the horrors of Vietnam. On May 17, 1968, they walked into the office of a draft board in Catonsville, Maryland, removed the files of young men eligible for military duty, took them to a parking lot next door, doused them with homemade napalm and set the files ablaze. 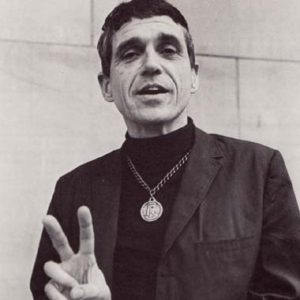 “Our apologies, good friends,” Dan Berrigan said, “for the fracture of good order, the burning of paper instead of children, the angering of the orderlies in the front parlor of the charnel house. We could not, so help us God, do otherwise.”

The Catonsville Nine were tried and convicted for destroying government property. Rather than go to prison, three of them, including Dan and Phil Berrigan, went on the lam, but the brothers soon were caught (while underground, Dan had a habit — greatly vexing to J. Edgar Hoover and the FBI — of popping up in public to deliver sermons, then disappearing again). In August 1970, Dan began his three-year sentence at the Federal Correctional Institution in Danbury, Connecticut.

So he wasn’t around to offer guidance the following year, in 1971, as many of the more militant in the anti-Vietnam war movement decided that in light of events like Catonsville the time had come to up the ante and move from largely peaceful mass demonstrations to more direct and sometimes even violent acts of civil disobedience.

This, too, was in May, 45 years ago this week, in fact, when thousands came from around the country and gathered in Washington under the slogan, “If the government is not going to stop the war, we will stop the government.”

The week before, perhaps as many as half a million had shown up for a Vietnam protest so mellow that many took advantage of a closed-off Pennsylvania Avenue to skateboard and sunbathe along the boulevard on a warm spring Saturday. But now, thousands gathered with the express purpose of physically blocking bridges, main arteries and traffic circles leading into the capital.

According to The New York Times, the Nixon White House responded with 12,000 federal troops, 5,100 local police and 1,500 National Guardsmen.

Police broke up an encampment at West Potomac Park, near the Lincoln and Jefferson memorials, and protesters scattered, many of them to the Georgetown University campus, where I was a student. I still remember the helicopters buzzing overhead.

On Monday, May 3, the protesters regrouped and put into action their plan to shut the city down during the morning rush hour, using hit-and-run tactics and any large or small object that came to hand. The police and military pushed back hard.

I was a student reporter and my photographer John and I headed toward Key Bridge near the Georgetown campus. Forever in my memory is the sight of Rhode Island U.S. Senator Claiborne Pell, standing on the steps of his townhouse in robe and pajamas, retrieving his daily copy of The Washington Post and looking completely befuddled by the flying debris and overturned cars around him.

Soon John and I were fleeing through streets and alleys with the demonstrators. We rounded the intersection of Prospect and 36th Streets and ran smack into a wall of tear gas, the worst I had ever experienced. We fell to the pavement, blinded, but soon were taken in hand by volunteer medics and led to a makeshift infirmary in the basement of a university building.

Once our eyes had been thoroughly flushed with water and we had a chance to rest a bit and catch our breath, we headed back to the streets and raced to the main campus where police on motor scooters, in total violation of an agreement with the university, fired grenade after grenade of tear gas at protesters and students alike.

Over the course of three days, some 12,000 protesters were taken into custody, the largest mass arrest in American history. There were so many the city’s jails couldn’t hold them all and most were taken to RFK Stadium. People from the neighborhood threw food and blankets over the security fence.

Photos of victims of the My Lai massacre in Vietnam galvanized public awareness about the barbarity of the war.

I wanted to report on what was happening at the stadium but figured the only way to do it was to get arrested myself. I went to a sit-in on the Capitol steps where police were dragging protesters into buses. Get close enough, I thought, and I was certain to be sucked into the vortex. Sure enough, an officer soon had his hand on my arm but just as he tightened his grip, a photographer I knew from the Post pulled my other arm in the opposite direction.

“He’s with me,” the photographer shouted and the cop actually let go. Thanks, I said to my friend, but inside I was screaming, “Stop helping me!”

I never did get into the stadium; ultimately, fewer than a hundred of the arrested were charged, everyone else was quickly released. The debate would continue over whether the violent confrontations were justified — on the face of it, the attempted shutdown was a failure — but in retrospect the government’s overreaction to the Mayday protests was a misstep, one more proof of a failed policy that was simply delaying the inevitable in Vietnam at the cost of thousands and thousands more lives.

Like the Berrigan brothers and their comrades at Catonsville, the attempt to obstruct the streets and bridges of Washington was an act of disobedience designed to throw a wrench in the works of the war machine.

The next year, Dan Berrigan was freed from Danbury after serving half his sentence. I interviewed a number of Jesuits for an article on Dan and Phil in Georgetown University’s alumni magazine, modeled on an extraordinary all-Berrigan issue of the Holy Cross Quarterly, then joined the staff of Democrat George McGovern’s quixotic, anti-war presidential campaign.

A few weeks after we had gone down to exhausted but noble defeat, I went to a lecture Dan Berrigan was giving at a downtown Washington church. I was nursing what I thought was just a very bad, long-lasting cold. We met afterwards and his greeting, characteristically to the point, was, “You look terrible. Go see a doctor.” Sound advice.

When I took off my shirt for the ER physician, revealing my fading McGovern tee shirt underneath, he said, “You’re the seventh McGovern guy I’ve had in here since the election.” Diagnosis: pneumonia.

Several years later, I had moved to New York. One Friday night, some friends showed up at my tiny apartment for a late dinner and with them was Dan Berrigan. He was in good form. Sufficient alcohol was consumed during the evening that unfortunately I recall little of what actually was said but I do remember Dan’s post-midnight recitation of another great Jesuit poet, Gerard Manley Hopkins:

Keeps grace: that keeps all his goings graces;

Lovely in limbs, and lovely in eyes not his

To the Father through the features of men’s faces.

In the following years, I lost touch with him and apparently that was not uncommon. He took the advice of the great Catholic philosopher and author Thomas Merton and, in the words of Georgetown senior fellow Paul Elie, became “a figure of radical purity and apartness.”

The man once so visible, once so potent and public a symbol of dissidence, quietly continued to write and protest (and get arrested), as he kept his vows, studied and taught scripture and humbly ministered to those who needed his faith. The just man justiced and kept grace.

May is historically a month for protests. It’s the month of Chicago’s Haymarket bombing in 1886; of Paris in 1968, when students and workers almost brought down the government of Charles de Gaulle; of May 1970 and deaths at Kent State and Jackson State, the resulting student strike that closed colleges and universities across the country.

And now in yet another May of turmoil we protest the death of Dan Berrigan, mourn his passing but celebrate all that he did and said and wrote, while celebrating, too, all those like him who speak out and strive to make this country a land of peace and justice that’s honest and wise and decent and compassionate. You know, the things that truly make America great.

Michael Winship is the Emmy Award-winning senior writer of Moyers & Company and BillMoyers.com, and a former senior writing fellow at the policy and advocacy group Demos. Follow him on Twitter at @MichaelWinship. [This story originally appeared at http://billmoyers.com/story/may-protest-daniel-berrigan/]

← A Longwinded and Winding Rhodes
Exploiting Global Warming for Geo-Politics →