Official Washington is abuzz about the boasts of President Obama’s foreign policy speechwriter Ben Rhodes regarding his selling the Iran nuclear deal, a new club being wielded by the bomb-bomb-bomb-Iran neocons, explains James W Carden.

A recent New York Times Magazine profile of Deputy National Security Adviser Ben Rhodes has been the talk of the Beltway since it appeared last week. In some respects the piece is a wholly conventional piece of Beltway puffery: Rhodes is presented to readers as something of a “boy wonder,” a frustrated novelist called to higher duty after witnessing the collapse of the Twin Towers from the vantage point of Williamsburg, Brooklyn.

Rhodes, through the help of some well-connected family friends, quickly found his true calling: climbing the greasy pole of the Washington foreign policy establishment. 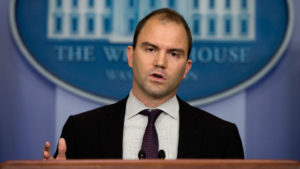 A staff job working for former Congressman Lee Hamilton at the Wilson Center in Washington, led to staff jobs drafting the findings of the Iraq Study Group and the 9/11 Commission. Before long, Rhodes, the former Rudy Giuliani campaign volunteer, was working side by side with presidential candidate Barack Obama as a foreign policy speechwriter. From there, Rhodes made his way to the National Security Council where he has remained since 2009.

In another New York Times piece on Rhodes, this one from 2013, former U.S. Ambassador to Russia and NSC Senior Director Michael McFaul told the Times, “Ben always holds on to the pen … [and] because of his close personal relationship with the president, Ben can always make policy through the speeches and statements made by President Obama.”

In that same piece Rhodes was somewhat more circumspect, telling that Times that, “My main job, which has always been my job, is to be the person who represents the president’s view,” no easy feat when you consider that Mr. Obama, if Jeffrey Goldberg’s lengthy exit interview of the President in The Atlantic is to be believed, seems to hold a number of views which contradict his own policies.

Having allowed three years to pass without publishing a Ben Rhodes profile, the New York Times obviously felt it was once again time to bring readers up-to-speed on the doings of the talented Mr. Rhodes. This time the magazine contracted the job out to David Samuels, a longtime journalist who has seemingly profiled everyone from Yasir Arafat to Britney Spears and Kayne West.

Samuels’ piece contains a number of gems. Rhodes’ self-regard is put front and center. At one point the wunderkind tells Samuels: “I don’t know anymore where I begin and Obama ends.” Oh, dear.

But where things get really interesting, and where most of the media attention has subsequently focused, is when Rhodes tells Samuels about his role in “selling” the Iran deal. According to Rhodes, the White House communications strategy was to invent a borderline fictitious narrative and sell it to gullible journalists who they knew they could count on to simply regurgitate the White House (read: Rhodes’s) message.

The task of selling the Iran deal to the press was rather easier than one might expect, since, according to the 38-year-old Rhodes, “The average reporter we talk to is 27 years old, and their only reporting experience consists of being around political campaigns. That’s a sea change. They literally know nothing.”

The question now being asked around town is: what is it that Rhodes knows, exactly? What we know (or at any rate can safely surmise) is that the boy wonder of the NSC was unaware that his interlocutor, Samuels, was one of the Iran deal’s most outspoken (or unhinged) opponents, making the “rational” case for bombing Iran.

Per Samuels: “Bombing Iran’s nuclear facilities is the surest way for Israel to restore the image of strength and unpredictability that made it valuable to the United States after 1967 while also eliminating Iran as a viable partner for America’s favor.” Uh-huh.

Samuels rather deviously used the Rhodes profile to grind that axe once more, and attempts to paint proponents of the Iran deal as dupes of the Rhodes spin machine. If Rhodes took a perhaps three-minute break from channeling the voice of the President, he might have been better prepared for Samuels, made less a fool of himself, and refrained from impugning the integrity of a very fine journalist like Al-Monitor’s Laura Rozen.

Did Rhodes know what Samuels was up to or did he succumb to the all too common of Beltway delusion of believing in one’s own omniscience?

10 comments for “A Longwinded and Winding Rhodes”