Apparently, other countries, but not the U.S., have oligarchs. Billionaire and Commerce Secretary Penny Pritzker came and went to the National Press Club with hardly a tough question on Monday.

I’d submitted several questions, but first a word on the choreography of the event: Virtually every “news maker” event I recall seeing at the Press Club had the speaker at the head table which is on a stage a few feet up, speaking at a podium. This event, it was just her and the moderator, Press Club President Thomas Burr on two cushy chairs on the stage, with the “head table” below them. Whether this was to elevate the two of them, save her the trouble of having prepared remarks, or perhaps a new thing, an attempt to cast the billionaire in a more casual light — inspired by Davos-type events — I don’t know. But it was weird. [See video and PDF.]

Speaking of choreography, on the other end of Pennsylvania Avenue around the same time, several hundred people were arrested at the Capitol as part of the “Democracy Spring” and “Democracy Awakening” actions. It seemed odd to me, protests happening with “arrests” as part of a very planned action aimed in part against money in politics, while the very personification of big business advocacy in government received virtually no scrutiny.

It’s not just her job, or that she and her family is incredibly rich. It’s that Pritzker enriched herself by crashing a bank with sub-prime loans, causing 1,400 people to lose their savings. [See Consortiumnews.com’s “Obama’s Sub-Prime Conflict.”]

Finally, and perhaps most incredibly, Forbes several years ago did an investigation into the Pritzker family and found that they set up shell companies decades ago in ways that would be illegal now. In a sense, what we’re seeing is not just oligarchy, it’s aristocracy. A newly rich person can’t do what they’ve done, according to Forbes. [See a summary off each of these issues, based on investigations by Tim Anderson, Dennis Bernstein and McClatchy.]

And offshore shell companies were in the news of late. Oxfam just released a report claiming: “Tax dodging by multinational corporations costs the U.S. approximately $111 billion each year and saps an estimated $100 billion every year from poor countries” [PDF]. A prior report from the Tax Justice Network would seem to indicate that this was a severe under-estimate. That found that as of 2010, the super-rich were hiding at least $21 trillion in accounts outside their home countries [PDF].

I’d at least expected a mild question to Pritzker about offshore activity — and figured she’d talk about how the Obama administration is allegedly making moves to stop tax inversions. But there was nothing about any of this.

At the news maker event, I wrote a question on a card on the nub of the issues at play, something like this: “A relation of yours — Liesel Pritzker Simmons — is mentioned in the recently released Panama Papers. Do you have a comment on the extent of offshore shell companies — especially given that your family uses them through grandfather clauses in ways that would not be legal for anyone new now?”

That didn’t get asked, nor did several I’d submitted in an email prior to the to the Press Club president by email: “The Pope — and Bernie Sanders — talk about a ‘moral economy’ — that it’s inherently unjust if a very few individuals and families have enormous wealth while billions on the planet have virtually nothing. Your family of course is enormously wealthy — What do you think of that? (For overview, see ‘Panama Papers: Pritzkers, American Oligarchs.’)

“You have been charged with crashing Superior Bank in Chicago with a subprime mortgage scheme, resulting in 1,400 people losing their savings. How do you respond to these charges? (‘Obama’s Subprime Conflict’ and Bloomberg ‘Pritzker’s Superior Bank Subprime Losses Blemish Resume’)

“Do you argue that your massive fundraising efforts for Obama in 2008 and 2012 had nothing to do with him appointing you as Secretary of Commerce? (See from Public Campaign ‘Penny Pritzker, Not Just an Obama Donor.’) 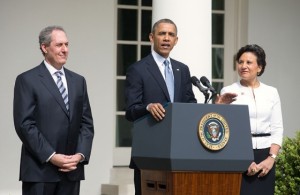 President Barack Obama announced the nominations of Penny Pritzker as Secretary of Commerce, and Mike Froman as U.S. Trade Representative, in the Rose Garden of the White House on May 2, 2013. (Official White House Photo by Chuck Kennedy)

“The name of Liesel Pritzker Simmons appears in the recently released Panama Papers, a relative who sued much of the rest of the family for allegedly trying to cheat her. But what’s perhaps notable about your family, as Forbes has written, is that you set up shell companies decades ago and thus can do things because of grandfather clauses that are not legal any more. Is that moral?

“Forbes — which estimates your net worth at 2.3 billion — had specific questions for you: ‘Tell us from the very, very beginning: What led to your being paid $53.6 million in ‘consultant’ income by your family’s offshore trusts in 2012? ‘Did your family’s carve-up finally produce significant tax payments? ‘Why are you your own biggest debtor? ‘Why is even your house in an LLC? ‘How do you rack up $250,000 on an American Express card?’

“On trade issues and the TPP — how do you respond to —

“Manuel Pérez-Rocha of the Institute for Policy Studies — who has argued that NAFTA has pushed many Mexicans to migrate to the U.S. since it has become an ‘engine of poverty in Mexico’ since it has gutted family farming in Mexico, as wells as mom and pop stores, and indigenous industry.”

The questions that did get asked were fairly pedestrian and quite friendly: “Can you give us your perspective on the trade and trade agreements, in particular, and any fears about possible trade wars that have been talked about? … What is the Commerce Department doing with the U.S. and international partners to combat the cyber threat to the United States businesses? … Intellectual property of U.S. businesses in many forms; music, movies, have been stolen and stolen frequently. How much does this cost American businesses? [Prizker: ‘I don’t have the exact number in front of me.’] … Do you believe that China is manipulating its currency to gain a trade advantage, and do you see any other countries doing that?”

The toughest question was probably “We’ve added nearly $10 trillion to the U.S. debt in the last seven, eight years. Is this a ticking time bomb for the U.S. and the global economy?” [See video and PDF.] The last question was: “I understand you are a marathon runner. I would like to know, and our audience, I think, would like to know, what is the secret for training for a marathon?”

It turned out Pritzker didn’t have to run from much in her appearance at the Press Club.

Sam Husseini is communications director for the Institute for Public Accuracy and founder of votepact.org, which urges left-right cooperation. Follow him on twitter: @samhusseini. [This article originally appeared as a blog post at http://husseini.posthaven.com/the-invisibility-of-us-oligarchs-the-case-of-penny-pritzker.]

3 comments for “Bowing to America’s Oligarchs”