Exclusive: A Zionist group bought a full-page New York Times ad to demonize Sidney and Max Blumenthal as “anti-Semites” and to demand that Hillary Clinton renounce them, a revival of a crude McCarthyism, writes Robert Parry.

An ugly feature of life in modern Washington is that anyone who dares criticize Israel’s treatment of the Palestinians can expect to be subjected to nasty accusations of “anti-Semitism” and other attacks that are meant to make the target politically untouchable.

For example, The New York Times published a full-page ad on Saturday paid for by a pro-Zionist group called The World Values Network featuring a grainy graphic of Sidney Blumenthal and his son Max Blumenthal along with a demand that “Hillary Clinton must disavow her anti-Israel advisors.” 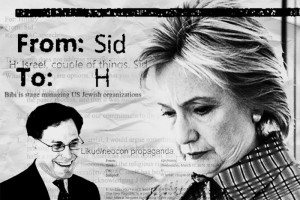 A graphic from The World Values Network’s attack on Sidney and Max Blumenthal.

The text accuses Sidney Blumenthal, Clinton’s longtime personal friend and adviser, of sending the Secretary of State emails in which “he was obsessed with painting the Jewish state in the most unflattering light.”

The ad cites Blumenthal writing on March 20, 2010, that “The policy of the present Israeli government is endangering the lives of American soldiers in Iraq and Afghanistan.” Blumenthal is also attacked for noting Israeli “settlers’ theft of water from Palestinian towns” and, according to the ad, sending Clinton an article “claiming Israel was pursuing goals contrary to U.S. interests, while ‘starting a rebellion’ against the United States.”

Though such comments might seem like no-brainers to anyone who has followed Israel’s mistreatment of Palestinians and how that behavior has inspired Islamic extremism, The World Values Network views the comments as evidence of anti-Semitism.

The ad then denounces Blumenthal’s son, Max, saying “Even more shocking still were Sid Blumenthal’s attempts to feed Hillary Clinton toxic analysis from his son Max, a self-declared ‘anti-Zionist’ and fanatical Israel-hater. This rotten apple did not fall far from the tree.”

The World Values Network is headed by Rabbi Shmuley Boteach, who likes to go by the nickname “America’s Rabbi.” The group is one of many that has sought to scar any political figure who won’t toe the line of Israel’s right-wing government as it rejects any reasonable peace agreement with the Palestinians and periodically “mows the grass” by launching bloody attacks on Gaza and the West Bank.

Typically, the way this Zionist political strategy works is to demonize individuals, like Blumenthal or his son, and then demand that an ally must disassociate from them or face political reprisals. The approach is a form of McCarthyism. In this case, The World Values Network makes clear what Clinton must do if she wishes to receive Jewish support in her presidential campaign. She must publicly renounce the Blumenthals.

The ad says: “Hillary Clinton is running for President. She’s asking friends of Israel to count on her support of the always-vulnerable Jewish State. If she won’t disassociate herself from her discredited advisor Sid Blumenthal and his rabid, Israel-hating son Max, how can we?”

In a similar attack, the same group has sought to drive a wedge between businessman Richard Branson and both former President Jimmy Carter and South African Bishop Desmond Tutu for their offense of criticizing Israel’s abuse of Palestinians.

“But a little known and unfortunate fact about Branson is his strange, anti-Israel opinions and activities that are beneath a man known for having a good and kind heart,” The World Values Network states at its Web site. “In 2007, Branson founded an organization called ‘The Elders’ which was made up of a council of twelve elder statesmen who would serve as ‘independent global leaders working together for peace and human rights.’ …

“Unfortunately among the elders that Branson selected for his new group are a Who’s who of some of the most tenacious, anti-Israel public figures in the world today. The Elders’ anti-Israel statements and press releases condemning the Jewish state are a sad testament to this fact.

“Topping the Elders’ list is former President Jimmy Carter, a man dedicated to the disgustingly fraudulent and anti-Semitic proposition that Israel is an apartheid State. Carter’s defamatory fabrications about the Jewish State include the lie not only that Israel is like apartheid South Africa but that ‘voices from Jerusalem dominate our media.’ Last year he claimed [Prime Minister Benjamin] Netanyahu wasn’t interested in making peace…

“Other ‘elders’ in Branson’s organization include the notoriously anti-Israel, anti-Semitic Bishop Desmond Tutu, … Tutu is a supporter of the BDS movement, calling for an economic and cultural boycott of Israel. His bigoted views have surfaced with statements such as, ‘The Jewish lobby is powerful — very powerful,’ while accusing Jews of ‘an arrogance — the arrogance of power because Jews are a powerful lobby in this land and all kinds of people woo their support.’

“Tutu has stated that Zionism has ‘very many parallels with racism,’ and has accused the Jewish state of subjecting the Palestinians to ‘Israeli Apartheid.’”

Again, you might say that little of what Carter and Tutu have said is controversial — at least in the sense of what is empirically true. After all, Netanyahu himself vowed during his last campaign that he would not reach a peace agreement with the Palestinians and there is no doubt that the Israelis treat the Palestinians as inferior beings who are sharply restricted in where they can and cannot go.

But the goal of attacks like the ones from The World Values Network is to use “guilt by association” to marginalize anyone who criticizes Israel by trying to scare a Clinton or a Branson into renouncing the Blumenthals or Carter or Tutu. If that wedge can be driven, then the repudiation itself can be waved about as an example of what happens to some public figure who dares fault the Israeli government.

As the powerful American Israel Public Affairs Committee holds its annual convention in Washington – and U.S. political leaders from all political persuasions troop across the stage to express their devotion and dedication to Israel – The New York Times ad is a reminder of what’s in store for anyone who deviates.

36 comments for “An Ugly Smear Campaign”