Two hundred years after the “Great Game” for domination of Central Asia began with the Russo-Persian Treaty of 1813, Washington is maneuvering to increase its military presence on Russia’s underbelly, this time through a “counterterrorism partnership” with Tajikistan and its neighbors.

Last month, the Pentagon announced plans for $50 million in new military aid to Central Asia — with a focus on Tajikistan — to “counter the Taliban, ISIL [an acronym for Islamic State], and other regionally-based terrorist groups, and to promote stability in the region.” The aid will also help the U.S. military get its feet in the door by enabling “interoperability and collaboration” with local partner armed forces. 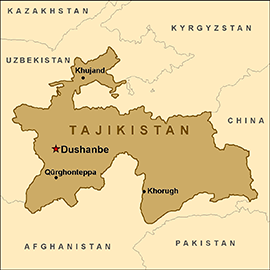 The program comes at a time when the United States and NATO are trying to counter Moscow by providing billions of dollars in new aid to Russia’s neighbors, from the Baltic States and Ukraine to Georgia, and stepping up naval exercises in the Black Sea. The announcement follows a visit last November by Secretary of State John Kerry to Tajikistan and other former Soviet republics in the region, where he pledged “U.S. security cooperation.”

It also represents the first major escalation of U.S. military aid to Central Asia since the Pentagon sponsored an intensive training program for special forces in Kyrgystan and Tajikistan in 2012 and 2013. That operation, ostensibly aimed at boosting narcotics enforcement, was criticized by researchers who noted that it would simply eliminate competitors of the country’s biggest drug trafficking rings, which are led by high-level politicians and state officials.

The new military aid program, if approved by Congress, aims to offset reverses suffered by Washington in the region in 2014. That year the government of Kyrgyzstan closed a major U.S. air base, which had been implicated in notoriously corrupt dealings with the country’s former president. Kyrgyzstan also joined the Eurasian Economic Union, a common market that includes Russia, and terminated an aid agreement with Washington.

The United States is not Tajikistan’s only suitor, however. The chief of staff of Pakistan’s army, General Raheel Sharif, met earlier this month with Tajikistan’s president, Emomali Rahmon, to discuss “cooperation between national armies and law enforcement agencies of Tajikistan and Pakistan in the fight against modern threats and challenges, including terrorism, extremism and drug trafficking.”

His visit came just one day after a leading Chinese military official told President Rahmon that Beijing was ready to “enhance military cooperation and multilateral counter-terrorism collaboration with Tajikistan.”

Tajikistan is already a member of the Shanghai Cooperation Organization, which promotes military cooperation and intelligence sharing with China, Russia and other member states. Tajikistan is also a key transit country for a huge new gas pipeline slated to run from Turkmenistan to China. China’s longer-run plans call for Tajikistan to become the first link in a planned commercial route from China to Europe’s markets, called the Silk Road Economic Belt.

For now, Russia still enjoys the strongest presence in Tajikistan. It stations several thousand troops in the country to support border security. Moscow recently earmarked $1.2 billion to train and equip Tajikistan’s army and plans to hold major joint exercises in coming days. Russia hopes to prevent Islamist insurgents from moving out of Afghanistan and destabilizing other Muslim countries on or near Russia’s southern border.

All of the governments courting Tajikistan are turning a blind eye to the corruption and brutality of the country’s regime — which even the Russian media note is becoming “totalitarian.” This May, voters in Tajikistan will almost certainly approve a referendum to anoint President Rahmon “Leader of the Nation” and amend the Constitution to exempt him from the two-term limit.

Human Rights Watch and the Norwegian Helsinki Committee in February accused the Rahmon government of “arresting, imprisoning, and torturing members of the country’s peaceful political opposition” and even kidnapping critics who live abroad.

One critic of the Rahmon regime was shot dead in Istanbul; another was seized in Moscow, where he had lived for a decade, and flown home to serve a 13-year prison sentence.

Said one senior researcher at Human Rights Watch, “Tajikistan is in the midst of the worst political and religious crackdown since the end of the country’s civil war,” which claimed the lives of up to 100,000 people in mid-1990s. “Hundreds of people [are] landing behind bars for no other reason than their peaceful political work. Tajikistan’s human rights crisis is expanding by the day, but the response of Washington, Brussels, and other international partners has fallen seriously short.”

Human rights groups called on the Obama administration to “designate Tajikistan a ‘country of particular concern’ under the International Religious Freedom Act, for its systematic, ongoing, and egregious violations of religious and political freedoms without further delay.”

So far, however, the Pentagon’s plans for a closer “counterterrorism partnership” appear to be trumping the cause of human rights in Washington. And the European Union, also hoping to wean Tajikistan away from Russia, pledged 251 million Euros for development funding.

For millions of people suffering under corrupt, repressive regimes in Tajikistan and the other “Stans” of Central Asia, such interventions perpetuate the “Great Game” that foreign powers have played at their expense for two centuries. From the U.S. perspective, perpetuating our mindless military competition with Russia in such distant lands is both counterproductive and inhumane. It’s time for Washington to stop playing the Game.

Jonathan Marshall is author or co-author of five books on international affairs, including The Lebanese Connection: Corruption, Civil War and the International Drug Traffic (Stanford University Press, 2012). Some of his previous articles for Consortiumnews were “Risky Blowback from Russian Sanctions”; “Neocons Want Regime Change in Iran”; “Saudi Cash Wins France’s Favor”; “The Saudis’ Hurt Feelings”; “Saudi Arabia’s Nuclear Bluster”; “The US Hand in the Syrian Mess”; and “Hidden Origins of Syria’s Civil War.”]