Saudi Arabia and Israel keep ratcheting up the pressure to kill the deal for constraining Iran’s nuclear program with the latest gambit a renewed Saudi threat to obtain its own nuclear capability if the Iran deal isn’t scrapped, a warning that may be more bluster than believable, writes Jonathan Marshall.

As if the Mideast weren’t troubled enough, we now learn from Rupert Murdoch’s Sunday Times that Saudi Arabia has apparently “taken the ‘strategic decision’ to acquire ‘off-the-shelf’ atomic weapons from Pakistan.”

This and many recent similar stories blame the emergence of Saudi Arabia’s alleged nuclear ambitions on President Barack Obama’s perceived failure to check Iran. “Saudi Arabia is so angry at the emerging nuclear agreement between Iran and the major powers that it is threatening to develop its own nuclear capability, one more indication of the deep differences between the United States and the Persian Gulf Arab states over the deal,” commented The New York Times in an editorial on May 15. 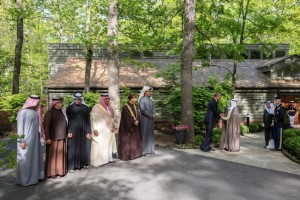 President Barack Obama shakes hands with His Highness Sheikh Sabah Al-Ahmad Al-Jaber Al Sabah, Amir of the State of Kuwait, as Gulf Cooperation Council (GCC) leaders prepare to have a group photo with the President outside of the Laurel Cabin at the conclusion of a summit meeting at Camp David, Maryland, May 14, 2015. (Official White House Photo by Pete Souza)

Saudi Arabia has been playing the nuclear card for years, however. In 2003, the Saudis leaked a “strategic review” that included the option of acquiring a “nuclear capability” as a deterrent. The Guardian, which broke the story, called it a “worrying development” that reflected “Riyadh’s estrangement from Washington” and “worries about an Iranian nuclear programme.”

In 2006, Saudi Arabia announced its interest in developing a nuclear energy program with other members of the Gulf Cooperation Council. As journalists reported at the time, “Few observers doubt that promoting the idea of a joint atomic energy program between the predominantly Sunni Arab states is a way for Saudi Arabia to send a message to the United States that the Arab state will match Tehran’s nuclear power if it needs to.”

Years have passed without the Saudis making good on these threats. And, there are strong reasons to question the veracity of leaks about Riyadh’s nuclear intentions now. Many experts seriously doubt whether the Saudis really intend to break their treaty obligations and risk international sanctions by trying to acquire nuclear weapons, particularly when they have lived with a nuclear-armed Israel for years.

Saudi Arabia would require many years to build nuclear weapons from scratch; the country has only a very modest atomic energy research program, not a single nuclear power reactor, and no known enrichment facilities. Thus Riyadh’s nuclear ambitions only make sense if Saudi Arabia has, as often claimed, arranged with Islamabad to obtain fully armed nuclear weapons in exchange for financing Pakistan’s nuclear program.

Such claims, while not totally implausible, remain “speculation,” according to the Nuclear Threat Initiative, a leading NGO devoted to proliferation issues. Stories about the Pakistan connection originated with a former Saudi diplomat who defected to the United States in the 1990s. He also claimed that Saudi Arabia provided almost $5 billion to Saddam Hussein to finance an Iraqi nuclear weapons program.

“Riyadh has denied the veracity of Khilewi’s statements, and most experts dismiss their credibility,” according to NTI. “Most analysts believe it highly unlikely Pakistan would ever follow through with such an agreement, were it to even exist, given a host of disincentives.”

The story has been kept alive over the years by Israeli intelligence leaks. As BBC news reported in 2013, “it is Israeli information – that Saudi Arabia is now ready to take delivery of finished warheads for its long-range missiles – that informs some recent US and NATO intelligence reporting. Israel of course shares Saudi Arabia’s motive in wanting to worry the US into containing Iran.”

Pakistan called the claim of a nuclear deal with Saudi Arabia “speculative, mischievous and baseless.” Of course, Islamabad would say that even if the deal were real. But Pakistan would face “huge disincentives” against transferring nuclear weapons, including the threat of international sanctions and the loss of military aid from Washington, notes Philipp Bleek, a proliferation expert at the Monterey Institute of International Studies.

“Moreover,” Bleek writes, “Pakistan is locked in an arms race with archrival India, and New Delhi’s long-term nuclear weapon production capabilities significantly exceed those of Islamabad, so the latter can ill-afford to spare a meaningful number of nuclear weapons.” Pakistan’s recent refusal to send troops to support Saudi Arabia’s attacks on Yemen is further evidence that it is no puppet of Riyadh.

Bleek observes that the very frequency of leaks about Saudi Arabia’s nuclear intentions weighs against the seriousness of that threat:

“History suggests that while some states have trumpeted their potential desire for nuclear weapons, think Germany in the early years of the Cold War, or Japan more recently, they tend not to be those that later went on to actually acquire them. And for good reason: calling attention to proliferation intentions is counterproductive if one is intent on actually proliferating. Instead, states tend to draw attention to their potential proliferation in the service of another goal: rallying others to address the security concerns that are motivating potential proliferation, and especially securing protection from powerful allies.”

Saudi Arabia’s latest nuclear leaks may be having their intended effect of bolstering the Arab monarchy’s bargaining leverage with Washington. Although President Obama stopped short of promising a formal military alliance at the recent summit with members of the Gulf Cooperation Council, he reaffirmed America’s “ironclad commitment to the security of our gulf partners,” and promised more wide-ranging military aid, including creation of “an early-warning capability for a regional missile defense system.”

The Obama administration should stop making such concessions in the face of dubious Saudi proliferation warnings. It should simply stick to its course of seeking a comprehensive nuclear agreement with Iran. Such an agreement remains the best guarantee of Saudi Arabia’s long-term security. And in the short term, the Saudis have no legitimate reason to fear Iran’s nuclear program, which is one of the most closely inspected on Earth.

Iran has no known nuclear weapons capability and has enriched uranium only to levels useful for medical or peaceful atomic energy applications. The International Atomic Energy Agency has uncovered no substantiated evidence of Iran attempting to break out of the Non-Proliferation Treaty (NPT), to which Saudi Arabia is also a signatory.

If the Saudis ignore such evidence and really do seek nuclear weapons from Pakistan, the White House should take a hard line and follow the example set by the Ford administration in 1976, which warned South Korea that it would “review the entire spectrum of its relations” if Seoul moved to develop nuclear weapons.

Ideally, the United States should also begin exploring a more productive strategy for reassuring both Saudi Arabia and Iran without making concessions to either one. Instead of selling more arms, reaching new defense pacts, or cracking down further on Iran, why not get behind Saudi Arabia’s longstanding support for a nuclear weapon free zone in the Middle East?

That goal was endorsed by the UN General Assembly in 2012. It may be a political non-starter for now in Washington, but the surest way to reduce the risk of proliferation in the Middle East would be to inspect, control, and eventually eliminate the region’s one existing nuclear arsenal, in Israel.

Jonathan Marshall is an independent researcher living in San Anselmo, California. Some of his previous articles for Consortiumnews were “Risky Blowback from Russian Sanctions”; “Neocons Want Regime Change in Iran”; “Saudi Cash Wins France’s Favor”; and “The Saudis’ Hurt Feelings.”