Despite the 2008 Wall Street crash and government promises of reform, the old back-scratching ways of special favors and influence are again in vogue – as if they were ever out of style, writes JP Sottile.

You’ve gotta give former U.S. Treasury Secretary Timothy Geithner a lot of credit. That is, of course, if you can still afford to float an “undisclosed” line of credit at an “undisclosed” interest rate after the wealth-denuding Crash of 2008. Luckily for the former point-man on all things bailout, some of the financial wizards who blew one of history’s biggest speculative bubbles can afford to give him all the credit he could ever want.

According to Bloomberg, that’s exactly what JP Morgan Chase just did when it gave Geithner enough credit to buy into a $12 billion equity fund. That “buy-in” will help him leverage “his own position in the fund” so he can reap a potential “20–30%” windfall on his investment. It’s a tidy little reward for the man who left the top spot at the New York Federal Reserve in January of 2009 to run the Treasury Department at perhaps the most critical juncture facing Wall Street since the start of the Great Depression.

As a newly-minted Treasury Secretary, Geithner took over at exactly the moment when Wall Street’s dodgy business decisions could’ve been punished, its financial malfeasance should’ve been prosecuted and taxpayers — who lost $19 trillion in household wealth — would’ve been bailed out if Washington’s cozy little way-station for future One-Percenters had prioritized their needs over the banking industry’s uninterrupted dreams of avarice.

Now that Geithner is back walking “The Street,” he’s pursuing his own champagne wishes and caviar dreams as President of private equity firm Warburg Pincus. The fund manages $37 billion in assets and, according to the New York Times, it invests in “energy, health care, financial services, industrial and business services and technology, media and telecommunications.” That’s quite a smorgasbord of industries that, not coincidentally, have a lot of interaction with Federal regulators and Congressional busybodies.

Perhaps that’s why Warburg Pincus spent so generously on lobbying ($1,060,000) and on political contributions ($1,082,460) in the last election cycle. As OpenSecrets.org points out in all-too familiar detail, Warburg Pincus approached the 2014 election like a cautious roulette player. The only difference was the color scheme on the board. In the Congressional casino called Washington, DC, the red and black numbers of Las Vegas and Monte Carlo are replaced with Red Republicans and Blue Democrats from Knoxville and Passaic. Here’s how the bets were placed:

From the top of the list all the way down to the tit-for-tat donations to Sen. Cory Booker, D-New Jersey, and Sen. Lamar Alexander, R-Tennessee, the wizards of Warburg did what any good gambler does — they hedged their bets. But that’s only half of Warburg’s — and Wall Street’s — overall strategy for protecting their mounting wealth from the tedious trials of regulatory oversight.

That’s because familiarity is the best insurance of all and few industries have the same level of familiarity with the people who govern them as does the financial industry. The revolving door between the Pentagon and the defense industry is the only other door greased as thickly as the carousel between Wall Street and Washington.

To wit, the comparatively small Warburg employed 38 lobbyists in 2014. And of those lobbyists, OpenSecrets.org found that 33 of them “previously held government jobs.” This is one case where familiarity does not breed contempt.

Warburg and the ever-bigger firms feeding off the unabated financialization of the economy pour $100 million per year into Washington’s well-oiled lobbying machine. They seek the type of familiarity that only comes with working inside regulatory agencies. It’s a valuable and highly saleable commodity for those eager to trade-in their public service chips for an almost guaranteed jackpot in the financialized economy.

And it is also an incentive for private profiteers to leave the burled-walnut walls of “Too Big To Fail” banks to ply their trade in so-called “public service.” The eventual return on investment for those who pass through the revolving door is easily worth two, four or six years making low six-figures inside a Federal agency.

But what if the promise of potential, post-public service riches isn’t quite enough to convince a possible appointee to take a plum post at the Treasury Department? The answer is that some of Wall Street’s biggest banks offer hefty incentives to their already well-heeled employees if they decide to hop on New York’s LaGuardia shuttle down to Washington’s Reagan National Airport to take a shot at servicing the public. And that’s exactly what current Treasury Secretary Jack Lew got from Citigroup when he took over the top job from Geithner.

Although Lew — who worked at Citigroup with former Treasury Secretary and one-time Geithner mentor Robert Rubin — didn’t quite get the “bounty” many initially claimed, it did turn out that his contract with the mortgage manipulating behemoth included an early vesting clause that allowed him to collect $250,000 to $500,000 that would have otherwise been forfeited by leaving his position early. That is, of course, if he wasn’t going back into “public service.”

As David Dayen pointed out in the New Republic, Lew ‘s early jump out of Citigroup’s executive offices was ultimately cushioned by a fulsome golden parachute worth $1.1 million. According to Dayen, this type of incentive to move through the revolving door is an all-too common practice for the banks that have, thus far, paid north of $204 billion in fines to make their financial “misbehavior” go away like it was nothing more than a traffic ticket.

Perhaps even smarmier than this pattern of “paying away” potential criminal charges to top executives is the unctuous detail that a huge chunk of these fines — including the fees paid to Wall Street’s top law firms — are actually tax deductible. It’s something Geithner’s new lender — JPMorgan Chase — used to soften the blow of its $13 billion, prosecution-free settlement. Apparently, crime does pay … and it’s tax deductible.

It is also notable that the person leading the Justice Department when these deals were cut — Attorney General Eric Holder — was himself a denizen of Wall Street legal powerhouse Covington & Burling both before and after his stint in “public service.” Unsurprisingly, Covington & Burling’s client list includes Bank of America, Citigroup, JPMorgan Chase and Wells Fargo, according to Lee Fang of The Intercept. 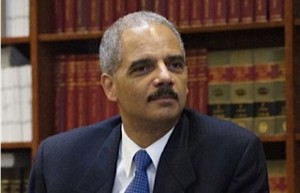 It all comes full circle when the Wall Street lawyer turned Attorney General leaves after a bevy of deal-making and quickly spins that position into lobbying gold. And, just to make sure the door is greased in the future, Holder became a pitchman for a certain Wall Street-friendly Democratic Presidential hopeful who, as chance would have it, is married to one of his former bosses.

Yes, Holder was Deputy Attorney General for President Bill Clinton from 1997 to 2001. So, Holder’s actually made two trips back and forth through the revolving door. He’s now worth an estimated $11.5 million.

Same goes for current Treasury Secretary Jack Lew. He worked in the Office of Management and Budget from 1998 to 2001. Unlike Holder, he still hasn’t collected on his imminent second pass through the door, but he’s in no hurry … thanks to that golden parachute from Citibank. Lew is worth somewhere between $748,000 and $1.7 million, so he’s going to have to cope with his current job’s $199,700 salary until he can cash-in like other Clinton/Obama White House alums.

When he returned to “public service” as Director of President Obama’s National Economic Council in 2009, Summers was worth somewhere between $7 million and $31 million. Alas, his dream of becoming Chair of the Federal Reserve was scuttled by Sen. Elizabeth Warren, D-Massachusetts, in 2013. Amazingly enough, Summers’s net worth has since climbed to $40 million.

And then there is Timothy Geithner’s old boss in the Clinton White House, former Treasury Secretary Robert Rubin. That’s right. Geithner was Under Secretary of the Treasury for International Affairs during the end of Rubin’s tenure. Rubin, who “served” from 1995 to 1999, led the Clinton economic team’s push to demolish Glass-Steagall’s long-standing barrier between banking and finance. Tearing down that wall led to ever-more financialization of the economy, something he benefited from when he went to Citigroup in 1999.

Rubin was eventually pressured to resign as senior counselor to Citigroup and from its Board of Directors in 2009. The financial crisis he helped to create was exacting a toll on Citigroup’s stock price. Luckily, Treasury was being run by his old friend — Treasury Secretary Timothy Geithner.

Citigroup received “$476.2 billion in cash and guarantees” under the TARP bailout plan being administered by his former underling at the Treasury Department. In fact, they were so familiar that Geithner had been tapped to run Citigroup in 2007 when Rubin served as a temporary Chairman and Geithner was earning a mere $411,200 as head of the New York Federal Reserve.

Geithner turned down the job, but those close ties sparked criticism that Geithner “protected” Citigroup during his tenure. Whether he did or not, Rubin, his old boss from the Clinton years certainly came through the crash unscathed. Rubin, the one-time Goldman Sachs employee, momentary Chairman of Citigroup and current Co-Chairman of the Council on Foreign Relations, is now worth $100 million.

Now it’s Geithner’s turn to cash in. The former head of the New York Federal Reserve, former Treasury Secretary and long-time “public servant” in two administrations reportedly choose the less-well-known Warburg Pincus because he “specifically did not want to work for a company that he either directly or indirectly regulated at the Treasury or the Fed.”

Geithner, whose net worth was a comparatively meager “$239,000 to $6 million” when he left office in 2013, was “concerned with worsening the perception of mistrust that many Americans feel toward government and Wall Street,” according to CNBC.

The topic of rising inequality still inspired yucks and backslapping in late 2015 when Geithner got together with Rubin and another former Treasury Secretary — the super-rich Hank Paulson, a former Chairman and Chief Executive Officer of Goldman Sachs. Paulson, who served as the Bush Administration’s Treasury Secretary from 2006-2009, played a key role in looking the other way heading into the crash, and then set the bailout in motion after it.

Like other former Treasury secretaries, Paulson’s profitable pass into public service paid off. He had to liquidate nearly $500 million in Goldman stock to avoid potential conflicts of interest as Treasury Secretary. A tax loophole designed to “incentivize” people leaving business for public service exempted him from paying capital gains taxes on that windfall. He’s now worth $700 million.

It just goes to show that Timothy Geithner as well as current Treasury Secretary Jack Lew and future denizens of the Treasury Department have long and profitable futures ahead of them. Like so many financialized “public servants” before them, they’ll be laughing all the way to the bank … and back again.

2 comments for “Geithner Gets Morgan-Chase Gravy”