Whatever one thinks about Hillary Clinton’s sincerity when she professes progressive values, the undeniable reality is that she has immersed herself for decades in the corrupting sludge of Official Washington and its sleazy pay-for-play schemes with Wall Street and other power centers, as JP Sottile explains.

It was supposed to be a feel-good moment. The Chairman and CEO of the world’s most powerful financial institution dropped by CNBC’s Squawk Box to crow a bit about his recovery from cancer. But it didn’t quite go the way Lloyd Blankfein, or Hillary Clinton, might’ve wanted.

First, the recently-minted billionaire boss of Goldman Sachs compared his 600 hours of chemotherapy to dropping “napalm” on the Islamic State (“You get ISIS, but you also get some of the Kurds and Iraqis and everybody else”). Lloyd went on to tell Andrew Ross Sorkin that unlike another notable, newly-minted billionaire, fellow cancer survivor and comparably-connected JPMorgan Chase CEO Jamie Dimon, his brush with mortality didn’t really inspire circumspection about his life or about his crucial role in the profitable business of giving other people the business (“I must be so thick, I missed that whole thing”). 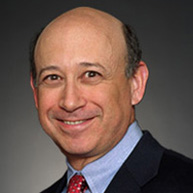 And then Lloyd revealed that Hillary Clinton isn’t the only one “feeling the Bern.” The remarkably unreflective Blankfein said the anti-Wall Street sentiment fueling Sen. Bernie Sanders’s insurgent campaign represented a “dangerous moment” for Wall Street and, by extension, for America. In that revealing moment of truth, Blankfein’s blurb not only encapsulated Wall Street’s growing discomfort with the surging candidacy of, as Blankfein put it, “another kid from Brooklyn,” but it also exposed Wall Street’s lingering detachment from the costly outcomes of its free-wheeling actions.

And it didn’t do Hillary any favors, which is something new for Goldman Sachs. Lloyd unintentionally poured gasoline into an already white-hot news cycle that’s raced out of Hillary’s control. And it further reinforced Bernie’s case that Hillary, the former Senator from Wall Street, is just too closely linked to the “rigged economy” to actually reform it.

But perhaps the most interesting part of Lloyd’s warning centered on his concerns about the post-election political landscape and his sense that the real danger is not people with pitchforks taking to the street. Rather, Lloyd is worried that Washington’s political machine could stall if all that public anger hampers politicians by turning a demonstrated willingness to “compromise” into a political liability. And when Wall Streeters talk about “compromise,” they are referring to their seemingly innate ability to manufacture bipartisan consent in spite of the often-bemoaned acrimony that locks up Republicans and Democrats.

For example, the two big post-Crash bailouts were built on exactly this type of compromise. And yes, there were two bailouts. There was the highly-visible, widely-reported $700+ billion Troubled Assets Relief Program (TARP). But there was also a host of “other,” often-secret bailouts and programs that may cost somewhere around $4 trillion to $7.7 trillion or, according to one accounting, as high as $16.8 trillion. Most Americans are unfamiliar with those side-deals built on Washington’s reliable willingness to compromise with Wall Street.

Another good example is the often-criticized and wholly-overrated Dodd-Frank law that was ostensibly designed to “rein-in” the “excesses” of Wall Street. Instead, it seems to have acted like an accelerator. Less than two years after Dodd-Frank was signed into law on July 21, 2010, Bloomberg Business reported that just five banks, JPMorgan Chase, Bank of America, Citigroup, Wells Fargo, and Goldman Sachs, saw their assets spike to $8.5 trillion. That equaled a staggering “56 percent of the U.S. economy.”

Like a magic trick, they saw their assets rise 13 percent during a post-Crash crisis that, according to the Treasury Department, simultaneously eliminated $19.2 trillion in household wealth.

By 2015, the top five banks, JPMorgan Chase, Bank of America, Wells Fargo, Citigroup and U.S. Bancorp, were down to $7 trillion for a 44.61 percent share of the banking industry, according to a CNBC report. But that dip may have more to do with switching-out of US Bancorp ($398.98 billion in assets) for Goldman Sachs ($880.56 billion in assets) than it does with the constrictive power of Dodd-Frank.

But Dodd-Frank did constrict community banks. A Harvard Business School study found that the law’s costly, labyrinthine compliance system, which the big banks helped to write, essentially completed a two decade-long process of killing off community-level lending. Oddly enough, it also opened-up those local lending markets to the big, well-connected players listed above.

As a result, community banks assets declined 19 percent since 2010, community-level lending “has fallen by half, from 41 percent to 22 percent” and “the share handled by large banks more than doubled from 17 percent to 41 percent,” reported the Fiscal Times.

Most telling, though, is that during Dodd-Frank’s crucial “rulemaking” phase, when the Congressional prose turns into Executive regulations, revolving-door regulators wrote the law’s actual, functional rules in collaboration with the very bankers and financiers Dodd-Frank was meant to contain in the first place. And now Congress has begun to dismantle this already compromised law with, for example, a new law relaxing its “restrictions” on derivatives.

It’s yet another triumph of political “compromise” for Wall Street. These “compromises” don’t come cheaply, though. According to OpenSecrets.org, Goldman Sachs spiked its yearly lobbying budget from $2.8 million in 2009 to $4.6 million in 2010, when Dodd-Frank was being assembled in Congress. And $3.4 million is their lowest annual total spent since the law was passed. Overall, the financial industry has spent a hefty $3.25 billion on Dodd-Frank-related finagling.

This is how the interests of Wall Street somehow slide right through the system, while other issues get inexorably stuck in Washington’s infamous gridlock. It’s the cash that lubricates the system, much like oil lubricates American foreign policy. And it’s exactly the kind of “willing to compromise” political pliability that Blankfein told Squawk Box he is afraid of losing if recalcitrant politicians like Bernie Sanders take over the system.

Bernie’s unprecedented pull of small donations empowers him to eschew this type of compromise and even go so far as to propose breaking up “too big to fail” banks like Goldman Sachs. On the other hand, mounting evidence shows that Hillary Clinton was all-too willing to compromise on the way to her multi-million-dollar career as a well-paid progressive who, as she likes to say repeatedly, “gets things done.”

Perhaps that’s why the two-time presidential hopeful was a consistent favorite of Lloyd and the Goldman gang, as evidenced by the oodles of cash they’ve lavished on her simply for the not-too-rare honor of listening to the dulcet tones of her Kissinger-inspired reflections on the state of the world.

According to Politico, however, the former Secretary of State sounded a lot more like “a Goldman Sachs managing director” than a foreign policy wonk when she spoke in front of “Goldman Sachs executives and technology titans at a summit in Arizona in October of 2013.”

Like Hillary’s other speeches, the actual transcript has yet to be released and, based on the sparse recollection of Politico’s unnamed source, there is nothing particularly incriminating about her “rah-rah” speech celebrating Goldman’s greatness. But the appearance of the $225,000 speech, or as consultants in the political business call it, “the optics”, is becoming ever-more problematic as the long-overdue post-2008 backlash propels the campaign.

Now she’s forced to repeatedly reassure post-Ponzi Scheme America that she’s never done any favors in exchange for the speaking fees or for the $163 million she’s already raised to run for President. During a Feb. 4 debate on MSNBC, former Secretary Clinton counter-attacked Sen. Sanders with the charge that his campaign employs “artful smears” that “insinuate” she could be bought with mere money.

Said Clinton, “You will not find that I ever changed a view or a vote because of any donation that I ever received. I have stood up and I have represented my constituents to the best of my abilities, and I’m very proud of that.”

But that’s the problem with the speaking fees and, truth be told, it’s the most vexing part of what passes for payola in the two-party political racket. Most of the juiciest rewards come after service is rendered, not before.

Although campaign donations and Super PAC slush funds are a great way for corporate interests to open doors to access and reward a candidate’s family and friends and ancillary business interests, the real action happens in-between stints of public service or, even better, after a seasoned pro leaves “public service” to utilize those “special insider skills” on the other side of one of a dozen revolving doors between the Beltway and a bevy of businesses and lobbying firms.

The system is not really pay for play. It’s you’ll get paid for how you played when you dutifully collected a “low” six-figure salary while toiling away in Congress or in the Executive branch. So, technically speaking, Hillary may be telling the truth. Maybe she never once changed a vote in exchange for the titanic sums of cash which, according to a new report on CNN, amounted to “$153 million in paid speeches [to her and former President Bill Clinton] from 2001 until Hillary Clinton launched her presidential campaign last spring.”

But the sad fact is that she, like so many of the Beltway’s increasingly wealthy class of revolving doormen and women, never really had to change a vote. Of course, that’s putting aside Sen. Elizabeth Warren’s telling tale about a bankruptcy bill that she’d successfully convinced then-First Lady Hillary Clinton to oppose until she got into the Senate and then switched sides to the less forgiving debt collecting preferences of the Credit-Industrial Complex.

But other than that, when Hillary was serving the public and Bill was lording over the Clinton Foundation, she was simply simpatico with her donors. They were her constituents. She, like the “Establishment” of both parties, didn’t have to think twice about it. She just knew.

And once she left public service, the former First Lady and former Senator and former Secretary of State was rewarded with speaking fees from Goldman that topped $600,000 in just one year and often hit a robust $335,000 per engagement. And, as detailed by CNN, the rewards also came from Bank of America and UBS and Morgan Stanley and Citigroup and Deutsche Bank and, of course, from the aforementioned Goldman Sachs.

Which explains why Lloyd Blankfein is so darned concerned about the “dangerous” potential loss of “political compromise” should one of two, yes, two, stringless candidates end up capturing the White House and, perhaps, end up stoking a larger, national political shift.

Just imagine what the securities and investment industries, who’ve given $17.2 million to Hillary’s campaign and $34.5 million to Jeb Bush’s campaign, are thinking now that Bernie Sanders and Donald Trump are picking up steam by tapping into the same deep well of anger.

All that political bet-hedging and bankrolling and Super PAC’ing won’t amount to a hill of beans if the American people end up choosing between someone who really doesn’t want their money and someone who simply doesn’t need it.