The twin explosions of post-9/11 national security extravagance and Citizens United political spending bonanza have reshaped Washington — not only in its political outlook but physically, with this New Class preferring lavish McMansions to show off their newfound wealth, as Mike Lofgren describes.

In 1927, H.L. Mencken rode by train through the Pennsylvania coal country. The houses he saw along the way were so hideous, at least in his eyes, that he was moved to pen his famous essay, “The Libido for the Ugly.” Mencken was writing about towns inhabited by coal miners and railroad brakemen, but what would he say if he were to visit present-day Washington, DC and take a stroll in its surrounding suburbs?

I’d bet the Sage of Baltimore would direct his limitless venom at the spanking-new particle-board McMansions of Washington’s New Class: the K Street lawyers, political consultants, Beltway fixers and war on terrorism profiteers who run a permanent shadow government in the nation’s capital. 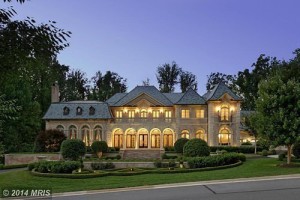 This group does not include federal employees or most elected officials. With their statutorily limited salaries, they cannot afford the bloated monstrosities favored by the New Class. Modest developments like Fairlington or the humble cape cods, ramblers and four-squares of Arlington were built for them in the early post-World War II heyday of the federal bureaucrat.

There is talk of a Georgetown elite, but ever since Pamela Harriman’s death in 1997, that crowd has been as defunct as the Romanov dynasty. Georgetown has elegant but cramped townhouses with creaky floorboards, inadequate wiring and an aura of ever-so-slightly shabby gentility. Who needs that when you can buy a brand-new 12,000 square foot McMansion with cast stone lions guarding the front gate, a two-and-a-half story tall great room and a home cinema with built-in FSB ports?

If that sounds more like the jumped-up suburb of a Sunbelt city like Houston or Atlanta than the traditional, old-money atmosphere of Beacon Hill or the Philadelphia Mainline, it is because that is precisely what the neighborhoods of the new establishment have become.

Up the George Washington Parkway in Virginia, across the Potomac from Georgetown lies McLean, where a new elite first began migrating in the late 1970s on former pasturage near the CIA’s headquarters. In time McLean became the mecca of the moneyed new class: some Democrats (mega-fundraiser and Virginia Gov. Terry McAuliffe is one such resident, as is Zbigniew Brzezinski), but predominantly they are Republican operatives of the better-heeled sort: consultants, lobbyists, lawyers, fundraisers, pollsters and the occasional venture capitalist. The roster includes such luminaries as Colin Powell, Newt Gingrich and GOP Ã¼ber-lobbyist Ed Rogers.

McLean is also desirable real estate for executive-level contractor personnel, whose work is ostensibly the technocratic administration of national security programs, but who in practice constitute part of a distinctive American political class.

All of these people a select few politicians, their handlers, lobbyists and contractors are much the same as the political new class that Yugoslavian dissident Milovan Djilas wrote about in 1957 when he described the rising Communist Party bureaucracy as a clique of self-interested strivers who had become a privileged group enjoying great material benefits from their positions.

Back across the Potomac River from McLean lies the similarly well-heeled commuter dormitory of Potomac, Maryland. It is politically more evenly divided than McLean, with roughly equal parts Democrats and Republicans, but the social dynamic remains much the same.

Both suburbs are the residential headquarters of emergent class of Beltway operatives who do well by doing good for their clients and shareholders if not the country.

Further west of Washington, almost in the shadow of the Blue Ridge Mountains, lies Loudoun County. Loudoun is per capita the richest county in the country as well as one of the most Republican and is something of a world headquarters of the McMansion as lifestyle statement. It is in this outer-suburban, more rural county, which used to be Virginia’s hunt country, that executives of Beltway Bandit firms, totally dependent on the federal government for their livelihoods, can pretend to lead the life of a free Jeffersonian squirearchy.

The burgeoning New Class is determined to transform the rest of the Washington metropolitan area into a replica of McLean or Loudoun. My own neighborhood of Fort Hunt still retains its 1950s “Leave It to Beaver” atmosphere, but on its fringes, closer to the views of the Potomac, the great transformation is taking root.

The properties there were allotted in the 1920s, and a surprising number of the houses are quite modest in scale. Or were, until a few years ago: one by one, they are being razed. In their place have arisen the stereotypical McMansions that have irrupted across the country in eczematous patches ever since the savings and loan deregulation of the early 1980s.

The structures resemble the architecture of the Loire Valley, Elizabethan England, or Renaissance Tuscany as imagined by Walt Disney, or perhaps Liberace. As with McMansions everywhere, the new owners could have gotten a much sounder design for the same price or less, but they prefer the turrets, porte-cochÃ¨res and ill-proportioned Palladian windows that they bought, and accent the whole monstrous ensemble with the obligatory Range Rover in the driveway.

It tells one something about the raw, nouveau-riche tastes of the contractors, lobbyists and corporate lawyers who make up the New Class that they seem to possess a demonic lust to leave their mark on whole neighborhoods like Shelley’s Ozymandias proclaiming “Look on my works, ye Mighty, and despair!”

One especially pretentious Ã¼ber-McMansion a mile north of me attempts to emulate Citizen Kane’s Xanadu not only in scale, but in hermit-like spirit: surrounding the structure is a forbidding masonry wall whose massive wrought iron front gate is secured with a ship’s anchor chain and a huge padlock. Evidently, Mormon canvassers and aluminum siding salesmen are not welcome.

Often where a perfectly good house, a spacious 1950s ranch of 2500 square feet or so, is perched on an ample lot, a developer will tear it down and erect not one but two New Class mausoleums on the same plot. Since they cannot be very wide, they resemble New Orleans shotgun shacks: narrow and extremely deep, but on a gargantuan scale. In order to obtain the seemingly mandatory 5000 square feet of interior space each, they are obliged to build upward, which increases the appearance of disproportion. The effect is that of a domino placed on its side.

Since these freakish contrivances are built as close to the property line as the law allows even as they strive heavenward like the Tower of Babel, disputes with the neighbors are inevitable.

For those unfortunate enough to live beside them, it is like having a Carnival Cruise liner beached on the adjoining property. But since the eyesore’s owner is probably arguing as part of his day job that rodent hair in cereal is part of a balanced breakfast, he is unlikely to be moved by the whining of neighbors over subjective issues like quality of life or privacy.

In other places where the New Class congregates, like San Francisco or New York, the same dynamic applies. Not just the poor, but even middle-class people are being squeezed out: when long-time residents die or empty nesters move out, the house is torn down and a vastly more expensive one replaces it. The process not only inflates prices for new housing, it relentlessly subtracts from the existing stock of more affordable residences.

It is common knowledge that Wall Street and its inflated compensation packages have remade Manhattan into an exclusive playground for the rich, just as tech moguls have made San Francisco unaffordable for the middle class. It is less well known that the estimated $4 trillion spent since 9/11 on the war on terrorism and billions spent on political campaigns ($6 billion on the 2012 elections alone) have trickled down so extravagantly to the New Class settled around Washington’s Beltway that they have remade the landscape of our capital.

The process symbolizes the transformation of Washington in the era of Shock and Awe and Citizens United. It’s just a pity the beneficiaries have such horrible taste.

Mike Lofgren is a former congressional staff member who served on both the House and Senate budget committees. His book about Congress, The Party is Over: How Republicans Went Crazy, Democrats Became Useless, and the Middle Class Got Shafted, was published in paperback in 2013. His new book, The Deep State: The Fall of the Constitution and the Rise of a Shadow Government, was published in January 2016. He has appeared several times as a guest on Moyers & Company. [This article previously appeared at http://billmoyers.com/story/washingtons-libido-for-the-ugly/]

← The Meaning Behind the Sanders Surge
In Case You Missed… →