Exclusive: Because he had commanded Allied forces in World War II, President Eisenhower understood the excesses of the war industry and warned Americans about the dangers of the military-industrial complex, a force that continues to siphon off tens of billions of tax dollars, as Jonathan Marshall explains.

America’s military procurement machine may be the single most successful system of wealth transfer ever devised, moving tens of billions of dollars every year from ordinary taxpayers into the pockets of big defense contractors and their allies in Congress. But as a provider of working equipment to defend the United States against realistic threats, it is becoming more and more dysfunctional with every passing year.

Current administration plans call for spending a trillion dollars over the next 30 years to “modernize” America’s nuclear arsenal to fight a pointless war that would decimate major centers of civilization across the globe. [See Consortiumnews.com’s “Learning to Love, and Use, the Bomb”] 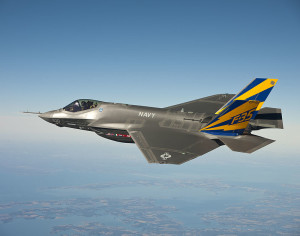 The U.S. Navy variant of the F-35 Joint Strike Fighter in a test flight over the Chesapeake Bay. [Defense Department photoe]

At the same time, the Pentagon is also asking for even greater sums to modernize conventional weapons systems that are better suited to East-West conflict scenarios of the 1950s than to today’s skirmishes with insurgents in the Middle East, Asia, and Africa.

Spending on major military acquisition programs is projected to soar 23 percent, after adjusting for inflation, from fiscal year 2015 to 2022. Worse yet, Congress and the administration are spending much of that money on weapons that don’t even work as advertised.

One of the biggest drivers of new procurement spending today is the F-35 Joint Strike Fighter jet. The plane is too expensive and sophisticated for simple bombing runs in Syria or Afghanistan, but too crippled to use in dogfights against Russia’s or China’s most advanced fighters. It’s ideal for one purpose only: With a total projected program cost of more than $1 trillion, this program will keep Lockheed Martin and its subcontractors in 46 states afloat for at least the next two decades.

The F-35 program was awarded more than $12 billion in the omnibus spending bill that passed Congress in December for fiscal year 2016. That money is slated to buy 68 planes, up from 44 purchased in fiscal 2015. Over the entire life of the program, the Pentagon expects to acquire more than 2,400 jets.

The F-35 program has suffered countless ills since 2001. In the words of the New York Times, “The project is seven years behind schedule, costs have soared, and eyebrows arched higher after a prototype was outmaneuvered by an older F-16 in a mock dogfight early last year.”

Critics note that the plane has been grounded because of safety, software or other technical issues, including jets catching fire on the runway, 13 times since 2007. The latest glitch is an over-weight helmet, costing $400,000 a pop, which can cause fatal whiplash for some pilots. Until it is redesigned, pilots weighing less than 136 pounds are grounded.

As of last year, the same helmet was still unable to let pilots distinguish friendly aircraft from foes, a rather critical capability when they are shooting at blips on a radar screen beyond visual range. The stability of the planes’ engines was rated “extremely poor” and other key systems were unreliable as well.

“At best . . . we will be launching an unstable plane that cannot perform many of its core missions for years,” said Rep. Jackie Speier, a California Democrat, last summer. “At worst, it’ll hurt people or we’ll ground it in the hangar and spend billions on a retrofit.”

A test pilot who flew the F-35 in mock air battles in January 2015, against an older (and much cheaper) F-16D, reported that the newfangled jet was incapable of outmaneuvering the F-16 in a dogfight. That was true even though the test was rigged by making the F-16 carry heavy extra fuel tanks to slow it down.

The F-35’s builders have proven their superiority at political firepower, however. The Center for Responsive Politics reported that in 2014 the plane’s main contractor, Lockheed Martin, forked over $4.1 million in campaign contributions, supplemented by $7.6 million in contributions from three subcontractors: Northrop Grumman, United Technologies, and BAE. Their money poured into members of the House Armed Services Committee, House Appropriations Committee and Senate Appropriations Committee, as well as Senate Majority Leader Mitch McConnell of Kentucky.

The F-35 isn’t the only dysfunctional weapons procurement program draining money today. Its predecessor, the F-22, proved to be an expensive dog, suffering a critical failure after every 1.7 hours of flight, on average. Although first flown in 1997, it was not allowed into combat until 2014, on a mission over Syria.

Or take the Navy’s Littoral Combat Ship. Designed for missions close to shore, it has an experimental aluminum hull that may be vulnerable to rough seas and melt at high temperatures (such as caused by a missile or bomb strike). No one will know for sure until at least 2018, but in the meantime, 24 ships have been built or are under construction. Defense Secretary Ashton Carter has asked for cutbacks in the program, but the Navy is in open revolt.

But don’t applaud the Pentagon’s civilian leadership too quickly for challenging the Navy. Carter reportedly wants to use some of the savings from the ship program to buy more F-35 fighter jets.

25 comments for “Feeding the Military-Industrial Complex”