Sam Parry has received the “Gary Webb Freedom of the Press” award in recognition of Sam’s central role in creating Consortiumnews.com as the first investigative news magazine based on the Internet. The award was granted by the Board of Directors of the Consortium for Independent Journalism as part of the site’s 20th anniversary.

In 1995, Sam was the original architect of the Web site, building it from the ground up at a time when the Internet was still in its infancy and there were no convenient templates or easy-to-use how-to guides. Sam mastered how to write HTML code and scripts and how to implement them online. Though not a “techie,” Sam demonstrated great persistence, patience and dedication in bringing this unique Web site to the public.

Journalist Robert Parry recalled how one day in 1995, after getting hold of “secret” and “top secret” documents from a congressional investigation into clandestine contacts between senior Republicans and Iranians dating back to 1980, he was frustrated by the disinterest that he encountered from mainstream news outlets. 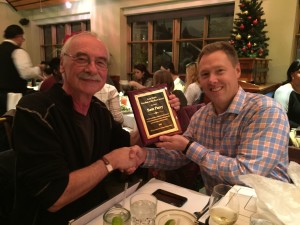 “I was complaining about this dilemma when my oldest son Sam, who had just finished college, said there was this thing called the Internet where you could create a thing called a Web site where you could publish the articles and the documents,” Robert Parry said. “At the time, I had only the faintest idea what the Internet was. But Sam took the lead in figuring out how to build the Web site. Without Sam, it couldn’t have happened.”

In the two decades since, as Internet technology evolved, Sam, now 42, remained active in upgrading and designing the site into its present form. He also contributed a number of articles about the growing global environmental crisis, the crucial issues at stake in the pivotal Election 2000, and President George W. Bush’s fallacious case for war with Iraq in 2002-03. (Sam was a co-author of Neck Deep: The Disastrous Presidency of George W. Bush.)

The award stated, “Without his hard work, Consortiumnews.com and much of the important journalism that it has produced might well never have reached the public. We are indebted to Sam for his creative idea and diligent execution, thinking outside the box and experimenting with what was then a brand new medium the Internet.

“It is therefore with the deepest gratitude and appreciation that we grant Sam Parry the ‘Gary Webb Freedom of the Press’ award for his invaluable contribution to the creation of Consortiumnews.com, to the telling-of-truth, and to the betterment of the planet.” (The Consortium for Independent Journalism is the non-profit that publishes Consortiumnews.com.)

The new award is named in honor of the late investigative reporter Gary Webb, who revived the Nicaraguan Contra-cocaine scandal in the mid-1990s and faced extreme hostility from the major U.S. newspapers that had ignored or dismissed the scandal when it first surfaced in the 1980s.

Rather than join Webb in finally exposing the depths of the Reagan administration’s collaboration with Contra drug traffickers, the mainstream media destroyed Webb’s reputation and career, a shameful campaign that continued even after the CIA’s Inspector General admitted that the spy agency knew of the drug smuggling but chose to protect its clients rather than turn them in.

For Webb, the consequences for his courageous reporting were severe. He was driven out of mainstream journalism and made essentially unemployable in his profession. Unable to find decent-paying work and shunned by many of his former colleagues, Webb took his own life in 2004. Webb’s ordeal was recounted in a book and movie, both named “Killing the Messenger.”

[For more background on Gary Webb, see Consortiumnews.com’s “A Day When Journalism Died” and “The Sordid Contra-Cocaine Saga.”]