Exclusive: Dec. 9 has a grim meaning for the Republic, the date in 2004 when investigative reporter Gary Webb, driven to ruin by vindictive press colleagues for reviving the Contra-cocaine scandal, took his own life, a demarcation as the U.S. press went from protecting the people to shielding the corrupt, writes Robert Parry.

Looking back over my four decades in the national news media, it’s hard to identify one moment when American journalism died. The process was a slow and ugly one, with incremental acts of cowardice accumulating until mainstream reporters were clearly part of the problem, not anything to do with a solution. But the date Dec. 9 has a special place in that sad progression.

It was on Dec. 9, 2004, when the mean-spirited mainstream media’s treatment of investigative journalist Gary Webb led him his career devastated, his family broken, his money gone and his life seemingly hopeless to commit suicide. It was a moment that should have shamed all the big-shot journalists who had a hand in Webb’s destruction, but it mostly didn’t. 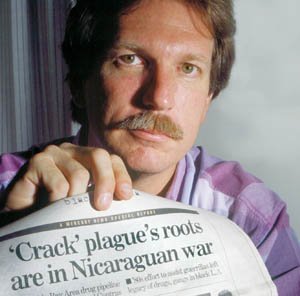 Journalist Gary Webb holding a copy of his Contra-cocaine article in the San Jose Mercury-News.

Webb’s offense was to have revived the shocking story of the Reagan administration’s tolerance of cocaine smuggling by the CIA-backed Nicaraguan Contra rebels in the 1980s. Though the scandal was real and had been partly exposed in real time the major newspapers had locked arms in defense of President Ronald Reagan and the CIA. The sordid scandal apparently was deemed “not good for the country,” so it was buried.

My Associated Press colleague, Brian Barger, and I had written the first story exposing the Contras’ involvement in cocaine smuggling in 1985, but our story was attacked by Reagan’s skillful propaganda team, which got The New York Times and other major news outlets to buy into the denials.

Later that decade, a gutsy investigation by then-Sen. John Kerry filled in some of the gaps showing how the Reagan administration’s collaboration with drug-tainted airlines and other parts of the Contras’ cocaine smuggling apparatus had functioned. But Kerry’s probe was also mocked by the major media. Sniffing out that conventional wisdom, Newsweek deemed Kerry “a randy conspiracy buff.”

Kerry’s brush with this near-political-death-experience over the Contra-cocaine scandal taught him some hard lessons about survival in Washington, which help explain why he was such a disappointing candidate during Election 2004 and why he has shown such timidity in challenging Official Washington’s “group thinks” as Secretary of State.

For both U.S. journalists and politicians, there was no upside to doing the hard work of exposing this kind of crime of state. [See Consortiumnews.com’s “What’s the Matter with John Kerry.”]

In 1996, Gary Webb encountered the same stonewall when he stumbled onto evidence showing that some of the Contra cocaine, after being smuggled into the United States, had flowed into the production of “crack” cocaine in Los Angeles and contributed to the “crack epidemic” of the 1980s.

When he published his findings in a series for the San Jose Mercury News, the major newspapers had a choice: either admit that they had slinked away from one of the biggest scandals of the 1980s or redouble their efforts to discredit the story and to destroy anyone who dared touch it. They went with option two.

In a tag-team pummeling of Gary Webb, The Washington Post, The New York Times and the Los Angeles Times all denounced Webb and decried his reporting. Soon, Webb’s editors at the Mercury News were feeling the heat and rather than back their reporter, they sought to salvage their own careers. They sold Webb out and he was soon out of a job and unemployable in the mainstream media.

The bitter irony was that Webb’s reporting finally forced a relatively thorough and honest investigation by the CIA’s Inspector General Frederick Hitz, who concluded in 1998 that not only were the Contras involved in the drug trade from their start in 1980 and through the entire decade but that CIA officers were aware of the problem and helped cover it up, putting the goal of ousting Nicaragua’s Sandinista government ahead of blowing the whistle on these corrupt CIA clients.

Yet, even the CIA’s confession wasn’t enough to shame the major newspapers into admitting the truth and acknowledging their own culpability in the long-running cover-up. It remained easier to continue the demonization of Gary Webb.

At Consortiumnews, we were one of the few news outlets that examined the extraordinary admissions contained in the CIA’s two-volume report and in a corresponding Justice Department Inspector General’s report, which added more details about how criminal investigations of the Contras were thwarted. But, sadly, we lacked the reach and the clout of the major newspapers.

As the controversy bubbled in 1996, I also had joined with Webb in several speaking engagements on the West Coast. Though we sometimes spoke to large and enthusiastic crowds, the power of the Big Media overwhelmed everything, especially the truth. [For details, see Consortiumnews.com’s “The Sordid Contra-Cocaine Saga.”]

In the years after the Contra-cocaine story was buried once again, I lost touch with Webb who had landed a job with a California state legislative committee. So, I didn’t realize that after that job ended, Webb’s life was spiraling downward. Even modest-sized newspapers refused to consider hiring the “disgraced” reporter.

Webb’s marriage fell apart; he struggled to pay child-support and other bills; he was faced with a forced move out of a house near Sacramento, California, and in with his mother. Deeply depressed, according to his family members, Webb chose to end his life.

On Dec. 9, 2004, the 49-year-old Webb typed out suicide notes to his ex-wife and his three children; laid out a certificate for his cremation; and taped a note on the door telling movers, who were coming the next morning, to instead call 911.

Webb then took out his father’s pistol and shot himself in the head. The first shot was not lethal, so he fired once more. (Yes, I know that conspiracy theorists have seized on the two shots to insist that Webb was murdered by the CIA, but there is no proof of that and by pushing that baseless account, people simply let the real culprits the big newspapers off the hook.)

After Webb’s body was found, I received a call from a reporter for the Los Angeles Times who knew that I was one of Webb’s few journalistic colleagues who had defended him and his work. I told the reporter that American history owed a great debt to Gary Webb because he had forced out important facts about Reagan-era crimes. But I added that the Los Angeles Times would be hard-pressed to write an honest obituary because the newspaper had essentially ignored Hitz’s final report, which had largely vindicated Webb.

To my disappointment but not my surprise, I was correct. The Los Angeles Times ran a mean-spirited obituary that made no mention of either my defense of Webb, nor the CIA’s admissions in 1998. The obituary was republished in other newspapers, including The Washington Post.

Even though Webb’s reputation posthumously received some rehabilitation with a sympathetic portrayal of his ordeal in Jeremy Renner’s 2014 movie, “Kill the Messenger,” some news executives who aided the Contra-cocaine cover-up in the 1980s and abetted the destruction of Webb in the 1990s still won’t admit their complicity in suppressing one of the most important stories of that era, people such as The Washington Post’s Jeff Leen and Leonard Downie. [See Consortiumnews.com’s “WPost’s Slimy Attack on Gary Webb and “How the Washington Press Turned Bad.”]

A few journalists have continued to find nuggets of the Contra-cocaine scandal, including from accounts by former CIA contract pilot Robert “Tosh” Plumlee, who supplied details about his work ferrying guns and drugs for Reagan’s Contras, as reported by John McPhaul of The Tico Times, based in San Jose, Costa Rica. Even Fox News poked into the Contra-cocaine connection in an article about alleged CIA complicity in the 1985 torture-murder of Drug Enforcement Administration agent Enrique “Kiki” Camarena.

But the resistance from the major U.S. news media and the ferocity from Reagan’s acolytes whenever their hero’s legacy is challenged have left this very real scandal in the netherworld of doubt and uncertainty, a key chapter of America’s Lost History in which Dec. 9, 2004, conveys a baleful message.

[As part of our end-of-year fund drive, Consortiumnews is offering a DVD of “Kill the Messenger” and a CD of Webb and Parry speaking about the Contra-cocaine scandal in 1996. For details on this special offer, click here.]

21 comments for “A Day When Journalism Died”