A favorite talking point of Official Washington is that Syrian President Assad is “a magnet for terrorism” who thus must be removed, but that’s a line not stuck on other leaders who are attacked by terrorists. A more sober assessment would see Assad as a necessary part of a solution, says Lawrence Davidson.

Here is the situation in Syria as I see it: Russia is taking a long-range view and wants stability in post-ISIS Syria. France and the United States are taking the short-range view and really have no achievable plans for Syria’s future stability. Turkey appears to have given little thought to Syria’s future. Ankara may be willing to see indefinite chaos in Syria if it hurts the Assad regime on the one hand and the Kurds on the other.

The Russians may be the only party interested in the long-term political stability of Syria. There is certainly no doubt that President Vladimir Putin is more determined than Western leaders to act on the fact that the various so-called “moderate” parties standing against the Assad regime cannot work together and that this fault cannot be corrected by enticements from the United States. For the Russians, this fact makes the Damascus government the only source of future stability. 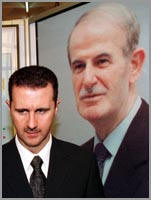 Syrian President Bashar al-Assad before a poster of his late father, Hafez Assad.

This understanding, and not Soviet-era nostalgia, has led Russia to support President Bashar al-Assad’s regime, which possesses a working government, a standing army, and the loyalty of every religious minority group in the country.

Some might object that both Assad and Putin are “dictators” and “thugs” (by the way, “thugs in suits” in the U.S. government are all too common). But this cannot serve as a serious objection. The only alternative to Damascus’s victory is perennial civil war fragmenting the country into warlord zones. With the possible exception of Israel, this scenario is in no one’s interest, although it seems that the leaders of in Washington and Paris are too politically circumscribed to act on this fact.

Thus, it would appear that neither the U.S. nor France really cares about Syria as a stable nation. Once the present military capacity of ISIS is eliminated, Washington and Paris may well clandestinely continue to support a low-level civil war against the Assad regime. In this effort they will have the help of Turkey, the Kurds and Israel. The result will be ongoing decimation of the Syrian population and fragmentation of its territory.

As if to justify U.S. strategy, President Barack Obama, with French President Francois Hollande by his side, recently  boasted that the United States stood at the head of a “65-country coalition” fighting terrorism in Syria. But this is a hollow claim. Most of these countries are coalition members in name only and some of them, like Saudi Arabia and the Gulf state governments, play a double game. And then Obama dismissed Russia and Iran as “outliers” and “a coalition of two.” Yet those two countries are the Syrian nation’s best hope for future stability.

The fact is that U.S. policy in Syria has been a losing proposition from the beginning just because of its hostility to the Assad government. Despite its air campaign against ISIS, Washington has no ground component nor any answer to the political vacuum in Syria. Both missing parts are to be found in an alliance with Damascus.

Refusal to make that alliance has also opened Washington to building neoconservative political pressure to increase U.S. military presence in the area. But American “boots on the ground” in Syria is both a dangerous option as well as an unnecessary one. Syrian government boots can do the job if they are properly supported. The support has come from Russia, Iran and Hezbollah. It is the United States and its coalition who are the “outliers.”

It is not easy to explain Turkey’s animosity toward Damascus. Prior to the civil war in Syria, the two countries had good relations. Then something changed. It may have been something as foolish as President Recep Tayyip Erdogan’s taking personal offense against President Assad because the latter chose to heed the advice of Iran rather than Turkey at the beginning of the war. Whatever happened, it sent Ankara off on an anti-Assad crusade.

That anti-Assad mindset is probably the back story to the recent reckless Turkish decision to shoot down a Russian warplane operating in support of Syrian government troops close to the Turkish border.

The Turks say the Russian jet strayed into Turkish airspace. The Russians deny this. The Turks claim that they tried to communicate with the Russian plane to warn it away. When it did not respond, they destroyed it.

Of late Turkish Prime Minister Ahmet Davutoglu has said Ankara “didn’t know the nationality of the plane that was brought down until Moscow announced it was Russian.” This statement is frankly unbelievable given that Davutoglu followed it up with an admission that Turkey had complained to Russian about military flights in this exact border area. He also asserted that both Russian and Syrian operations in this region of northern Syria should stop because ISIS has no presence there. This assertion makes no sense, since Damascus’s aim is to reassert government authority by the defeat of armed rebels regardless of their organizational affiliation.

It is hard to say whether the Turks are telling the truth about an incursion into their airspace. Most of their evidence, such as recorded Turkish warnings to the Russian plane, is easily fabricated. However, in the end it does not really matter if the plane crossed the border. There was no need to shoot it down.

If the Russian jet strayed into Turkish airspace, there would have been a range of options. The Turks could be very sure that the Russian plane had no hostile intention toward their country, and they should have assumed, for the sake of minimizing any consequences, that no provocation was meant on the part of the Russia.

In other words, the Turks should have acted as if the alleged over-flight was a mistake. The Turks could have then shadowed the Russian plane in a way that coaxed it back into Syrian airspace and followed the incident up with a formal protest to Moscow. Instead they made the worst possible choice and shot the plane down. Now both Ankara and Washington are shouting about Turkey’s right to defend its territory despite the fact that the Russian plane never posed any threat.

In all of the bloodshed, population displacement and terror that has accompanied the Syrian civil war, the least-considered party has been the Syrian people and their future. ISIS, or at least its present infrastructure, will ultimately be destroyed. However, while that destruction is necessary, it is an insufficient outcome because it fails to provide long-term stability.

Right now that vital ingredient can only be supplied by the reimposition of order by Damascus. The folks in Washington, Paris and Ankara might not like that, but they are not the ones facing a future of anarchy. And indeed, the more they stand in the way of Damascus, the more chaos they will help create.

← The Collision Course in Syria
Avoiding the Trap of Retaliation →

10 comments for “Is Assad Part of a Solution?”