The Paris terror attacks brought demands for retaliation against the Islamic State, which claimed responsibility, but by lashing out against the group in Syria and Iraq the West may be falling into a trap that will only strengthen the terrorists, writes John V. Whitbeck.

For French President FranÃ§ois Hollande, the attacks in Paris on Nov. 13, carried out by French and Belgian citizens with the Islamic State claiming credit, changed maybe not everything but certainly his tone and emphasis. He has dialed down his oft-repeated “Assad must go” mantra. Defeating and destroying the Islamic State has become France’s urgent priority.

Hollande set out to pull together a “grand coalition” of all concerned states to achieve the defeat and destruction of the Islamic State a worthy goal if it were possible. But Hollande’s peripatetic travels this past week and his meetings with David Cameron, Barack Obama, Angela Merkel, Matteo Renzi and Vladimir Putin have made clear that the attacks in Paris have not changed the priorities of some potential allies in the fight. 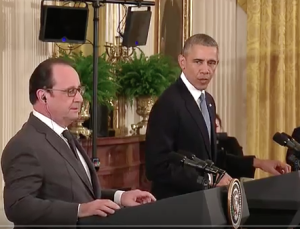 President Obama holds a joint press conference with President Hollande of France in the East Room of the White House on November 24, 2015. (Photo credit: Whitehouse.gov)

For the Sunni Gulf states, the priorities remain “regime change” in Syria (regardless of what might replace the regime), keeping Shiite Iran down and fighting perceived “Iranian proxies” (most notably now in Yemen).

For Turkey, the priorities remain “regime change” in Syria (regardless of what might replace the regime) and keeping the Kurds down, both in Turkey and in Syria.

For the United States and the United Kingdom, the priorities remain “regime change” in Syria (with little regard for what might replace the regime), keeping Russia down and keeping the Sunni Gulf states happy.

For Russia and Iran, the priorities remain preventing another Western “regime change” in the region (after the Western “successes” in Afghanistan, Iraq and Libya) and preserving the Syrian state, their long-time ally, and its state structures (with or without Bashar al-Assad).

For other countries without strong views on the merits or demerits of “regime change” in Syria, the Islamic State does not appear to be cause for undue concern. Their governments may also recognize that even modest or token involvement against the Islamic State would, without having any constructive impact, raise the risk of retaliation against their own people perhaps, as in Paris, by “their own people.”

For many Sunnis living in the Islamic State’s “caliphate” covering parts of Iraq and Syria the organization’s harsh, austere and often savagely brutal rule appears preferable to restored rule by what are widely perceived by Iraqi and Syrian Sunnis to be Shiite-dominated or even Iranian-dominated governments.

As for outside pressure, regional Sunni states currently show no interest whatsoever in deploying their own ground forces against fellow Sunnis. Western “boots on the ground” beyond being a politically hard sell after the U.S. experience in Iraq and Afghanistan is an avidly sought boon by the Islamic State, which would present itself as Islam’s defender against Western “Crusaders.” And it is widely recognized that aerial bombardments alone cannot defeat and destroy the Islamic State. So, what are Western states to do?

Perhaps, the best (though emotionally unsatisfying) option is to resist succumbing to hysterical calls for yet more and intensified Western violence in the Muslim world and for more restrictions on civil liberties at home, which are certain to stimulate more conversions to jihadi militancy while diminishing the quality of life for all.

Perhaps, the best course is for Western states to relax and accept that the Islamic State is an ugly reality that is here to stay, at least for some considerable time, that containment is the best that can be hoped for and achieved in the near term and that containment can best be achieved by the Iraqi and Syrian governments and their own military forces.

Perhaps, if the West’s sits back and waits, the Islamic State’s aura of excitement will wear off, it will become just one more failed state like so many other regional states in which the West has previously intervened and the peoples of the region might then be able to sort out their own problems in their own way.

Since, through its ill-conceived experiments on the Muslim world, the West has played the role of Dr. Frankenstein in creating the monster now called the Islamic State, it can be argued that the West has a moral responsibility to do everything in its power to right its wrongs in the region.

It would take a level of wisdom and courage rarely attained by Western politicians to recognize that, in the current circumstances and notwithstanding their moral responsibility, Western states can now achieve more by doing less and to act accordingly.

John V. Whitbeck is a Paris-based international lawyer who writes frequently on the Middle East.

← Is Assad Part of a Solution?
Ben Carson and the ‘War on Christmas’ →

14 comments for “Avoiding the Trap of Retaliation”