Sen. Rubio and most other Republican presidential contenders are competing with ambitious plans to launch a new U.S. military buildup, arguing that the modest cuts under President Obama have gutted America’s global strength, a dubious proposition that budget watchdog Chuck Spinney explores.

Attached herewith is presidential candidate Marco Rubio’s “peace thru strength” plan for “restoring” America’s defense. To be sure, this is only an opening shot in a Presidential bidding war that is sure to intensify in the coming months, with each candidate in both major parties trying to out-tough the others by spending more on defense (Bernie Sanders perhaps being the only exception).

Before reading Rubio’s piece of strategic wisdom, I urge you to think about the magnitude of what Rubio calls “$1 trillion in indiscriminate defense budget cuts.” Rubio’s $1 trillion total is for cutbacks in the Pentagon’s future projections of its defense spending plans, not the actual cutbacks from the spending peak in 2010. 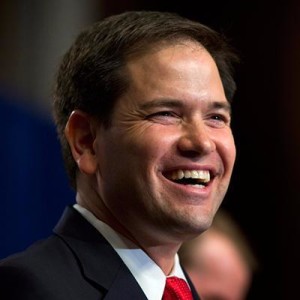 The graphic below places the actual cutbacks into a historical perspective: The chart shows that Department of Defense (DoD) spending declined by between $110 billion and $154 billion between 2010 and 2015, depending on if or how one chooses to account for inflation. 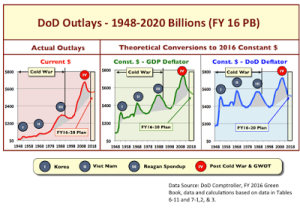 One can compare the reductions from the boom peak in 2010 (labeled #IV in the graphic) to those reductions after earlier peaks (#s I, II, & III). The effects of the $110 billion to $154 billion in cutbacks since 2010 are now embodied in President Barack Obama’s spending plan for 2016-2020 (highlighted in the yellow rectangle on the far right of each graph).

These cutbacks do not come close to accounting for the Pentagon’s bow wave* of financial requirements in the laundry list outlined by Rubio in his attached “policy” statement. The chart shows there is a boom-bust character to defense spending. The recent inflection point suggests we are approaching the end of the fourth bust and may be on the cusp of another or fifth boom.

Comparatively speaking, the current inflection in DoD’s spending trend shows signs of bottoming out at a much higher level than for any of the three preceding busts, all of which were conditioned in some way by the Cold War. Even the prominent spending hawk Loren Thompson recently characterized the current bust as being the “mildest defense downturn on record.”

Note that Thompson’s characterization of the most recent downturn as being relatively mild remains unchanged, regardless of how one accounts for the effects of inflation. This is true even if one uses DoD’s self-serving estimates of inflation which make the earlier budgets of the 1950s and 1960s look larger, thereby making the current budget look like less of a departure from past budgets.

Yet Sen. Rubio, R-Florida, suggests below the most recent cutbacks have been catastrophic in their effect. So, one might reasonably ask Mr. Rubio the following question: After spending all that money during the boom between 1997 and 2010, which happened to be the largest spending spree since the end of WWII, and given the relative mildness of the recent declines, why do you say it is now necessary to embark on a huge crash program to rebuild our defenses?

Could it be that the pissant “war on terror” has cost far more than either of the far more intense wars in Korea or Vietnam (intensity being measured in terms of optempos and forces deployed)?  And if so, Mr. Rubio, would you please explain why the the Global War on Terror cost so much more than Vietnam or Korea, or for that matter even World War I?

And why the diversion of money into GWOT resulted in a requirement for the kind of massive investment program you describe below, particularly in view of the fact that Congress set up a special contingency fund, separate from the Pentagon’s “base” budget to pay for the war on terror?

In short, Mr. Rubio, where did the money spent in boom #IV go? And how can you account for it, given that the Pentagon’s own bookkeeping system cannot pass an audit that links transactions to appropriations as required by the Chief Financial Officers Act of 1990 and the Accountability and Appropriations Clauses of the Constitution?

Such common sense questions, of course, will not be asked in any of the circuses passing for presidential debates, or by pliant reporters in the mainstream media, or by poohbahs on the Sunday talk shows. But if you want to get a hint of what these record budgets bought for the taxpayers, before the budget started declining in 2010, I would urge you to reread “Flush With Cash, Running on Empty (I),” posted last June.

Since no one will ask Rubio these questions, ask yourself, dear reader, “What kind of security will Rubio’s plan really buy for John Q. Average American?” Hint: Could the answer be more of the same, that is to say: (1) continued aging of weapons, (2) more shrinking of force structures, (3) increased pressure to cut readiness to bail out the imploding modernization program, and most importantly, (4) a continuation of ever intensifying budget crises fueled by cost growth to be exploited by demagogic ignoramuses who are in the hip pocket of the Military-Industrial-Congressional Complex?

*The term “bow wave” refers to a buildup of budget requirements in the future that is created by investment decisions made today. It is a chronic feature of defense planning and is created deliberately by the bureaucratic gaming strategies explained in Part III of my 1990 pamphlet Defense Power Games.

The bow wave of rising investment requirements sets up the conditions for a continual budget crisis that creates a pervasive atmosphere of pressure to raise defense spending over the long term. This budget pressure cooker has nothing to do with any external threats facing the United States but goes a long way in explaining the boom-and-bust pattern of defense spending.

Chuck Spinney is a former military analyst for the Pentagon who was famous for the “Spinney Report,” which criticized the Pentagon’s wasteful pursuit of costly and complex weapons systems. [The article appeared originally at his blog, The Blaster. This is the third in a series of occasional postings describing the political-economy of U.S. defense spending in the 21st Century. Postings I and II can be found here and here.]

As President, Marco will:

–Work to return to Secretary Gates’ fiscal year 2012 budget baseline over the course of his first term and begin to undo the damage caused by $1 trillion in indiscriminate defense cuts.

–Immediately begin to increase the size of the Navy to a minimum of 323 ships by 2024.

–Work with our allies in Asia to forward deploy a second aircraft carrier in the Pacific while increasing the carrier force from 10 to 12.

–Fully integrate the F-35B and push ahead with development of a new amphibious-assault vehicle.

–Build an amphibious fleet of 38 ships (from today’s 30) to meet the Marine Corps wartime lift requirement.

–Reverse reductions to the operating status of 11 of our 22 current cruisers.

–Invest in better Intelligence, Surveillance, and Reconnaissance capabilities at the theater and strategic levels.

–Develop and field the Long Range Strike Bomber capable of both conventional and nuclear missions to replace our current aging fleet of B-52, B-1, and B-2 bombers.

–Ensure that the KC-46 tanker program stays on track to replace the aging KC-135 fleet.

–Work to return a corps headquarters to Europe and station additional BCTs in Eastern Europe to deter Russian aggression.

–Reexamine the Army’s mobility and prepositioning to respond to crises in the Pacific.

–Continue to invest in Army Special Operations capabilities to remain at the cutting edge of the continuing war on terrorism.

–Maintain the Army’s proficiency across the full spectrum of war in order to combat state actors, defeat non-state threats, and shape the security environment to America’s advantage.

–Revamp the Army’s acquisition system and specifically look at options to modernize its aging vehicle and helicopter fleets.

–Reform the military benefit structure and military career paths and specializations to attract and retain high quality personnel to the military, while preserving a sustainable balance between training and procurement needs.

–Continue recent efforts to reform military retirement, education, and healthcare on the basis of the recommendations of the Military Compensation and Retirement Modernization Commission.

–Ensure the Department of Veterans Affairs is accountable and that our veterans have access to the best treatment possible when they return from the battlefield.

–Optimize the Pentagon workforce by shrinking the Pentagon bureaucracy and achieving the correct balance between uniformed personnel, civilians, and contractors.

–Facilitate a more-technologically agile and adaptable workforce that can leverage technological evolution.

–Develop fellowship programs in the private sector for defense department personnel to renew skills to comport with industry standards.

–Expand missile defense by speeding up deployment of interceptors in Europe, deploying a third site in the United States, and ensuring that advanced programs are adequately funded.

–Increase the Missile Defense Agency’s Research & Development budget and create a rapid-fielding office to focus on fielding directed energy weapons, railguns, UAV-enabled defenses, and other means to defeat a threat missile across its entire flight trajectory.

–Ensure continued freedom of access to space in the face of a potential adversary’s development of anti-satellite missiles.

–Pursue arms control only when it is in America’s interest and when prospective negotiating partners comply with their commitments to us.

Promote Innovation for the 21st Century

–Ensure U.S. military technological superiority by prioritizing key areas of defense technology that will counter those adversaries and competitors seeking to undermine our military predominance.

–Expand the use of rapid acquisition processes for key innovative technologies.

Posture the Force for the Cyber Era

–Improve cyber defense capabilities by hardening DoD systems and examining the sourcing of our weapons components.

–Outline a declaratory policy so our adversaries understand the consequences of attacking our computer systems.

–Improve offensive cyber capabilities and ensure that Cyber Command cyber mission forces have the tools and authorities to perform the cyber offensive mission.

–Better integrate cyber threats and cyber aspects of modern warfare in training, doctrine, and exercises across the combatant commands.

Ensure that the cyber threat is appropriately prioritized by all services; study whether cyber should be its own service rather than a mission of the Army, Navy, Marines, and Air Force.

← The Progressives’ Green Party Dilemma
Separating War from the Vets →