On the morning of Halloween, the New York Times broke the scary news that Republican presidential contender Marco Rubio had won a big jackpot: the endorsement of billionaire hedge fund investor Paul Singer. But aside from citing Singer’s praise for Rubio’s “message of optimism” and “work on the Senate Foreign Relations Committee,” the story offered little explanation of what could prove to be a decisive turning point in the GOP primary race.

On the policy front, Rubio clearly meets Singer’s requirement for a candidate who favors lower taxes on the rich and, even more important, a blank check for Israel’s right-wing government. With his hawkish stands on the Middle East, including fervent opposition to the Iran nuclear deal, Rubio had already won over another leading Republican “bundler,” New York attorney Phil Rosen, former chairman of American Friends of Likud and a believer that Israel’s conflict with the Palestinians “was, and will always be, a holy war.” 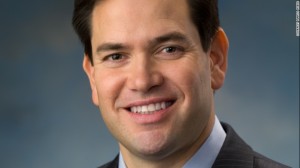 Rubio is a protÃ©gÃ© of Florida billionaire Norman Braman, who has contributed at least six figures to support the expansion of Jewish settlements in the occupied territories. Rubio reportedly leads the all-important “Adelson primary,” the race to tap the virtually unlimited cash box of gambling billionaire Sheldon Adelson, the single most prominent U.S. supporter of Israeli Prime Minister Benjamin Netanyahu.

All that is music to Singer’s ears, but Rubio’s “work on the Senate Foreign Relations Committee” is about something else altogether: his political support for Singer’s efforts to drain more than $1.5 billion dollars from Argentina in payments on old bonds that lost most of their value after the country defaulted in 2001.

Singer’s Elliott Management bought that debt several years ago for less than $50 million, and then successfully sued in U.S. court to demand full recovery of the face amount, in the face of opposition from the Obama administration, most other bondholders, and, above all, Argentina’s government, led by President Cristina Fernandez de Kirchner.

Singer, who is famous for his bare-knuckles tactics against foreign governments, has gone after Kirchner’s government on all fronts. Most strategically, he supported the highly questionable claims by an Argentine prosecutor that the Kirchner government tried to cover up the involvement of the Iranian government in the 1994 bombing of the Jewish community center in Buenos Aires, which killed 85 people.

The issue was perfect for a smear campaign: targeting alleged Iranian terrorism and government anti-Semitism, Singer could undercut the legitimacy of the one entity standing between him and huge profits on his speculative bond purchases.

Singer’s Elliot Management is a major backer of American Task Force Argentina, which advocates for full repayment of the Argentine bonds and has spent millions of dollars lobbying Congress. It also spends big bucks to blacken Argentina’s reputation.

As Huffington Post reported in 2013, the group “has launched a broad attack on Argentina in its PR campaign. Politico ad, paid for by ATFA, slammed the country as a safe haven for narcotics traffickers. Another ATFA ad accuses Argentine President Cristina Kirchner of making a ‘pact with the Devil,’ pointing to a legal memo between her country and Iran involving Argentina’s effort to prosecute Iranian defendants in a terrorism case.”

As one of its lobbyists told Huffington Post, “We do whatever we can to get our government and media’s attention focused on what a bad actor Argentina is.”

An investigation by Charles Davis for Inter Press Service showed that employees of Singer’s Elliott Management contributed more than $95,000 to Sen. Mark Kirk, R-Illinois, who wrote a letter denouncing President Kirchner’s agreement with Iran to investigate the 1994 bombing.

Rep. Michael Grimm, R-NY, who received $38,000 from Elliott Management employees, co-sponsored legislation demanding that Argentina’s bondholders receive full compensation, and called for an investigation of Argentina’s ties with Iran. Other recipients of Singer’s largesse — including AIPAC, The Israel Project and the American Enterprise Institute — also hammered the Kirchner government, virtually accusing it of anti-Semitism.

Last year, another member of Congress got in on the act: Sen. Marco Rubio. While grilling President Obama’s nominee as U.S. ambassador to Argentina, Rubio complained that Buenos Aires “doesn’t pay bondholders, doesn’t work with our security operations. . . .  These aren’t the actions of an ally.”

Adding a dig at President Kirchner, he added, “We have this trend in Latin America of people who get elected but then don’t govern democratically. Argentina is an example of this.” His speech triggered an angry response from Kirchner’s Foreign Minister Hector Timerman, an Argentine Jew, calling Rubio an “extremist.”

This May, Rubio introduced a resolution in the Senate suggesting that Kirchner conspired to “cover up Iranian involvement in the 1994 terrorist bombing.” Rubio declared that the issues in the case “extend well beyond Argentina and involve the international community, and more importantly, U.S. national security.”

As Eli Clifton noted, “It turns out that Singer’s hedge fund, Elliott Management, was Rubio’s second largest source of campaign contributions between 2009 and 2014, providing the presidential hopeful with $122,620, according to the nonpartisan Center for Responsive Politics.”

When Kirchner herself had the temerity this spring to link Singer to various neoconservative attacks on her policies, citing a “global modus operandi” to coerce foreign states, the reliably neoconservative editorial page of the Washington Post published an editorial reply titled, “Argentina’s President Resorts to Anti-Semitic Conspiracy Theories.”

To which Jim Lobe and Charles Davis, citing a long list of Singer connections to Kirchner’s critics, replied, “follow the money.” That advice, made famous in the movie version of Watergate’s Deep Throat, remains the best guide to understanding billionaire funding of candidates in the 2016 election.

← Sanders and the Denmark Model
Syria at a Crossroads →