Official Washington and its mainstream media push deeper and deeper into a Mideast fantasyland where mythical “moderate rebels” in Syria represent a real force rather than a P.R. cover for Sunni jihadists, all the better to bash the Russians for their military offensive, as Gareth Porter explains at Middle East Eye.

The U.S. response to Russia’s new Syrian military campaign in support of the Assad regime has struck a pose of moral superiority by arguing that the Russians have not been targeting the Islamic State but rather the non-ISIS Syrian opposition to the Assad regime.

That U.S. response is superficially accurate but deliberately misleading. Although the Russians are not focusing on targets in ISIS-controlled territory, there is a very good reason: it is not ISIS but the forces aligned with al-Qaeda’s Syrian franchise, Jabhat al-Nusra or al-Nusra Front, that pose the most immediate threat to the very existence of the Assad regime. 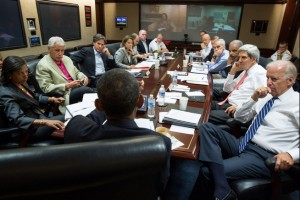 In a series of statements on the Russian military campaign, the U.S. Defense Department has hammered the Russians for not targeting ISIS as Moscow initially claimed – later on the Russian rhetoric shifted to “terrorists.”  The U.S. statements strongly implied that it was the U.S.-backed “moderate” Syrian groups opposed to the Assad regime that are being attacked.

Major news media have taken the same line in covering the Russian offensive. In an Associated Press story on Oct. 13, for example, reporter Ken Delanian described the CIA as supplying “so-called moderate rebels to oppose Assad” for more than two years, along with its “Arab allies” and that American officials “have watched in recent days as the Russian bombs and missiles have targeted those groups.”

Delanian even quoted Jeffrey White of the Washington Institute for Near East Policy (WINEP), the think tank supporting Israeli interests, who complained that the United States had abandoned its moderate allies. “We’ve aligned ourselves to these guys, we trained them and paid them and sent them off to battle, and when the going gets tough, we’re not there,” said White.

But this framing of the issue fundamentally misrepresents the situation in Syria by conjuring up a non-existent powerful U.S.-backed “moderate” force while diverting attention from the real threat posed by al-Qaeda’s Syrian franchise. The Russians are not hitting some imaginary set of “moderate” Syrian armed groups opposing the Assad regime; they are overwhelmingly focused on targeting the military command in which al-Nusra Front is the central strategic force.

The maps pinpointing the locations of the Russian strikes since Sept. 30 published in various newspapers and on the website of the Institute for Study of War – the original source for the other maps  all show very clearly that they are overwhelmingly concentrated in Idlib province, the adjoining Hama province, and areas of Latakia province near Idlib.

But that fact does not take on significance unless it is recalled that the al-Nusra Front – al Qaeda’s franchise in Syria – and the “Army of Conquest” linked to it, unexpectedly took control of Idlib province in a major military offensive in March.

That victory in Idlib was widely reported at the time to be the biggest turning point in the Syrian war in well over two years and to represent by far the most serious challenge to the Assad regime since the beginning of the war. And although a number of smaller commands were involved in the Idlib offensive, al-Nusra Front’s 3,000 troops represented the majority of the forces involved in the fight. And according to a well-informed source, al-Nusra and its close jihadist ally Ahrar al-Sham accounted for 90 percent of the troops.

We now know, moreover, that the Idlib campaign was the direct result of a policy decision by Saudi Arabia and Qatar, with U.S. approval, to support the creation of the “Army of Conquest” and provide it with new military hardware that was a crucial factor in that campaign: the TOW anti-tank missile.

Liz Sly of the Washington Post revealed in a story on Oct. 11 that TOW missiles had been delivered to Syrian armed groups under a program coordinated between the CIA and the Saudis. Sly further notes that the CIA-supplied TOW missiles were so important to rebels who made “gains in northwest Syria” that they have called the missile the “Assad Tamer.”

“It is no accident,” Sly reported, “that the first targets of Russian airstrikes in Syria were the locations where rebels armed with TOW missiles have made the most substantial gain and where they most directly threaten Assad’s hold on power.” That is an obvious reference to the forces that took over Idlib province in March.

But Sly never refers to the “Army of Conquest” victory in Idlib or acknowledges that al-Nusra Front was the main benefactor of the CIA program. Her story quotes a proponent of the program, former U.S. Ambassador Robert Ford, as assuring us that the system prevented the missiles from “falling into extremist hands,” and that he was aware of only two TOW missiles having been obtained by al-Nusra.

Sly reported a very different story in March, however, after the dissolution of Harakat Hazm, the main CIA-supported “moderate rebel group” remaining in the north, following its complete defeat by al-Nusra Front. The victorious al-Nusra announced publicly, according to Sly’s report, that it had seized the TOW anti-tank missiles the CIA had supplied to Harakat Hazm when it occupied the group’s headquarters near Aleppo.

Moreover, the Saudis reportedly had ownership of TOW missiles, and they and the Qataris had already been funneling arms to al-Nusra Front, as Vice-President Joe Biden revealed in October 2014.

It is astonishing that at this late date, anyone in the media could still be seriously suggesting that the CIA somehow managed to turn the “moderate” Syrian rebels into a powerful offensive force threatening the Assad regime in the north. Since the Idlib victory, it is generally understood that the primary threat to drive the Assad regime from power comes from al-Nusra Front and the forces allied with it, and not from the Islamic State – and certainly not the mythical “moderate rebels.”

It is easy to understand why the Obama administration is not interested in talking about the role of al-Nusra in the present Syrian political-military situation. According to Sly’s source, the covert operation to provide the TOW missiles to the Army of Conquest was aimed at putting “sufficient pressure on Assad’s forces to persuade him to compromise but not so much that his government would precipitously collapse and leave a dangerous power vacuum.”

The Obama administration strategy on Syria assumed a degree of control that is so obviously unrealistic that it was inherently risky to the point of recklessness. That is why no one in the administration or the news media is discussing the reality that the Russian offensive is targeting the biggest jihadist threat to the Assad regime.

Gareth Porter is an independent investigative journalist and winner of the 2012 Gellhorn Prize for journalism. He is the author of the newly published Manufactured Crisis: The Untold Story of the Iran Nuclear Scare. [This article first appeared at Middle East Eye, http://www.middleeasteye.net/columns/obama-won-t-admit-real-targets-russian-airstrikes-386489294]

← The Reckless Guns of October
Kicking War Cans Down the Road →

16 comments for “US Make-Believe in Syrian War”